In May 1944, Mrs. Kelsey participated in the centenary celebration of the Declaration of the Bab, held at the Baha'i House of Worship in Wilmette, Illinois. At the invitation of a friend, she moved to Kansas, where she remained until the call for pioneers came at the beginning of the Ten Year Crusade in 1953.

Olivia was born on her family farm in Ohio. She was 11 years old when her mother died, soon after she left home to live with a maternal uncle and his wife in Cleveland, Ohio. She completed her education and went to New York City with a classmate who was interested in a career in the theatre.

Through an extraordinary chain of events she met Madama Ada Dow Currier, the great Shakespearean teacher, and began to prepare for a career as a Shakespearean actress. Olivia performed various roles under the heading “Heroines of Shakespeare” in New York, all produced under the direction of Madame Currier. Her studies in drama and music continued for 12 years.

Troubled by religious conflicts in her home, Olivia said she often wondered about religion and why the great Founders who had appeared throughout history did not appear again. The answer to her question came when she met Francis Arthur Kelsey and learned of the coming of Baha’u’llah. She and Mr. Kelsey were married in 1929, and three years later she formally embraced the Faith.

The Kelseys’ home in New York became a center of Baha’i activity and hospitality. Olivia began writing poems and articles on various subjects, some of which were published in World Order magazine: “The American Indian,” “Glimpses of Sweden,” “In the Mirror of Creation,” and “Poverty or Wealth?”

A religious-historical drama depicting the early history of the Faith, entitled “Two Shall Appear,” was published, as were a pageant entitled “Had They Believed,” a scenario, “A Universal Language,” and a satire, “Gulliver’s Return.”

It was during her years in New York that Mrs. Kelsey compiled the material for her book, Baha’i Answers, which was published (with the approval of the National Spiritual Assembly) in 1947. The book is a collection of 95 questions about the Faith with answers compiled from the writings of the Bab, Bahá’u’lláh and ‘Abdu’l-Baha. It is presently scheduled for republication with new material owing to the growth of the Faith.

She became deeply interested in animal welfare, with her source of inspiration a Tablet from ‘Abdu’l-Baha to Roy Wilhelm on kindness to animals. She quoted from the Tablet on all of her many talks over radio and television on behalf of local and national humane organizations, and while pioneering in Monaco during the Ten Year World Crusade she presented a copy of the Tablet to Prince Rainier and Princess Grace.

After Arthur Kelsey’s death in 1937, Olivia began her long service as a Baha’i pioneer. Under the first Seven Year Plan (1937-44) she pioneered to Louisville, Kentucky, at the direction of the National Teaching Committee. She worked in many communities there and helped many others with public information and public relations, two subjects that engrossed her attention during her entire 50 years in the Faith. From the beginning she made efforts to reach small town newspapers, even going to the towns to make personal contacts.

In May 1944, Mrs. Kelsey participated in the centenary celebration of the Declaration of the Bab, held at the Baha’i House of Worship in Wilmette, Illinois. At the invitation of a friend, she moved to Kansas, where she remained until the call for pioneers came at the beginning of the Ten Year Crusade in 1953.

She retired from her profession and left the U.S. in March 1954 for Monaco, for which service she was given the honor of being named a Knight of Bahá’u’lláh by the beloved Guardian, Shoghi Effendi.

She made a pilgrimage to the Holy Land in 1954, and while she was there the Guardian told her that, after the first Baha’i Assembly was assured in Monaco, she could go to France to teach the Faith there. And so in 1959, in response to a call from the Hands of the Cause, she went to Toulouse and later to Montpelier to help the Baha’is in those cities. During her years in Monaco and France she attended many European summer schools, the Frankfurt Conference in 1958, and the World Jubilee in London in 1963.

In failing health, Mrs. Kelsey returned to the U.S. in 1964, at the age of 75, and settled in Columbus, Ohio, where she devoted herself particularly to publicity work and extension teaching.

When the Five Year Plan was launched in 1974, she was able to fulfill her wish to go to South Carolina and West Virginia on teaching trips. She was then 85 years old. 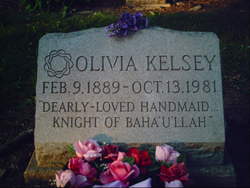 No longer able to live alone, Mrs. Kelsey spent her last few years with friends in Xenia and Yellow Springs, Ohio, and her final months at the Friends Care Center in Yellow Springs. But neither ill health nor limited means slowed her will to teach or her devotion to the Cause she loved. Until the day she passed to the Abha Kingdom she was actively teaching her nurses and all who came in contact with her. [1]