His first job was in a government office in Washington D.C., while he attended night school. He became a member of the first National Youth Committee in the United States. Later, he attended Northwestern University and received a MBA. He became a professional economist. When he was twenty two years old, he was appointed to the National Teaching Committee of the National Spiritual Assembly of the United States and Canada. 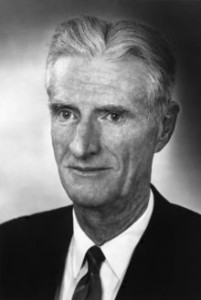 Paul Haney was born to Mary (Merriam) Ida Parkhurst and Charles Freeborn Haney on August 20, 1909. His parents were active Bahá’is since 1900 and had been married for seventeen years at the time of Paul’s birth. His mother accredited a portion of his spiritual development to being in the presence of ‘Abdu’l-Bahá while a fetus.

“We know little of the effects of pre-natal influences on the soul and not enough about those of childhood, but the indications are that it would be hard to overstate them.  Paul’s entire environment, from that first embryonic visit to the Master, was entirely Bahá’i, focused on the Center of the Covenant and later on the Guardian.”

In letters between his mother, Merriam, and Rúhíyyih Khánum it was indicated that the Master gave him his own name; it was ‘Abdu’l-Bahá.  He was also given the name Paul by the Master to be used in the outside world.  In 1919, Corinne True was able to also confirm that the master gave Paul his name.

In several tablets, the Master refers to Paul:

“The newly born babe is blessed., and accepted in the Divine Kingdom.  He is a servant of the Blessed Perfection and belongeth to Him.  Thank God for having been confirmed to attain such a blessing. . . I ask God that my namesake, ‘Abdu’l-Bahá, may grow and develop day by day and that his radiant face may be illumined with the light of the greatest bestowal. . .  It was also noted that. . . thy dear son, Paul, feeleth greatly attracted to the Kingdom of Abha.  This news imparteth the utmost joy and happiness. . .  Send Paul to school; I hope he will become a verdant and fresh plant in the Abha Paradise. . . “

Paul’s father died when he was only ten years old.  He was then raised by his mother, Merriam, with devotion, often under great financial difficulties, turning to the Center of the Covenant.  Service to the Cause became his quest in life.  At one point, when Paul was attending middle school, he had to assure his mother not to worry because there was no attraction to the wild life which so many youth feel to be necessary proof of their manhood.  He enjoyed being decent and achieved a state of spiritual mindedness. 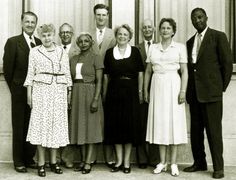 Paul took up an active part in conferences, conventions and summer schools.  He was able to form a close relationship with Mary Maxwell, whom he met along with other Bahá’í children at the Green Acre Bahá’í School.  His mother and he moved into a small apartment in Washington D.C. in order to assist in organizing the first Convention for Amity Between the Colored and White Races, held in May, 1921.

His first job was in a government office in Washington D.C., while he attended night school.  He became a member of the first National Youth Committee in the United States. Later, he attended Northwestern University and received a MBA.  He became a professional economist. When he was twenty two years old, he was appointed to the National Teaching Committee of the National Spiritual Assembly of the United States and Canada.

He published an article in the January 1934 issue of the Bahá’í magazine: ‘The Economic organization of Society in the New World Order’. 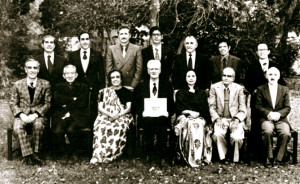 Paul married Helen Margery Wheeler, a Bahá’í he met at the Green Acre Bahá’í School, on July 15, 1942.  They resided in Washington D.C., not far from Merriam, until moving to the Holy Land, in 1958.  He became one of the founders of the Caesaria Golf Club and often would act as a judge in competition and tournaments; one was an annual event for a trophy presented by the Bahá’í community of Haifa.. 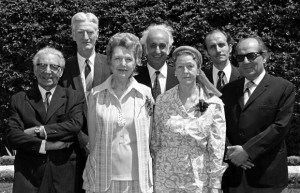 Paul Haney received the appointment on March 19, 1954, by Shoghi Effendi as a Hand of the Cause of God.  Thus the next three years were complete service to the Bahá’í world community.  He attended on behalf of the National Spiritual Assembly of the United States the Convention of South and West Africa in April, 1956.  He represented the Guardian during the first Alaskan Convention that was held in Anchorage, in April, 1957.

The Universal House of Justice was first elected in 1963, and one of its first actions was to invite five of the Hands of the Cause of God to remain in the Holy Land as advisers and to carried out specific duties.  Paul was one of the five, and his first appointments were to the Editorial Committee. He represented the Universal House of Justice at the fifty-sixth Annual Convention of the United States in 1965.  He traveled throughout the world representing the Supreme institution. He took part in all four International Conventions held during his lifetime and chaired the opening session in 1968.

On September 1, 1965, Merriam Haney passed away to the Abhá Kingdom.  This was indubitably a great loss for Paul.  He entailed considerable sacrifice for his dedication to the Cause, pressing onward, being sound in his judgment.  He again traveled throughout the world representing the Universal House of Justice, advising, instructing, and encouraging the friends with their activities.  He attended diplomatic and governmental functions in Jerusalem as a representative of the Bahá’í World Center; he played a great part in the development of the Continental Board of Counselors and latter, the International Teaching Center.  In 1982, he represented the Universal House of Justice at the Continental Conferences Quito, Ecuador, Costa Rica and Panama.

Paul Haney met death suddenly and instantly on December 3, 1982 from injuries sustained in an auto accident in Haifa. [1] 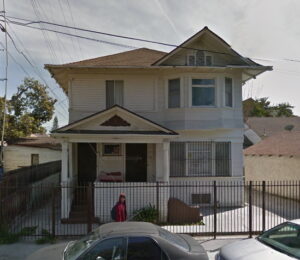 Paul’s father, Charles Haney applied for a passport on January 2, 1909 as a resident of Los Angeles, California working as a banker. This fact was provided by Don Calkins and he also added that the 1910 Federal Census lists Charles, wife Mary P and son Paul living in LA on April 21, 1910 at 2022 Doberman Street. The address still exists and its upstairs duplex. Please see photo.

Source:
1 Francis, Richard. “Life of Hand of the Cause of God and “Father of Victories” Bahai-Library: Winters, Jonah

TagsBaha'i Hand of the Cause of God Paul Haney
FacebookTwitterPinterestLinkedIn