Shu’á’u’lláh ‘Alá’í ‘s early studies were undertaken at home with a private teacher and at the age of ten he was sent to the newly-opened Tarbiyat school in Tihran. Later he attended medical college but he soon left it to pursue his study of accountancy. At the age of nineteen he was appointed financial oflicer of the Police Department. From 1914 to 1919 he served as treasurer of the Ministry of Justice and, for twenty—five years, as comptroller and chief financial officer of the army, rising to the rank of General. 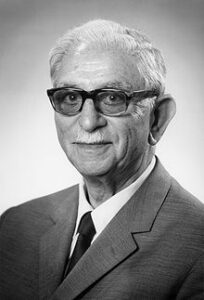 Shu’á’u’lláh ‘Alá’í was the second son of Muhammad Nazimu’l—Hukama (known as Siyyid Muhammad Nazimu’l-Hukama) and Khadijih (better known by the familiar ‘Bibi Jan’). The father of Shu’a‘u’llah ‘Ala’i who held several degrees in theology was supposed to become a divine in keeping with family tradition. Learning that his intimate friend, ‘Andalib, had embraced the Bahá’í Faith (he would go on to become a famous Bahá’í teacher and poet), he attempted to bring him back to what he considered to be the right path but in so doing became converted and subsequently confirmed after receiving a Tablet spontaneously addressed to him by Bahá’u’lláh and delivered by Jinab-i-Samandar, the father of the late Hand of the Cause Tarazu’llah Samandari. Siyyid Muhammad Nazimu’l-Hukama was nineteen years of age. Filled with zeal for the Bahá’í Cause and fearless in proclaiming it he was, soon after his conversion, condemned to death as a heretic at his birthplace, Lahijan (Gilan), but he escaped to Tihran, and in time became a physician attached to the court of the §_hah. Shu‘a‘u’llah ‘Ala’i’s mother was related to the learned Mirza Ahmad Azghandi of Khurasan, one of the early believers referred to in The Dawn-Breakers (pp. l25—l27, 184).

In his eighty-fourth year, in an interview conducted by Faridih Subhani and Nasrin Radavi, Shu’á’u’lláh ‘Alá’í (his first name means ‘ray of the sun of divinity’) related:

‘I was seven years old when ‘Abdu’l-Bahá, in reply to a letter written by my father, revealed a Tablet in His own handwriting, a copy of which was given to me by my father. I was told to memorize the Tablet. I did memorize it and now at the age of eighty-four I still remember it. It has been my guide and refuge in life.’ He then chanted, with great feeling, the Tablet whose words set out the blueprint of his Bahá’í life and service:

O flame of the love of God! The ray must shed light and the sun must rise; the full moon must shine and the star must gleam. Since thou art a ray, beseech thou the Lord to enable thee to give illumination and enlightenment, to brighten the horizons and to consume the world with the fire of the love of God. I hope that thou mayest attain such a station, nay surpass it. Upon thee be His glory.

Shu’á’u’lláh ‘Alá’í ‘s early studies were undertaken at home with a private teacher and at the age of ten he was sent to the newly-opened Tarbiyat school in Tihran. Later he attended medical college but he soon left it to pursue his study of accountancy. At the age of nineteen he was appointed financial oflicer of the Police Department. From 1914 to 1919 he served as treasurer of the Ministry of Justice and, for twenty—five years, as comptroller and chief financial officer of the army, rising to the rank of General. He assisted in the reorganization and modernization of the Ministry of Post and Telegraph, and aided in streamlining a number of Government agencies. He was on the boards of directors of Bank Melli Iran (the National and later the Central Bank) from its inception in 1927, and that of Bank Sepah for three decades. His trustworthiness and integrity were proverbial and the Government of his country often charged him with delicate commissions. For example, when an inventory of the Crown jewels (valued at $7 billion) was made, he was asked to supervise the exacting task.

At the age of twenty-three he married his cousin, Furughiyyih ‘Ala’i, a remarkable woman of great sagacity, patience and practicality. Five children were born of their union: Hishmat, Mihrangiz, Bihjat, Farahangiz and Shu’á’u’lláh ‘Alá’í was merely eighteen years old when he was appointed as a member of a committee called ‘Mahfil-i-Muratib’, the responsibility of which was to conduct Bahá’í meetings in Tihran and to assume some of the functions of a Local Spiritual Assembly. In 1913 he was elected to serve on the Local Spiritual Assembly of Tihran and his membership continued until 1943 without interruption save for short periods when he was away from the city. He pioneered with his family to Tajrifl, a village in the suburbs of Tihran, in 1944, and was elected to serve on the Local Spiritual Assembly there.

He visited the Holy Land twice, once in 1923 en route to Europe on a Government mission, when, in the absence of the Guardian, he was received with great kindness by the Greatest Holy Leaf, and on a second occasion in 1952 when he and his wife made their pilgrimage.

In 1934 when the National Spiritual Assembly of Iran came into being he was elected to serve on it and continued to do so until the time he was called by the Guardian, who had already entrusted him with numerous delicate assignments within Iran and which he discharged with complete integrity, to assume world-wide responsibilities. He was one Of the second contingent of Hands of the Cause appointed by Shoghi Effendi On February 29, 1952. Almost immediately he began his international travels, commencing with attendance at the four International Conferences held in 1953 in Kampala, Wilmette, New Delhi and Stockholm, with visits to centres in the United States, Germany, Italy, Switzerland, Holland, India, Pakistan, North Africa and the Middle East. In 1956 he toured centres in India, Ceylon, Indonesia and Malaya and participated in the first Southeast Asia Teaching Conference in August of that year. In subsequent years, in addition to his wide travels on behalf of the Cause and his invaluable services in Iran in connection with the management of the extensive properties of the Faith there, including the Holy Places, and often calling for important negotiations with the Government, he represented the beloved Guardian at the National Convention Of Pakistan (1957), and the World Centre at the National Conventions of CO1ombia and Jamaica (1961) and of Ceylon (1962).

The protection of the Cause in the country of its birth was a principal concern of General ‘Ala’i, particularly during the turbulent decade of the seventies, but his international travels continued without abatement, taking him, in 1975, to the United Kingdom and Europe where he met the Bahá’í friends and addressed public meetings. In various centres in Germany he was introduced to a number of distinguished Orientalists who accepted Bahá’í literature for university and State libraries. He was able to leave Iran for visits to the Holy Land and for consultation with the International Teaching Centre in 1977 and again in 1978, and was present at the International Convention at Riḍván 1978. He took up residence in France in late 1978 and attended the National Convention of the Bahá’ís of Austria in 1979.

In January 1981, General ‘Ala’i settled in Scottsdale, Arizona, U.S.A., where, on November 16, 1984, the ninety-sixth anniversary of his birth, he passed away peacefully surrounded by close members of his family and devoted friends. He had, for over seventy years, served the Cause of Bahá’u’lláh and his native country, Iran, honourably, faithfully, courageously and with unquestioned fidelity. The many priceless services he rendered through a long and full life, and his unique character, were encapsulated in the cable sent by the Universal House Of Justice to all National Spiritual Assemblies on November 18, 1984: