On reading this Tablet, Ahmad knew what was expected of him. He surrendered his own will to Bahá'u'lláh's and instead of completing his journey to Andrianople and attaining the presence of his Lord, he returned to Persia with the sole purpose of teaching and propagating the Message of Bahá'u'lláh to the Bábí community." 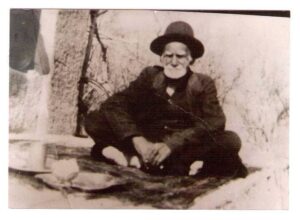 While in his teens he felt a great attraction towards mysticism and would seclude himself to commune with God, with his greatest hope being: to face the promised Qá’im. He often associated with dervishes and ascetics who claimed to possess some divine insight. His father and family, being orthodox Muslims became concerned and tried to persuade him to be less ascetic.

Ahmad left home (ran away) and at around age twenty, traveled to India in the garb of a dervish . He stayed with a baker in Bushir, who claimed to hold a great station in the spiritual realms. However, Ahmad soon left for Bombay and continued an ascetic lifestyle where he evidently becomes disappointed with the mystics. After prostrating himself and chanting the verses of the Qur’an twelve thousand times and not finding the object of his quest, he returned to Persia and made his home in Kashan, married, had a son and daughter, and worked as a hand-weaver.[1]

After numerous years he heard news of the Báb from Shiraz and after making inquires, maintained a strong urge to investigate. A traveler (probably a Bábí himself) told him to proceed to Mashhad where he met Mullá Sadiq-i-Khurasani and acknowledged the Message of the Báb. He was instructed to return to his wife and children in Kashan. There he discovered that Hájí Mírzá Jani, whom he had known for some time, was also a Bábí.[1]

The Báb stayed two nights in Hájí Mírzá Jani’s home while being escorted from Isfahán to Tehran. Ahmad was finally able to attain the presence of his Lord. Soon, the number of Bábís in Kashan considerably increased and the persecutions started. Ahmad hid in a cooling tower for forty days while friends brought food and water in secret.[1]

He escaped and traveled to Baghdad and reached the residence of Bahá’u’lláh. There, he documented accounts of the last months of Bahá’u’lláh’s stay in that city. He stayed in the close proximity to the Blessed Beauty for six years. He also remained in that city for some time after Bahá’u’lláh’s departure to Constantinople.[1]

Ahmad longed to attain the presence of His Lord again and traveled on to Constantinople. By this time, Bahá’u’lláh was in Adrianople where he sent him the Arabic Tablet of Ahmad. [1]

On reading this Tablet, Ahmad knew what was expected of him. He surrendered his own will to Bahá’u’lláh’s and instead of completing his journey to Andrianople and attaining the presence of his Lord, he returned to Persia with the sole purpose of teaching and propagating the Message of Bahá’u’lláh to the Bábí community.” [2]

A great number of (approximately two thousand) Bábís recognized the station of Bahá’u’lláh through Ahmad’s dedicated efforts and teaching work. Some of the Bábís even showed hostility toward the Bahá’i teachings and bore physical threats.[1]

Ahmad then lived and worked in Kashan and carried the original tablet on his person. His wife died and his daughter married an official to the court of Nasiri’d-Din Shah in Tehran. His son, who died shortly after Ahmad became a Bábí, left a grandson, Jamal in his care. Jamal become a lifelong, steadfast Bahá’i.[1]

Ahmad then went to Shiraz and later to Nayriz where he remarried and lived for about twenty years. He wanted to see his daughter in Tehran and arrangements were made for him to stay in Munj. By this time he was well into his nineties and was still maintaining utmost health and vigor, spending most of his time in meditation on his Tablet. He stayed in Munj for four years before he was able to travel to Tehran and also visited Qázvin. He lived to be over one hundred and passed away in 1902. His date of birth was unknown and one account placed his age at the time of his death to be one hundred and thirteen.[1]

Image:
Undisclosed image. Source and Authentication will be updated.