During World War I Tudor Pole served in the Directorate of Military Intelligence in the Middle East and was directly involved in addressing the concerns raised by the Ottoman threats against Abdu’l Baha Abbas which ultimately required General Allenby altering his plans for the prosecution of the war in the Palestine theatre.

Even as a small child, Wellesley experienced psychic phenomena and was widely teased at school for this. The family moved to Weston Super Mare, where Wellesley and Alex were born. Wellesley was sent to Blundell’s school in Devon and hated every minute of it. His older sister Mary was an ardent antivivisectionist, and Katharine seemed set on a career in music. Wellesley left school and joined the family grain business, Chamberlain, Pole and Co. [1]

At age 18, Wellesley dreamt of Glastonbury and began to travel to the area, returning as often as he could, and making contact with people with similar interests to his own. He met John Arthur Goodchild, and became determined to find a ‘triad of maidens’ to help him search for a holy relic. In 1904, he took Katherine to Glastonbury, and shortly afterwards, he met Katherine’s friends Janet Bevill Allen and Christine Allen. Wellesley knew he had found his ‘triad of maidens’.

Wellesley’s ‘triad of maidens’ were more than happy to participate in the discovery of the Glastonbury Cup. [1]

Between the two World Wars, Wellesley looked after the Glastonbury Cup, and from time to time, his ‘Quest Group’ embarked on excavations or lines of enquiry to ascertain the origin of this vessel.

Wellesley kept his psychic life well separated from his professional and business life, though like his father Thomas, the children were carefully raised to respect all faiths. Wellesley was concerned for the future of the environment, the need to farm organically, and the dangers of nuclear energy.[1]

Wellesley Tudor Pole sought the presence of  ‘Abdu’l-Bahá in Alexandria during His first sojourn in Egypt in 1910 —  at that time he wanted to find out more about the Faith and the mysterious personage of the Master. In The Silent Road, Tudor Pole describes a curious incident that occurred during his visit. He writes:

I asked the master to give me his blessing for the journey that lay ahead of me. This he did, adding casually that I should be returning to Marseilles on the following day on the same steamer from which I had so recently disembarked. I then explained to the interpreter that I had made other arrangements and that all my overland bookings had been made. He replied to the effect that if the Master said I had to return to Marseilles now then that was what would happen. […The Master] then requested me to carry out a commission for him on reaching Paris. He said that there I should meet a certain Persian student who was nearly blind, and he gave me […] gold to pay his fare to Alexandria. (Travelling was much cheaper in those days) I was to tell this young man, whose name was Tammadun ul Molk, to lose no time and to present himself to his master as soon as he arrived. I accepted this commission with very bad grace because it seemed a poor reason for upsetting all my previous plans. When I asked for the student’s address in Paris I was told that this was unknown, but that a way would be found for bringing me into contact with him.

On reaching Paris I went to the Persian Consulate, only to find that Tammadun ul Molk was unknown to the officials there. I then visited the students’ quarter on the left bank of the Seine and spent the whole day there and elsewhere in a task that yielded no results whatever… I gave up the search and set out for the Gare du Nord where my luggage was already deposited in readiness for the return to England. En route I crossed the Seine by the Pont Royale. Happening to look across the bridge to the opposite pavement, I saw, among a crowd of pedestrians, a young man, evidently of Eastern origin, who was using a stick to tap his way along. I dodged through the traffic and accosted him. In reply to my question, he told me he was of Persian origin. I then enquired whether by chance he knew a certain Tammadun ul Molk. In surprise he replied ‘C’est moi, adding that he had only arrived in Paris from Vienna that very morning. In a Vienna clinic three serious operations on his eyes had been undertaken, but the results were negative and he had been told by the surgeon that his sight could not be saved.

I then gave ‘Abdu’l-Bahá’s message and […] his ticket to Alexandria. To watch the profound joy on his face was more than sufficient reward for all my previous disappointments, including the abandonment of my European tour. Tammadun duly reached Alexandria and visited his master at once. Those present told me later that Abdul Bahá poured a few drops of attar of roses into a glass of water. He then gave the youth his blessing whilst anointing his eyes with the water in question. Immediately full sight was restored, and when I met Tammadun some years later he was still enjoying perfect vision.[2] 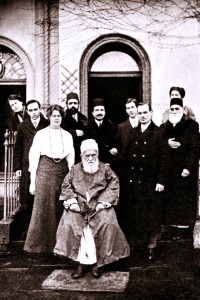 In 1911, Wellseley’s father Thomas died, and in 1912, Wellesley married Francis Snelling, who had suffered terribly doing work for the poor, and had lost a lung. By 1921, Wellesley and Florence had three children, Jean, Christopher and David, and the family moved many times during these years.[1]

When ‘Abdu’l-Bahá Abbas traveled to the West, Tudor Pole spoke the English translation of his first talk on the evening of September 10, 1911.[1]

During World War I Tudor Pole served in the Directorate of Military Intelligence in the Middle East and was directly involved in addressing the concerns raised by the Ottoman threats against ‘Abdu’l-Bahá Abbas which ultimately required General Allenby altering his plans for the prosecution of the war in the Palestine theatre.

After the War, Tudor Pole began his writing career with Private Dowding which dealt with a soldier and his afterlife, and instituted The Silent Minute (in collaboration with Winston Churchill) which united the British people each evening at 9 p.m. at the chiming of Big Ben on the radio.[1]

Then came The Lamplighter Movement. These led to the Remembrance Day observance.

In 1921, while Tudor Pole was Secretary of the Local Spiritual Assembly in London, the telegram announcing the passing of ‘Abdu’l-Bahá Abbas by his sister, Bahíyyih Khánum, arrived at Tudor Pole’s home in London and it was there read by Shoghi Effendi.[1]

In 1922 he began a long association with a project aimed at relieving the oppression the Bolsheviks on religionists in Russia. (See also Bahá’í Faith in Turkmenistan.)[1]

Returning to his searches through the Middle East, Tudor Pole aided in the modern day identification of the site of the ancient Boukoleon Palace, also known as the House of Justinian.[1]

In 1959 Tudor Pole founded a group preserving the Chalice Well and Bride’s Mound of Glastonbury, England.

Tudor Pole especially wrote several books investigating spiritualist approaches to faith and the meaning of the times until his passing in 1968 and works relating to him continued to be published after his death.[1]