He organized public talks at a downtown auditorium at 3rd and Taylor in Portland and met with individuals. About 60 postcards were sent to the Baha'is in Chicago expressing interest in the Faith as a result of these meetings. 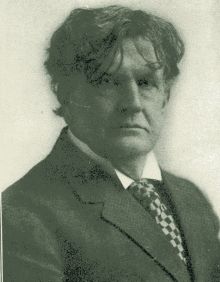 Nathan Ward Fitz-Gerald was a lawyer, poet and orator. He practiced law in Indianapolis, Washington DC, West Virginia (where he unsuccessfully ran for Congress and Governor), New York City and Los Angeles. In 1902, he became a Bahá’í. He was the first Bahá’í to arrive in the Northwest and moved to Tacoma, WA in 1905. Formerly a Millerite minister, Fitz-Gerald asked to address the Tacoma Minister’s Alliance in April of that year to deliver the news of this new Revelation from God. Undeterred by the chilly reception he received, he continued to spread this Message throughout the Northwest. During the month of March in 1906, he organized public talks at a downtown auditorium at 3rd and Taylor in Portland and met with individuals. About 60 postcards were sent to the Bahá’ís in Chicago expressing interest in the Faith as a result of these meetings.[1]

The first “Spiritual Assembly” originated out of public meetings at the Auditorium on 3rd and Taylor in downtown Portland organized by “Colonel” Nathan Ward Fitz-Gerald in March 1906. Colonel Fitz-Gerald was born on March 4, 1844 in Ripley County, Indiana. His mother was a devoted Millerite, a denomination of Christians who believed that according to Biblical prophecies as interpreted by William Miller, Christ would return in the year 1844. Thus, during the time he was in the womb of his mother, her thoughts were fervently centered on the subject of the coming of the Lord due at approximately the same time as her baby boy. Fitz-Gerald himself attributes his “mental make-up” to his mother’s passionate expectation during his gestation. Some of his earliest memories are of sitting at her knees hearing her speak of the promised Millennium when God would reign on earth turning it into Paradise.[2]

Nathan Ward Fitzgerald apparently produced a freelance Bahá’í magazine around 1905; and in 1900 Arthur P. Dodge, one of the New York Bahá’í leaders and founder of the New England Magazine produced The American, with the platform of the ‘Universal Brotherhood Party’ a nonpartisan movement of unity working for God’s Peace on Earth-not a Bahá’í publication as such, but clearly reflecting a Bahá’í viewpoint.[1]