Martha met with the queen eight times and in 1928 during one of these meetings Queen Marie gave Martha a stunning brooch as a gift. 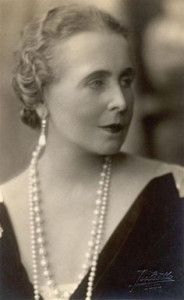 Queen Marie’s mother was the only surviving daughter of Tsar Alexander II of Russia and her father, Alfred, was the second son of Queen Victoria. She was born in Kent, England, the eldest daughter. She had one brother and three sisters. Her father was a naval officer so they moved around a lot. Queen Marie and her husband King Ferdinand had 6 children, three boys and three girls.

She learned of the Bahá’í faith from Martha Root, an American woman. Martha met with the queen eight times and in 1928 during one of these meetings Queen Marie gave Martha a stunning brooch as a gift.  The brooch was a gift originally given to the queen from her Russian relatives. I mention this brooch because Martha (with the queen’s consent) sent it to the U.S. so that it could be sold to raise funds for the Temple. Mr. Williard Hatch, a Los Angeles Bahá’í purchased it and later took it Haifa and gave it to Shoghi Effendi as a gift for the International Bahá’í Archives.

Queen Marie publicly proclaimed her support for the Bahá’í faith in three testimonies and in one such statement she wrote:

“If ever the name of Bahá’u’lláh or ‘Abdu’l-Bahá comes to your attention, do not put their writings from you. Search out their Books, and let their glorious, peace-bringing, love-creating words and lessons sink into your hearts as they have into mine.”

And I want to conclude with such simple words from Queen Marie, “Love, Faith, Courage – with these three we can win the world.”