Martha arranged for 'Abdu'l-Bahá to present a talk in Pittsburgh and was able to have two private interviews with him. The Master presented her with a white rose and infused her spirit with His love, for he must have sensed her gargantuan capacity for teaching the Bahá'í Faith. 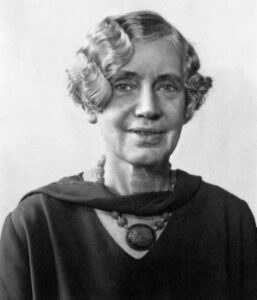 Martha had two older brothers and lived in Pennsylvania where her parents operated a dairy farm. Martha preferred to study books rather than engage in the girlie activities. She graduated from University of Chicago in 1895.

The family shortly afterward moved to Cambridgeboro, Pennsylvania and operated a dairy farm and numerous entrepreneurships.  As a child, Mattie was not interested in sewing, knitting or cooking as most young girls; she preferred to study books.  At fourteen, she earned enough money from writing to pay for a trip the Niagara Falls.  At sixteen, Martha graduated from Cambridgeboro High School and was honored for completing studies in orthography, reading, arithmetic, geography, grammar, Latin, algebra, geometry, and for having sustained a good moral character.  First, a trip to Europe, then to Oberlin College for five years where she designed her own program to include Latin, Greek, French, German, and English: literature, elocution, and rhetoric: finding time for psychology, mathematics and Bible studies.  In 1893, Mattie became a member of AElionian; and in 1895, without graduating from Oberlin, she went to the University of Chicago, published several literary essays and was awarded her baccalaureate degree.  This was all in the same year.

Martha’s first post was in Union City, Pennsylvania as a school teacher and principal of the high school.  She also published stories and in 1900 became the summer replacement for the society editor of the Pittsburgh Chronicle Telegraph.  That fall, she worked for the Pittsburgh Dispatch, launching her newspaperwoman career.  Later, she made another move to the Index of Pittsburgh Life, writing articles on automobiles.  In fact, she became entranced by them, with her first article appearing in the June 29 issue and concerned stables for automobiles. It was the houseless carriage, still “stabled,” not yet “garaged.” She sailed to France on the S. S. Statendam and reported on the motor scene there.  In May of 1902, Martha returned to Pittsburgh and continued writing automobile articles for the Index and latter for the Pittsburgh Gazette, acquiring the experiences that prepared her for the monumental task ahead.

Martha met Roy C. Wilhelm from whom she received Bahá’í literature and later met with several early believers, among them Thornton Chase and Arthur Agnew at a restaurant in Chicago, a place to become known as the “place of Saints and Sinners”.  After some months of concentrated research and contemplation, Martha became a Bahá’í in Pittsburgh in 1909.   This was a course change for Martha, opening new pathways into her mind.

In September, 1909, Martha wrote an extensive article for the Pittsburgh Post siting the history and teachings of the Bahá’í Faith.  In 1911, she participated in the first annual Bahá’í convention, held in Chicago.  But the single event that made the greatest impact on Martha’s early Bahá’í life was the visit to the United States of ‘Abdu’l-Bahá in 1911-12, where she attended as many meeting as possible.

Martha arranged for ‘Abdu’l-Bahá to present a talk in Pittsburgh and was able to have two private interviews with him.  The Master presented her with a white rose and infused her spirit with His love, for he must have sensed her gargantuan capacity for teaching the Bahá’í Faith.

One of Martha’s most memorable Bahá’í gatherings was the Unity Feast given by Roy Wilhelm in West Englewood, New Jersey on June 29, 1912.   She would often write to the Wilhelm’s in her gratitude to them for having included her in the picnic with ‘Abdu’l-Bahá. Another event that made a deep impression on Martha was a meeting with ‘Abdu’l-Bahá on one of His last nights in New York.  Also present was Vali’u’llah Varqa, the son of ‘Ali-Muhammad Varqa and brother of little Ruh’u’llah Varqa, father and son, martyred together in Iran.

‘Abdu’l-Bahá’s visit had greatly affected Martha and an outline for a world teaching trip was submitted and on January 30, 1915 she sailed out of New York on her first around the world teaching trip.  After traveling through many countries, she tried to see ”Abdu’l-Bahá in Palestine and visit the holy places in Haifa and Akká.  The authorities would not permit it.  Palestine was in a state of war and being occupied by German and Turkish troops and ‘Abdu’l-Bahá insisted that all Bahá’ís leave the area.

Martha traveled to Egypt and stayed around six months, working as a newspaperwoman, writing about the four to six thousand Jews, expelled from Palestine by the Ottoman Empire of Turkey and subsequently rescued by the U.S.S. Tennessee and brought to Alexandria.  Her interviews of the Jewish refugees gave reports of intolerable conditions imposed upon them preceding their flight and their political tormentors.  Martha also witnessed the military preparations that World War I created, such as the movements of thousands of troops and pieces of military hardware in Egypt on the way to embark for the Dardanelles; and to her astonishment, not one mention of this activity was made by the press.

In 1915, Martha made a visit to Bombay and latter Rangoon. In June of that same year, she traveled on to Japan at the invitation of Agnes Alexander, an American Bahá’í teacher there.  After a brief stop in Hawaii, Martha arrived in San Francisco on August 29, 1915 to conclude the first of many international teaching endeavors under the banners of Bahá’u’lláh.

In the year 1920, Martha encountered a confirming test of her faith by a misunderstanding between Agnes Parsons and herself in regard to planning the first “race unity” conference to have ever been held within the United States.  The concept of doing each one’s bidding for the sake of unity had backfired, resulting in upset and confusion.  Martha continued teaching by traveling to Saint John, Montreal, London, and Saint Thomas, Canada, to arrange programs.  She was also, at that time, appointed by the U.S. Bahá’í National Center, then known as the Bahá’í Temple Unity, to the Ideas Committee, assisted by Horace Holley, D. J. Hanko, Barbara Fitting, Edwar D. Kinney, and an addition of eleven other members.  Martha had to inspire them to come up with ways to raise money for the construction of the Bahá’í House of Worship in Wilmette.  She had the powers of experience and left no source of help untapped, including asking ‘Abdu’l-Bahá for His Blessing and Confirmations.

The work continued onward and onward. In 1921, Martha decided to write a book on the Faith.  She was in physical pain.  She was also having to care for her ill father.  Nine years earlier, she had developed breast cancer, and a unique prescription from ‘Abdu’l-Bahá probably aided it into remission.   This time however, it had focused in other areas.  But, despite her pain, she continued the work at a reduced rate.

Martha’s next teaching trip was Mexico where there was one Bahá’í, Mr. C. P. Forest, and then on to Guatemala in the middle of a political revolution.  She had arranged for an interview with the president of that country but before the set date, he was known as ex- President Herrera.

On the night of November 3, 1922, at the age of eighty-five, Martha’s father, T. T. Root passed on.  With an inheritance of some money, she had nothing to hold her back and divested herself of all that anchors one to the earth.  At the age of fifty, Martha Root left her home town of Cambridge Springs, Pennsylvania, and took up residency in the rest of the world.

The journeys begun and Martha traveled continuously, almost everywhere, throughout the United States, and Canada, then back to Japan.  She visited China.  Martha had eight thousand copies of ‘Abdu’l-Bahá’s statement on teaching the Chinese sent to friends all over the world. Agnes Alexander succumbed to Martha’s glowing word of Peking and its people and the two pioneers worked together.

The next stop was Australia, New Zealand, and Tasmania preceded by a short excursion to Hong Kong.  In Australia, she stayed with Clara and Hyde Dunn, pioneers from California.  The Dunns assisted her in regaining some of her health, not to mention assistance in the teaching work.

South Africa was the next place on Martha’s roster, where she received the red carpet treatment almost everywhere she visited.  Here she made several radio broadcast and held constant meetings. Martha also took some time to study Esperanto and “rested my brains.”

On November 28, 1921, the Master passed on.  In 1925, Martha’s attention was drawn to the beleaguered Guardian.  In the Will and Testament of ‘Abdu’l-Bahá, Shoghi Effendi‘s station was designated as “the blessed and sacred bough that hath branched out from the Twin Holy Trees,” whose shade “shadoweth all mankind.”  At this time, the Greatest Holy Leaf administered the affairs of the Faith.  The Guardian was preparing to assume his position.  Known as Bahiyyih Khánum, she had been tempered by forty years of imprisonment, deprivation, and cruelty; the conditions were intended to destroy the exiled members of the Faith.  However, history stands testament to the contrary.  It was Martha’s plan to meet Her and the Holy Family.  To the Guardian, Martha appeared as a resplendent touch, lighting a world of shadows.

Martha Root arrived at Mount Carmel on March 13, 1925 along with Effie Baker and Corinne True.  She had become very close to the Master and communed often, even after his passing.  Thus, she did the same with Shoghi Effendi , her beloved Guardian.   They prayed together at the shrines and conferred on her teaching work.  The beauty and dignity of Bahiyyih Khánum touched Martha deeply.

The travels continued, on to the north, to Switzerland and in 1923, a visit with Queen Marie in Romania, one of Europe’s most noble members of royalty.  She visited the British Isles and gave lectures at the Edinburgh Esperanto congress in 1926.  Germany and the north countries were next, then Greece, Yugoslavia and Czechoslovakia.   Despite cautious words from Shoghi Effendi, Martha visited the Cradle of the Faith, Iran with an unsuccessful effort to meet the shah, Riza Khan Pahlavi.  On the November 25, 1929, Martha Root arrived for her second visit to Haifa and the Bahá’í holy shrines.  In 1930, she tried to visit His Imperial Majesty, Hirohito of Japan. However, the U. S. officials would not grant permission at first.  With perseverance, she was finally able to present gifts and Bahá’í writings.

It was 1936, the world was an ugly place, and World War II was devouring the spiritual essence of man.  Martha continued her relentless effort to infuse Europe with the teachings of Bahá’u’lláh.  Although the work went forward, the body was failing, and she knew that time was on the wing, the skylark returned home to the United States.

In 1937, Martha traveled once more to the Hawaiian Islands, to China and India; finally traveling to Austral-Asia to finish earlier work there.  In 1939, Martha returned to Hawaii and after a lengthy illness, on September 28, slipped into unconsciousness and moved from this world.  She had begun another journey.