At that time the available Baha'i literature was slight, and copies of prayers and tablets were typewritten and distributed from friend to friend. One of the earliest efforts to make the sacred texts more widely available was voluntarily initiated and sustained by Mr. Wilhelm. 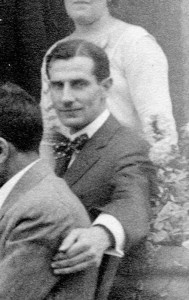 In the history of the Bahá’í Faith during the first half of the twentieth century, Roy C. Wilhelm occupied an important place. The firmness of his faith, the purity of his devotion, his self-sacrifice and his untiring activity enabled him to make a unique contribution to the establishment of the Faith in North America and indirectly, through his generous aid to Miss Martha Root, and his distribution of Bahá’í literature in many languages, to its spread in other continents. Essentially humble, he carried heavy administrative responsibilities with a winning charm which endeared him to a host of friends.

Roy Wilhelm was first and foremost a man of integrity who applied the high Bahá’í standards of conduct to himself before he applied them to others.

Born in Zanesville, Ohio, September 17,1875, Roy Wilhelm and his parents moved to West Englewood, New Jersey, and opened their import firm in New York City, which he actively conducted until the last few years of his life.

It was on this property in West Englewood that ‘Abdu’l-Bahá in 1912, during His North American visit, held a unity feast for the Bahá’ís of the New York metropolitan area at which He announced that on that date the Faith of Bahá’u’lláh was truly established in America. The site of that gathering will, in the future, mark the only public Memorial which the American Bahá’ís are permitted to construct in reverent observance of ”Abdu’l-Bahá’s visit from April to December, 1912.

From a Bahá’í who was also associated with a group which met in the Dodge home, New York City, for many years after 1900, has come this description:

“The meetings were intensely interesting and full of fervor. It was a happy group, and there was an apparent spiritual intelligence, one might say, even if our knowledge of the Teachings was limited. A baptism of the Holy Spirit must have been the pure bounty of the Lord to this group. Without exception every one had a great and sincere desire to serve the Cause in the way he or she seemed to be guided. Roy (Wilhelm) attended these meetings regularly . . .”

At that time the available Bahá’í literature was slight, and copies of prayers and tablets were typewritten and distributed from friend to friend. One of the earliest efforts to make the sacred texts more widely available was voluntarily initiated and sustained by Mr. Wilhelm. His compilations, successively translated into a number of languages, were widely used at fireside (home) and public meetings conducted more and more frequently as Bahá’í centers increased in number in North America. To this one devoted worker may be attributed the great service of printing and making readily available hundreds of thousands of Bahá’í pamphlets in the course of his lifetime. In addition, his business advertisements in trade journals became notable for the use of a brief Bahá’í text in each.

Much could be written about his visits to Bahá’í centers on his business trips throughout the country, carrying the great Message to countless inquirers and strengthening the ardor of the active Bahá’í workers themselves.

“The Bahá’ís everywhere looked forward to his coming, and prepared meetings for him . . .” one of his contemporaries has written.

The year 1907 marked the greatest experience in the formative years of his Bahá’í life. In April of that year Roy Wilhelm, accompanied by his mother, went on a pilgrimage to attain the presence of ”Abdu’l-Bahá at ‘Akka in the Holy Land. The words of welcome uttered by ”Abdu’l-Bahá, as translated into English, were written down by Mr. Wilhelm immediately afterward and quoted in a letter written to his fellow Bahá’í teacher, Mrs. Mariam Haney:

“Welcome! Very welcome! I have been waiting for your coming. It is with God’s help that you have reached ‘Akka . . . You represent all the American believers . . . Thank God that you came.”

The following year Roy Wilhelm prepared and distributed a booklet recounting his pilgrimage, which he entitled “Knock, and it shall be opened unto you. (Matt. 7:7) .” On the front cover was reproduced a photograph of the door leading to ‘Abdu’l-Baha’s room. Quoting from the text:

“That which most impresses the pilgrim to the ‘Most Great Prison’ at ‘Akka, is the spirit of sacrifice. Nowhere have I witnessed such love, such perfect harmony. The desire of those in that prison was to serve one another. In our Western liberty it is difficult to realize the bitter antagonism and hatred which exists in the East between the followers of the several great religious systems. For example, a Jew and a Muhammadan would refuse to sit at meat together: a Hindu to draw water from the well of either. Yet, in the house of  ”Abdu’l-Bahá we found Christians, Jews, Muhammadans, Zoroastrians, Hindus, blending together as children of the one God, living in perfect love and harmony …

“At the house of ”Abdu’l-Bahá, in ‘Akka, we met many of these peoples, but they had lost all trace of the discord and hatred which has been inbred and cultivated for centuries, and now they are as members of one Household. They sacrifice their lives for one another. To what shall we attribute this miracle of unity? . . . We had heard much of the love and kindness shown by the Oriental brothers to the pilgrims from the West-after our visit . . . we understood. . . In the meeting of the West with the East is fulfilled the prophecies of the Books . . . During our last meal ”Abdu’l-Bahá broke a quantity of bread into His bowl; then asking for the plates of the pilgrims He gave to each of us a portion. When the meal was finished, He said: ‘I have given you to eat from My bowl-now distribute My Bread among the people.’ “

The Bahá’í message of the oneness of mankind and the essential unity of Revelation brought its own severe tests to the followers in all countries, that the sincere might be separated from the insincere. The storm of bitter controversy raged around the calm and radiant Presence of ‘Abdu’l-Bahá, Center of Bahá’u’lláh’s Covenant to humanity. Victim of official persecution and confined to prison quarters until 1908, ‘Abdu’l-Bahá was also assailed by the unfaithful within His own family, and these enemies attempted to create the basis for general disloyalty within the Bahá’í communities of East and West. With other stalwart souls of his generation Roy Wilhelm stood above a frequently bewildering and subtle controversy and radiated the spirit of firmness in that Covenant.

He was very dear to ‘Abdu’l-Bahá and received many evidences of his Master’s trust and esteem. For a long period the cablegrams and letters (tablets) sent by ‘Abdu’l-Bahá to Bahá’í groups and individuals in North America were addressed in Roy Wilhelm’s care and forwarded by him to their destinations.

In 1909 the American Bahá’ís, under the initiative of the Chicago group, elected a national Bahá’í body to represent all the Bahá’ís of North America in their united effort to purchase land and plan the construction of the House of Worship recently completed in Wilmette, Illinois.

From that year until his retirement from active Bahá’í service in 1946, with the exception of a single year of illness, Roy Wilhelm was elected annually to the Bahá’í Temple Unity and to the later National Spiritual Assembly, and for years served as its treasurer. No other American believer has achieved a comparable record. As treasurer, the integrity of his character and the simple, direct humanness of his exposition of financial matters brought about a rapid development of the Bahá’í fund as an organic institution of the community.

After the passing of ‘Abdu’l-Bahá in 1921, the Guardian who was appointed in His Will and Testament summoned two American Bahá’ís for conference in Haifa -Roy Wilhelm and Mountfort Mills.

The Guardian’s cablegram lamenting the passing of Roy Wilhelm from this world on December 20, 1951, is cited at the beginning of this article. In conclusion it is appropriate to quote from letters addressed to him by ‘Abdu’l-Bahá. They illumine the essential worth of this man, and his service as a steadfast pillar of a new and world-wide Faith.

“Verily thou art serving in every respect; thou art striving more than thine energy permits, and thou art rendering self-sacrifice. I am pleased with thee to the utmost.”

“Verily thou art Bahá’í, thou art godly and heavenly. Thou art self-sacrificing in service to the Kingdom. Even a minute thou dost not neglect. Thy heart is overflowing with the love of God. Be thou assured that thou wilt receive great Confirmations!”

“The sight of your portrait brought joy to My heart, because it is luminous and celestial, and looking at the photograph of your house, I saw the charm of the spot, the beauty of its environment, and the perfection of its building.”

“I am extremely pleased with you because you are a true Bahá’í. Your house is My house; there is no difference whatsoever between yours and Mine.”   -HORACE HOLLEY