Having been brought up in a strict Lutheran household, she married a mining engineer named Thomas H. Collins and lived in Calumet, Michigan and later Bisbee Arizona. Thomas met great success in Bisbee by developing the porphyry copper mining operations that eventually become the Phelps-Dodge Mining Company. They moved to California during the 1920s where Millie, as she was affectionately known, became a Baha’i and made her first pilgrimage to Haifa in early 1923. 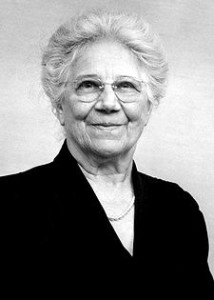 Amelia Engelder Collins was the seventh of 14 children of Catherine Groff and Conrad Engelder, a German emigrant and Lutheran clergyman. Amelia had nine brothers and four sisters.

Having been brought up in a strict Lutheran household, she married a mining engineer, Thomas H. Collins and lived in Calumet, Michigan and later moved to Bisbee Arizona. Thomas met great success in Bisbee by developing the porphyry copper mining operations that eventually become the Phelps-Dodge Mining Company. They moved to California during the 1920s where Millie, as she was affectionately known, became a Baha’i and made her first pilgrimage to Haifa in early 1923. Thomas Collins accompanied her and was shown great kindness by Shoghi Effendi. 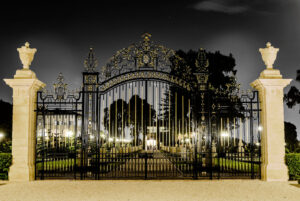 During a cruise to Iceland in 1924, Millie met Holmfridur Arnadottir and became good friends. Later, in 1939, she supported the publication of the first translation of Baha’i literature in Icelandic: Esslemont’s Bahá’u’lláh and the New Era. In 1924, Millie was elected to the National Spiritual Assembly of the United States and Canada. She was a member of this body until 1933. Then again in 1938, she was re-elected and served until the Guardian called her to service at the Bahá’i World Center. In addition, she served as a member of the National Teaching, Assembly Development, and Inter-America Committees. She visited with and assisted most of the Assemblies within the United States and Canada with their consolidation work and those of South and Central America in teaching work during the First and Second Seven Year Plans, 1937-1953. In 1937, The Guardian sent a sacred gift to the American Bahá’i Community through Millie. This was the lock of Baha’u’llah’s hair that had been preserved by the Greatest Holy Leaf, to be placed beneath the dome of the American Bahá’i Temple. She presented the gift during the 1938 National Bahá’i Convention mounted in a silver frame, the first of many sacred gifts from the guardian to become part of the National Bahá’i Archives.

Thomas Collins, although having never embraced the Faith, supported Millie’s Bahá’i activities. These included the financial contributions that maintained the solvency of the Geyserville School. In 1937, he unexpectedly died from a heart attack. The Guardian asked the Bahá’is at the Geyserville summer school to hold a befitting memorial service.

After arranging her substantial estate in order, one that would eventually establish the institutions of the Bahá’i World Center, Millie later that same year, made her second pilgrimage to the Holy Land.  The tie between the Guardian and she became significantly closer.  This included a friendship with the Guardian’s wife, Ruhíyyih Khánum. In a letter to her, shortly after this pilgrimage, the Guardian wrote:

“The days you spent under the shadow of the Holy Shrines will long be remembered with joy and gratitude.  I have during these days increasingly appreciated and admired the profound sense of devotion, the passionate fervor, the intense love and attachment that animates you in the service of the Holy Cause.  For such noble qualities I feel thankful, and I am certain that the fruits they will yield will be equally outstanding and memorable.  Rest assured and be happy.”

In 1945, Millie was invited by Miss Arnadottir to come to Iceland. In response, the Guardian replied through his secretary: “As he cabled you, he feels your presence in America more important than Iceland at this time… The Small Assemblies in America are badly in need of Bahá’i’ education…” He went on to say that Millie was one of those needed for this task and to travel to Iceland could jeopardize her health. Millie was the first to initiate the teaching of the American Indians in accordance to ‘Abdú’l-Bahá’s Tablets of the Divine Plan.

In 1948, the first Indian Bahá’i Assembly on the American continent was formed on the Omaha Indian Reservation at Macy, Nebraska.  Millie’s travels for the Faith at the request of Shoghi Effendi were extensive.  These included the arrangements, in 1942, for the design and erection of the memorial to May Maxwell, Ruhíyyih Khánum’s mother in Buenos Aires. She even located a block of Carrara marble with the right characteristics for the project.  Travel arrangements were nearly impossible because of the wartime conditions.  In 1946 and 1949, Millie made additional trips to Latin America to attend conferences and teaching work.

In 1947, Shoghi Effendi proclaimed that Millie Collins has been made his ninth Hand of the Cause of God. This singled her out as one who was uniquely loved and privileged by the Guardian.  Millie Collins traveled several times to Europe after the close of World War II.   In 1951, she traveled at the request of Shoghi Effendi to Turkey and Egypt. While in Cairo, despite becoming so ill that she could hardly stand, she gave an address to a large public meeting at the Hazíratu’l-Quds.  Her role seemed to be from this time on, to ignore illness and her increasingly crippling arthritis, going forward, putting her whole trust in God.

Although Millie lived very simply, she made generous contributions to the Faith. In 1944, she sent the Guardian a generous contribution that covered most of the cost of constructing the superstructure for the Shrine of the Báb on Mount Carmel.  Many of Millie’s services are only known to God. Contributions known to mankind included: purchase of property on Mount Carmel (1926); development and extension of the Geyserville School properties in northern California (1936); at Davison, Michigan, the first publication of Bahá’i literature in Amharic (1934); first contribution to the Bahíyyih Khánum Fund toward the erection of the Mother Temple of America (1939): Contribution to the Persian Temple Fund (1939); defrayed cost of publication of four volumes of The Bahá’i World; Additional contributions to the Mother Temple Works, gifts of property near the Temple and to the Temple Dependency Fund, and various teaching projects, donations toward the purchase of nineteen supplementary Temple sites in Latin-America, Europe and Asia; contributions to aid embellishment of the area surrounding the Tomb of Bahá’u’lláh at Bahji and erection and furnishing of the International Archives building on Mount Carmel; the donation of the entire sum for the purchase of the Temple site on Mount Carmel (1953).
In 1953, Shoghi Effendi acknowledged in his message to the twelve Annual Conventions, Millie’s “munificent donation” toward the purchase of many Hazíratu’l-Quds and endowments on five continents and in his last Convention message in 1957 for the donations for the building of the Mother Temples in Europe, Australia and Africa.   The Guardian named the main gate to the shrine of Bahá’u’lláh in her honor.

Shoghi Effendi appointed Millie Collins in January 1951 as the vice -president of the International Bahá’i Council and she went to live in Haifa.  This work continued for the rest of her life.  In 1953 as part of the ten-year World Crusade, she and Ruhíyyih Khánum represented the Guardian at the All-American Conference in Chicago.

The beloved Guardian passed away in November, 1957. Millie was planning to meet him in Haifa, and upon her arrival there, heard the calamitous news of his passing that put the entire Baha’i world into shock.  Millie immediately departed for London to join Ruhíyyih Khánum in her time of need. Millie became like a mother to her and gave spiritual support during the proceeding four dark years. In October, 1961, Millie had fallen and fractured her arm, requiring hospitalization.  Despite her frailness, she returned to Haifa to assist the Hands of the Cause in regard to the first election of the Universal House of Justice.  She had to be carried in a wheelchair to the meetings being held at Bahji, and was able to attend all but one.

On the afternoon of January 1, 1962, at the age of 91, Millie Collins passed onto the Abhá Kingdom while being held in the arms of Ruhíyyih Khánum. Her body is buried in the Bahá’i cemetery at the foot of Mt. Carmel.