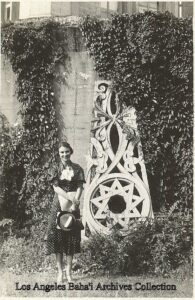 Marion Holley HofmanBorn: May 17, 1910Death: December 5, 1995Place of Birth: Visalia, CaliforniaLocation of Death: London, Great Britain
Burial Location: No cemetery details
To few indeed is given the rare honor of advancing the Cause of God so notably and directly. The Universal House of Justice calls on both “present” and “future” generations to “emulate” the “shining example” of her life. Yet to understand one of the truths of Marion’s life is to regard it in the light of a warning as well as an inspiration. The passing away of each individual is a timely warning to his fellows to prepare for the time when they, too, shall be called to divine account. To consider Marion’s life is thus to see to what great account a single life can be turned and to be inspired in turn to make the most of all opportunities and gifts. It is clear that Marion exerted enormous influence through her life by her “distinguished labours.” But it is well also to consider the influences that shaped her life, for it is in these spiritual connections that the radiance she came to embody was first enkindled.

Marion Elizabeth Holley was born in Visalia, California, on May 17, 1910, the eldest child of Harry and Grace Holley. The influences of her family life were auspicious; both her parents were college graduates, her mother being one of the first women to graduate from Stanford University. Grace received and accepted the Bahá’í Revelation through Isabella Brittingham, one of the first Bahá’ís in America. She later received a Tablet from ‘Abdu’l-Baha in which she was instructed to kiss each of her dear children on his behalf. Harry also became a Bahá’í.

Already at sixteen an active Bahá’í, Marion followed her mother to Stanford where she studied social sciences. Her studies countered the influence of her home; taken up with college life and immersed in her subject, Marion found herself drifting toward agnosticism and unsure of herself and her Faith. She excelled at debating and in sports; indeed, she was a member of the United States 1928 Olympic team, going to Amsterdam for the games. At eighteen she transferred to the University of California at Berkeley where she majored in anthropology, coming second highest in her class and returning to Stanford for her degree, graduating magna cum laude. She was artistic as well, singing and performing on the piano and organ.

Marion was approaching a critical juncture in her life. Her studies and social activities were flourishing, but though she served on the Spiritual Assembly of Visalia, she felt distanced from the Faith. Her mother, an active Bahá’í, had many visitors, among whom were the distinguished teachers Martha Root and Keith Ransom-Kehler. Keith exercised an especially potent influence on Marion at this time. She stayed with the Holley family for a month but never spoke of the Faith to Marion directly. She gave three talks a week, and Marion said that these talks “pulled me up by my bootstraps.” They gave her an intellectual appreciation of the Faith, which prompted her to make a formal declaration in Pasadena, California, in 1932. As one of the three Bahá’í youth in attendance, she represented the National Spiritual Assembly of the United States and Canada at the World Council of Youth that year. This council was intended as a “mental counterpart” to the Olympic Games then in session, so that for a second time Marion represented her country at an event of worldwide significance. 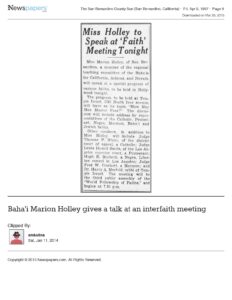 Marion was also writing. Her essays appeared in The Bahá’í World and World Order Magazine and revealed wide-ranging intelligence and penetrating analytical powers. She returned to the same theme time and again: “Religion must aid in and hasten the development of culture,” and “Philosophy and art ought to be cultivated in connection with the modern religion.” Keith Ransom-Kehler had brought her intellectually into the Faith, and Marion now wrote persuasively that all hope of restoring mankind’s powers lies primarily in the awakening of true spiritual dynamics. All the observations, knowledge, and training in which she had immersed herself at college were pressed into the service of a greater cause, a universal influence. She could pinpoint precisely the issues at the heart of modern man’s distress and describe the remedy frankly; her eloquent call still reverberates powerfully:

For by what right does any man walk abroad and call himself a citizen of the world, if he be not cognizant of its condition and enamored of its promise. Of this description, Marion was such a citizen.

To her intellectual appreciations were now, in 1934, added spiritual confirmations when she met May Maxwell, whom she considered her spiritual mother. Through May she became fully integrated, spiritually, mentally, and socially related in her inmost being to the three Central Figures of the Faith and polarized upon the Guardian, in whom she perceived the radiating power of the Covenant, a tie which became ever stronger as she advanced in spiritual maturity. 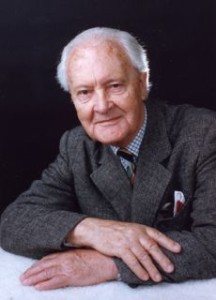 It was through May that she met her future husband, David Hofman, who had lived in Canada for eight years and was at this time touring the United States. David left California and went home to England, and the two kept in touch by correspondence, but not until nine years later were they able to marry. David sent a telegram to Marion inviting and urging her to come over and marry him. The telegraph office in San Francisco delighted her sense of humor with the telephoned greeting, “Good morning. This is cupid calling.”

The ten intervening years were marked for Marion by increasing levels of activity and energy, stimulated perhaps by the memory of that great soul Keith Ransom-Kehler, who died a martyr in Isfahan in 1933 and who had so positively influenced Marion at a crucial point in her life. By the time she and David were married in December 1945, Marion had acquired experience and distinction in her service to the Faith, as attested by a letter written on behalf of the Guardian to the National Spiritual Assembly of the British Isles:

In this connection [the Six Year Plan] he hopes you will use the services of Marion Hofman to the full. She is a gifted speaker and writer, and has had invaluable experience in America as a member of the National Teaching Committee during the Seven Year Plan. Both she and Mr. Hofman are wholly dedicated to the service of the Cause and eager to do all in their power to help accomplish the goals of your Six Year Plan.

In pursuit of these goals the Hofmans became two of the first nine pioneers to Northampton, Birmingham, and Oxford. Later, during the Ten Year Crusade, they pioneered to Cardiff and Watford. During this period Marion served as a member of the National Spiritual Assembly and the National Teaching Committee, and she was arn.ong the first Auxiliary Board members appointed by the Hand of the Cause George Townshend.

When David was elected to the Universal House ofJustice in 1963, Marion assumed full responsibility for the family publishing business of George Ronald in Oxford, whose books spread far and wide the Writings and Teachings of Bahá’u’lláh, the Rib, and ‘Abdu’l-Bahá, as well as continuing the work of the beloved Guardian in educating the believers. By this action and by organizing the household removal to Haifa, she enabled David to go there shortly after the election. Some time later Marion devolved her management of George Ronald to their son Mark and made teaching tours as far afield as North America, Australasia, India, Pakistan, and Europe. When David resigned from service on the Universal House of Justice, he and Marion returned to England, where she continued to work for the Cause she loved through the influence of her personal contacts. Only ill health impeded this service, and only death could have kept her from it.

The depth and scale of her accomplishments are great and awe-inspiring. But to understand the meaning of her life it is necessary to consider those individuals, pursuits, companions, and affections that permitted the gifts of this stalwart handmaiden of the Blessed Beauty to be laid at the Sacred Threshold.

The achievements of the life of Marion Holley Hofman are rooted in the influences radiating from the Revelation o f Bahá’u’lláh to which she dedicated her total loyalty. At this intimate level, as at all others, she is exemplary.

The Universal House of Justice summed it up in the cable it sent on the day of her passing December 5, 1995: