In addition to her book, Brittingham became an early traveling teacher for the Bahá’í Faith, making her perhaps the most prominent American Bahá’í woman in the 1900-12 period, and a prominent and highly respected American Bahá’í teacher. 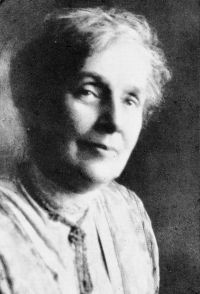 Isabella Matilda Davis Brittingham was born on February 21, 1852 in Pennsylvania. She was the daughter of Benjamin Davis, a farmer, lumberman, and teacher. He was in turn a grandson of a signer of the Declaration of Independence–John Morton–and was a staunch Presbyterian, serving as an elder of local Presbyterian churches for sixty years wherever he lived. Her mother was Elizabeth Nicholson Hamill, also of Pennsylvania Presbyterian descent. Brittingham was the youngest of seven children. On 10 November 1886 she married James Francis Brittingham (1855-1940), a devoted Episcopalian from Princess Anne, Maryland. He was a railroad employee, which resulted in frequent moves for the couple. They resided in Pocomoke, MD, until 1895; greater New York City until 1901; Johnstown, N.Y., until 1904; Seabright and Orange, N. J. until 1909. They never had children.

In the summer of 1897 James’s sister, Charlotte E. Dixon, heard of the Bahá’í Faith in Chicago and accepted it. She immediately wrote James about it, but in an indirect fashion, because she did not want his strong Episcopal beliefs to prejudice him against the new Faith. Isabella was much more receptive and when Ibrahim Kheiralla, who first brought the Bahá’í Faith to the United States, went to New York to teach his Bahá’í lessons there, starting in February 1898, both Brittinghams were members of his first class. They soon became active Bahá’ís and began to teach the Faith to the other members of Grace Episcopal Church in Union, New Jersey. The result was the conversion of several families and the establishment of the Bahá’í community of northern Hudson County, New Jersey. In late 1899 the “North Hudson” Bahá’ís, as they called themselves, organized themselves into a community; Edward Getsinger, who visited the community after his pilgrimage to Akka, appointed a Board of Counsel of five men, including James Brittingham. Even though Isabella was not a member of the Board, she was made its corresponding secretary. When the Brittinghams moved to Johnstown, New York, west of Albany, in late 1900 they started building a Bahá’í community there as well. In November 1900 Mírzá Asadu’lláh and Haji Hassan-i-Khurásání visited the Brittinghams there and deepened their knowledge of the Bahá’í Faith.

In September 1901 Isabella Brittingham went on pilgrimage, visiting ‘Abdu’l-Bahá for several days. The knowledge of the Faith she gained helped her complete a book, The Revelation of Bahá’u’lláh in a Sequence of Four Lessons, published by the Bahá’í Publishing Society of Chicago in 1902 and subsequently issued in at least nine editions through 1920. The lessons were Brittingham’s own expansion of the last four lessons Kheiralla taught, but with some important additions. Brittingham was a theological liberal; she praised new religious movements that Kheiralla condemned, indicated belief in the theory of evolution (which Kheiralla rejected), and accepted higher biblical criticism (which Kheiralla never understood). Much of the book is a compilation of biblical prophecies that Bahá’u’lláh and ‘Abdu’l-Bahá claimed to fill; it also offered the American Bahá’ís one of the first accurate summaries of the life of Bahá’u’lláh available in English.

In addition to her book, Brittingham became an early traveling teacher for the Bahá’í Faith, making her perhaps the most prominent American Bahá’í woman in the 1900-12 period, and a prominent and highly respected American Bahá’í teacher right up to her death in 1924. Many of her talks were preserved in typed form; they reveal a consistent focus on the spiritual growth of the individual, and a desire to combat misunderstanding of the Bahá’í teachings, such as psychic interpretations of spirituality. She was also in frequent communication with ‘Abdu’l-Bahá; the Bahá’í National Archives in Wilmette, Ill., contains about fifty-five tablets addressed to her. 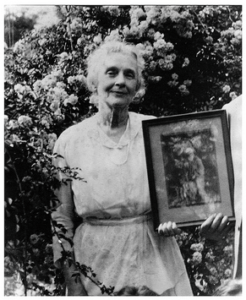 In 1905 Brittingham attended the first Nineteen-day Feast held in North America, sponsored by the New York City Bahá’í Board of Counsel. In early 1906 she traveled to every major Bahá’í community in the Midwest to promote the new institution of the Nineteen-day Feast; in early 1907 she traveled over eight thousand miles in four and a half months, visited twenty Bahá’í communities, and as she herself noted, “slept in over forty beds” in order to establish Feast on the Pacific coast and in the Mountain states.

In 1910 Brittingham began to correspond regularly with Bahá’í women in Iran, encouraging them to strive to become equal to Iranian men. Her indirect role in the development of the Iranian Bahá’í community has not previously been recognized. She played a major part in bringing into the Faith three of the four American Bahá’í women who settled in Tehran between 1909 and 1911: Dr. Susan Moody, who became a Bahá’í during Brittingham’s 1903 visit to Chicago; Brittingham’s sister’s daughter, Elizabeth Stewart; and Lillian Kappes, one of the former members of Grace Episcopal Church.

Throughout the ‘teens Brittingham traveled to teach the Faith, especially in the Pacific states and the Southwest. In Douglas, Arizona, she established an active Bahá’í community; there she brought back into the Bahá’í Faith Mrs. Nellie Stevison French, who had become disillusioned with it as a result of the moral conduct of Ibrahim Kheiralla. Mrs. French later became an important writer, editor, administrator, and teacher of the Faith. When Brittingham’s health began to decline she settled in Philadelphia, where the Revell family cared for her; in their home she died of a heart attack on January 28, 1924. Her husband remained an active Bahá’í in the New York City area until his death on July 24, 1940.