He became a Baha'i in 1921 and in 1926 he acted as the literary adviser to Shoghi Effendi, reading through and editing all of the Guardian's major publications. At Shoghi Effendi's request he wrote the introduction to The Dawn Breakers and God Passes By

George Townshend was born in Ireland and was a well known writer and clergyman. At the age of 31 he was ordained as an Episcopalian minister while he was living in the United States. [1] He married his wife Nancy, and had two children: a son Brian and a daughter Una.

He became a Bahá’í in 1921 and in 1926 he acted as the literary adviser to Shoghi Effendi, reading through and editing all of the Guardian’s major publications. At Shoghi Effendi’s request he wrote the introduction to The Dawn Breakers and God Passes By.[1]

He spent many years near Ballinasloe, County Galway, where he was incumbent of Ahascragh and Archdeacon of Clonfert. He later became the Canon of St. Patrick’s Cathedral in Dublin. However, at the age of 70, Townshend renounced his orders to the Anglican Church and wrote a pamphlet to all Christians under the title “The Old Churches and the New World Faith” proclaiming his allegiance to the Bahá’í Faith.[2]

He then moved to a small bungalow outside of Dublin where he spent his last decade. George was one of the founding members of the Dublin Local Spiritual Assembly and in 1951 was designated by Shoghi Effendi as a Hand of the Cause of God. [3]

The mightiest proof of a Prophet has ever been found in Himself and in the efficacy of His word. Bahá’u’lláh rekindled the fires of faith and happiness in the hearts of men. His knowledge was innate and spontaneous, not acquired in any school. None could gainsay or resist His wisdom and even His worst enemies admitted His greatness. All human perfections were embodied in Him. His strength was infinite. Trials and sufferings increased His firmness and power. As a divine physician He diagnosed the malady of the Age and prescribed the remedy. His teachings were universal and conferred illumination on all mankind. His power has been poured forth more abundantly since His death. In His presence He stood alone and events have proved and are still proving its accuracy. [4] 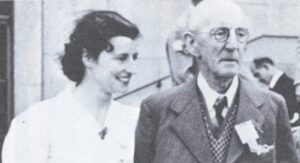 Una and Brian helped him to write Christ and Bahá’u’lláh by writing down his dictations as he was dying from Parkinson’s. [3]