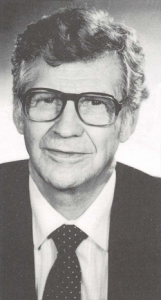 Angus Weldon Cowan was a Canadian Bahá’í who served on the National Spiritual Assembly, as an Auxiliary Board member, and as a Counselor.

Cowan was born in Quebec and attended primary school in Bishopton and West Bolton and high school in Knowlton. He then went to college at Macdonald College in St. Anne de Bellevue and after graduating worked as a life insurance salesman from 1938 to 1942.[1]

In 1942 he joined the Air Force and served as an air frame mechanic until 1946. After his discharge he attended the University of Toronto while working in a bookstore and he was introduced to the Faith when he met John Robarts, a bookstore customer, becoming his babysitter and he declared in 1949. After a few months of study at the University he was hired by IBM in Toronto. In 1950 he moved to Winnipeg where he managed IBM’s Electric Typewriter Division until 1955 and played hockey and baseball.[1] 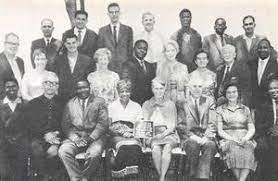 In December 1953 Cowan was elected to the National Spiritual Assembly of Canada in a by-election after John Robarts pioneered to Africa. In 1968 he was appointed as an Auxiliary Board member and assigned to Saskatchewan, Manitoba, North Dakota and Montana.[1] At a Conference in 1968 he volunteered to pioneer to Venezuela after hearing an appeal from Rúḥíyyih Khánum, however he was unable to follow through as he had not consulted his family. ​In October 1976 he was appointed as a Counselor for North America.[2]

In 1985 Cowan retired as Counselor as he was suffering from cancer and he received a letter from the Universal House of Justice noting his services were still extremely valuable.[3] At the last Bahá’í Conference he attended he spoke that he was thankful for the tests he had been given and felt he had only come to an understanding of what reliance on God meant through pain and suffering.[2]