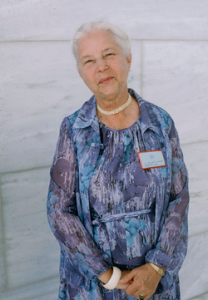 Margaret Peregrine Randall (Bahiyyih Randall Winckler), daughter of Harry and Ruth Randall, pioneered to South Africa in 1953 at the request of Shoghi Effendi, where she served on the National Spiritual Assembly of South and West Africa. In 1968 she was appointed to the first Continental Board of Counsellors, on which she served for seventeen years.

Her parents were Baháʼís and she met ‘Abdu’l-Bahá during His visit to America when He visited her mother who was ill. In 1912 she went on pilgrimage and ‘Abdu’l-Bahá gave her the name Bahiyyih.

In 1926 she was appointed to the National Youth Committee of the United States, and in 1928 she was elected to the Local Spiritual Assembly of Boston. In 1938 she married Harry Ford.

In 1952 Shoghi Effendi asked her to go to Europe and visit fifteen countries which had recently received Baháʼí pioneers. This trip took her four months during which she gave two lectures a day in various locations. The Guardian then asked her to pioneer to South Africa and she and her husband arrived in 1953. Bahiyyih was elected to a Local Spiritual Assembly and appointed secretary of the first National Teaching Committee of South Africa. Her husband passed away in Johannesburg in 1954.

In 1960 Bahiyyih was elected to the National Spiritual Assembly of South and West Africa, and she served on the body from 1960 to 1966. She was re-elected in 1967, and the following year she was appointed to the newly established Continental Board for Southern Africa. In 1973 Bahiyyih married Godfried Winckler. He passed away in Sabie in 1986. 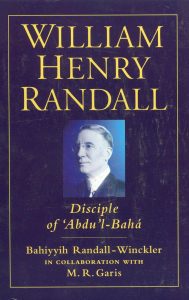 In 1996 Bahiyyih wrote a book about her beloved father titled, “William Hendry Randall: Disciple of ‘Abdu’l-Bahá”, her father lived a life who was transformed into one of extraordinary service and selfless devotion to the Bahá’í Faith.

Bahiyyih passed away in Sabie in 2000, and the Universal House of Justice directed that memorial services should be held throughout South Africa.