She became the first Baha'i to reside in Malta, earning her the title "Knight of Baha'u'llah" 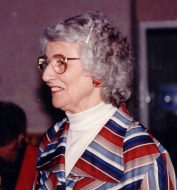 Mrs. Dean was the daughter of a distinguished Bahá’í, George Townshend, and his wife Nancy.

Shoghi Effendi, appointed Mr. Townshend a “Hand of the Cause of God” in 1951.

“Hand of the Cause” was a title given to 50 outstanding Bahá’ís whose chief duties were to protect and propagate the Bahá’í Faith.

Once a dignitary in the Church of Ireland, Mr. Townshend was the author of books, essays, poems and prayers on Bahá’í topics.

Born in Ireland, Una was the subject of an eloquent written meditation by her father describing her childhood happiness. It began: “O little one, my Una, April’s child, thou breath of spring wind embodied!” (See full text below.)

She in turn gave great happiness to her father when, in 1940, she became a Bahá’í, a process involving, as it does for all Bahá’ís, the independent investigation of the Faith: “My heart just bursts into pieces with happiness and gratitude when I think of her,” Mr. Townshend wrote.

Una, who had attended a leading women’s college in Cheltenham, England, spent the early years of World War II with her family, and was active in Bahá’í life in Ireland. She later served in the British armed forces in Italy.

In 1946 Una became the first Bahá’í to settle in Dublin, a city where the vast majority of residents were devoutly Catholic. This posed great challenges for a single woman seeking to find those who might be interested in hearing about her religion.

Furthermore it involved her leaving her mother who wanted her at home as “an extra pair of hands” and to help with the family budget.

Shortly before his own death, George Townshend’s biographer, Mr. David Hofman, fondly recalled Una Dean: “She was a beautiful Irish girl — full of fun, devoted to her father and a very active Bahá’í.”

In October 1953, she became the first Bahá’í to reside in Malta, earning her the title “Knight of Bahá’u’lláh”, an accolade first given by Shoghi Effendi to those who took the Faith to countries where there were no Bahá’ís.

In a letter to her father, Shoghi Effendi wrote:

“The work so splendidly initiated by your dear daughter is unique, historic and of vital importance. I admire her courage, zeal, devotion and perseverance. I will pray for her success from the depths of my heart.”

After Una’s death this year, Mr. Hofman provided an historical context in which to view the sacrifice she made by responding to Shoghi Effendi’s call and going to Malta:

“Malta was savagely destroyed in the war and by 1953 it offered no savory reputation to invite a young single woman of 33, delicately brought up and resident (nearly) all her life in Ireland.”

Moreover, as in Dublin, to proclaim a new Faith in a staunchly Catholic society required a deep well of steadfastness because progress was very slow — indeed, it was not until 1973 that the first Local Spiritual Assembly of the Bahá’ís of Malta was formed.

In 1954, with her distinguished father suffering from Parkinson’s disease, and on the instructions of Shoghi Effendi, Una returned home to help with the housework and also to assist her father with what Shoghi Effendi was to call his “crowning achievement” — writing the book “Christ and Bahá’u’lláh”. Una with her brother Brian, who died in 1988, attended to correspondence and put their father’s thoughts on paper.

After her father’s death in March 1957 and Shoghi Effendi’s passing in November that year (Una attended the funeral in London), she went to live in Canada. On a trip to Seattle she met and later married Bahá’í, Richard (Dick) Dean, a former member of the Harlem Globe Trotters basketball team. They settled in Edmonton. Mr. Dean died in 1990.

Una served on the Local Spiritual Assembly of Edmonton until 1987.

In an eloquent eulogy, Douglas Raynor quoted Felicity Enayat, a Bahá’í, who remembered Una preparing studies on messages of the Universal House of Justice.

“She showed me the importance of taking the time to ponder the words of the Universal House of Justice,” Ms. Enayat wrote.

“Her qualities of humility and generosity, her loyalty, her gentleness, her contentment with the will of God and her total consecration are unforgettable.”

In 1992 Una Dean went to the Bahá’í World Centre in Haifa, Israel to attend a gathering of the Knights of Bahá’u’lláh.

The Deans’ daughter Farah, who survives them, had a severe mental disability. The Deans were among the founding members of the Alberta Association of Families in Action for the Dependent Handicapped.

Mrs. Dean died in Edmonton. Irish music was played at her funeral there, and messages from the National Spiritual Assemblies of Ireland and Malta were read.

In a message to the National Spiritual Assembly of the Bahá’ís of Canada, the Universal House of Justice, wrote of her “exemplary courage” in taking the Message of Bahá’u’lláh to the people of Malta.

“Her service to the Faith was characterized by devotion and steadfastness,” the tribute said.

“We remember with gratitude the loving assistance she rendered to her illustrious father, the Hand of the Cause of God, George Townshend, in particular with the completion of his influential work, ‘Christ and Bahá’u’lláh’.” 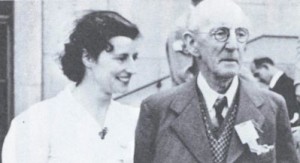 The Universal House of Justice advised the National Spiritual Assembly of the Bahá’ís of the Republic of Ireland is to hold a befitting memorial service to celebrate the life and services of “this distinguished member” of their community. (Report compiled with the assistance of Mr. David Hofman, Mrs. Olive McKinley and Mr. Doug Raynor).

“O little one, my Una, April’s child, thou breath of the spring wind embodied!

“The bluebells cluster about thy knees; overhead the giant beech trees spread their half-unfolded leaves; across the meadows the cuckoo calls, and from the distant bog comes the curlew’s lonely cry.

“How happy art thou, leading the revel of the woods, their native queen, for whom a thousand springs have come and gone to weave thy flower-beauty, and to find their meaning and perfection in these fresh lips and laughing eyes of thine.

“O little one, joys more rare than these await thy wakening heart! A richer spring has cast its bounty at thy feet, a greater glory shines from another Heaven. And never morning breaks nor evening falls but lovers’ prayers go forth to beg the early vision of God’s Golden Age for thee who playest here thinking all happiness is already thine!”

Source:
Bahá’í World News Service. news.bahai.org
(Reproduced from “The Mission of Bahá’u’lláh”, by George Townshend, with the kind permission of George Ronald, Publishers.)