Ethel Rosenberg was the first English person to accept the Bahá'í Faith in 1899. She spent her early childhood there and came to London to study art under Legros at the Slade School. The book, 'Abdu'l-Bahá in London, was the first fruit of this activity. When she went to Haifa for her third pilgrimage, in 1921, she arrived to find that the Master had recently passed away. Shoghi Effendi gave her instructions for the calling of the first National Spiritual Assembly of England. She herself served on this body from 1923 through 1926. 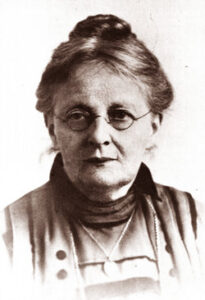 Ethel Rosenberg was the first English person to accept the Bahá’í Faith in 1899. She spent her early childhood there and came to London to study art under Legros at the Slade School.

Ethel was ‘Abdu’l-Bahá‘s social secretary when He was in London. She lived at the time in White Lodge, 8, Sunnyside, Wimbledon. ‘Abdu’l-Bahá asked her, among others, to give consideration to publishing Bahá’í books. The book, ‘Abdu’l-Bahá in London, was the first fruit of this activity. When she went to Haifa for her third pilgrimage, in 1921, she arrived to find that the Master had recently passed away. Shoghi Effendi gave her instructions for the calling of the first National Spiritual Assembly of England. She herself served on this body from 1923 through 1926. 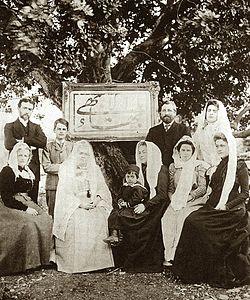 Known and loved by all the members of the Holy family in Haifa and Akka where she had visited for months at a time in the earlier stages of the outpouring of the Baha’i spirit from the East to Europe and America (January 1901 and 1905-6), Miss Rosenberg played no small part in the adaptation of the Baha’i Message to the western mind. Ever modest and unassuming the full value of her work in this capacity seldom appeared on the surface but those who knew her well and were in close touch with her activities were and are well aware of the great assistance she gave to the Master and how valuable was the help she rendered in the translation and transcribing of some of the outstanding works through which the truths of the Baha’i Message were made known to the peoples of the western hemisphere.

She spent a certain amount of time studying Persian but other interests prevented her mastering the language. She spent considerable periods of time in Paris working for the Movement. She went to Haifa several timcs, at least three, and to America three times, spending many months there. She went to America with Mirza Abu’l-Fadl and stayed with Mrs. Phoebe Hearst. In the first days of the Cause in Great Britain she interested many people; some of the most important members of the Movement came to her for her valuable advice and her assistance in English, as she herself had a very easy and pleasant style. She did a great deal of speaking in the early days and addressed large audiences. She did some writing, also, about the Cause. She was of great assistance to all of the young Persians and had a very extensive correspondence in the East. She was for many years one of the most, if not the most, active workers of the pioneers of the Movement in England. 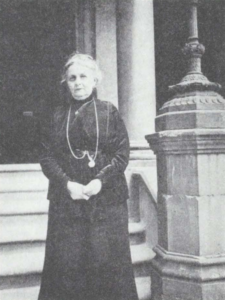 The outstanding point in her life in connection with the Baha’i Cause, was her intimate, personal knowledge of the Teachings. These she heard direct from the Master’s lips on her several lengthy stays in Haifa. She often read from her personal notes at the Baha’i meetings. She gave life-long devoted service to the Baha’i Cause in the British Isles.

She had profound knowledge of the Bible and also of other sacred books. Also a great knowledge of general literature. Her English was very good and her French nearly perfect. Her great work was in correcting and editing the writings and translations. 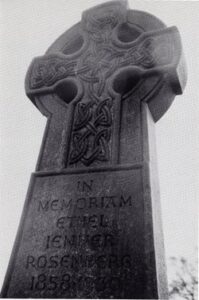 No one is more fully cognizant of the worth of this servant’s labours for the Cause of Baha’u’llah, as developed and expounded by she Center of the Covenant, than the beloved Guardian of the Cause, Shoghi Effendi, who, when he was advised of her passing cabled forthwith to the friends in London a heartfelt message of condolence and appreciation.

The following is an authorized translation of an unpublished Tablet of ‘Abdu’l-Baha to Ethel Rosenberg in 1906 in reply to her questions about the Tablet of Wisdom.

O thou dear handmaid of God!

Thy letter dated 6 April 1906 hath been received. Thou hast written that Mrs______ hath regained her health. God be praised, this daughter of the Kingdom hath attained unto spiritual health. A disaster to the body, when spiritual health is present, is of no importance. That is the main thing. God be thanked, she hath attained that great bestowal; she hath taken on immortal life.

It is to be regretted, however, that her husband is still wrapped in the veils of his idle imaginings. If her dear daughter _______be trained according to the instructions of God, she will grow to be a peerless plant in the garden of the heart. It is incumbent upon the father to choose for his daughter the glory that dieth not. Nevertheless, this is up to him; he may educate her in any way he desireth. As to what thou didst ask regarding the history of the philosophers: history, prior to Alexander of Greece, is extremely confused, for it is a fact that only after Alexander did history become an orderly and systematized discipline. One cannot, for this reason, rely upon traditions and reported historical events that have come down from before the days of Alexander. This is a matter thoroughly established, in the view of all authoritative historians. How many a historical account was taken as fact in the eighteenth century, yet the opposite was proven true in the nineteenth. No reliance, then, can be placed upon the traditions and reports of historians which antedate Alexander, not even with regard to ascertaining the lifetimes of leading individuals.

Wherefore ye should not be surprised that the Tablet of Wisdom is in conflict with the historical accounts. It behoveth one to reflect a while on the great diversity of opinion among historians, and their contradictory accounts; for the historians of East and West are much at odds, and the Tablet of Wisdom was written in accordance with certain histories of the East.

Furthermore, the torah, held to be the most ancient of histories, existeth today in three separate versions: the Hebrew, considered authentic by the Jews and the Protestant clergy; the Greek Septuagint, which was used as authoritative in the Greek and other eastern churches; and the Samaritan Torah, the standard authority for that people. These three versions differ greatly, one from another, even with regard to the lifetimes of the celebrated figures.

In the Hebrew Torah, it is recorded that from Noah’s flood until the birth of Abraham there was an interval of two hundred and ninety-two years. In the Greek, that time span is given as one thousand and seventy-two years, while the Samaritan, the recorded span is nine hundred and forty-two years. Refer to the commentary by Henry Westcott [the transliteration of this name is not certain] for tables are supplied therein which show the discrepancies among the three Torahs as to the birthdate of a number of the descendants of Shem, and thou wilt see how greatly the versions differ from one another.

Moreover, according to the text of the Hebrew Torah, from the creation of Adam until Noah’s flood the elapsed time is recorded as one thousand six hundred and fifty-six years, while in the Greek Torah the interval is given as two thousand two hundred and sixty-two years, and in the Samaritan text, the same period is said to have lasted one thousand three hundred and seven years.

Reflect now over the discrepancies among these three Torahs. The case is indeed surprising. The Jews and Protestants belittle the Greek Torah, while to the Greeks the Hebrew version is spurious, and the Samaritans deny both the Hebrew and the Greek versions.

Our purpose is to show that even in Scriptural history, the most outstanding of all histories, there are contradictions as to the time when the great ones lived, let alone as to the dates related to others. And furthermore, learned societies in europe are continually revising the existing records, both of East and West. In spite of this, how can the confused accounts of peoples dating from before Alexander be compared with the Holy Text of God? If any scholar expresses astonishment, let him be surprised at the discrepancies in Scriptural history.

Nevertheless, Holy Writ is authoritative, and with it no history of the world can compare, for experience hath shown that after investigation of the facts and a thorough study of ancient records and corroborative evidence, all establish the validity of God’s universal Manifestation; once His claim proveth true, then whatsoever He may choose to say is right and correct.

The histories prior to Alexander, which were based on oral accounts current among the people, were put together later on. There are great discrepancies among them, and certainly they can never hold their own against the Holy Writ. It is an accepted fact among historians themselves that prior to this time history was transmitted by word of mouth. Note how extremely confused was the history of Greece, so much so that to this day there is no agreement on the dates related to the life of Homer, Greece’s far-famed poet. Some even maintain that Homer never existed at all, and that the name is a fabrication.

It is my hope that through the favour and grace of the Abha Beauty, thou wilt fully recover thy health, and engage in serving the Cause with all thy might. I am aware that thou art much afflicted, and in extreme distress; but if we taste a drop from affliction’s cup, the Blessed Beauty drank down a sea of anguish, and once we call this to mind, then every hardship turneth into peaceful rest, and toil into merciful bliss. Then will a draught of agony be but a refreshing wine, and the tyrant’s wound only a friend’s most gentle balm.

Greetings be unto thee, and praise.[2]