When the prison authorities brought the Baha'i prisoners together in February, Tahirih saw her husband for the first time since their arrest. He had been so badly beaten that she could barely recognize him. 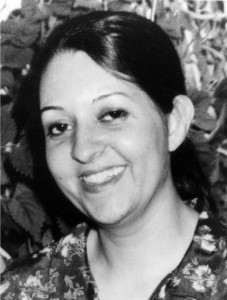 Tahirih Siyavushi, 32, also served on the Local Spiritual Assembly in Shiraz. She was a nurse and had memorized Bahá’u’lláh’s Most Holy book, the Kitab-i-Aqdas, which is the book of laws of the Bahá’í Faith. Both she and her husband, Jamshid, were arrested and subsequently martyred. Tahirih was a nurse and was used by prison authorities to care for other prisoners.

When the prison authorities brought the Bahá’í prisoners together in February, Tahirih saw her husband for the first time since their arrest. He had been so badly beaten that she could barely recognize him. She could not sleep that night. The prison authorities did not believe he would last the night and the guards felt so sorry for him that they asked Tahirih to take him some fruit. But he was unable to eat it. He recovered, somewhat, only to be hanged two days before her. When Tahirih knew that she would also be executed, she told her family that she was relieved and happy. When she saw her father for the last time, she said, “Look at how beautiful I am. Look at me well.” She was laughing.