"Lua in Persian means 'Flag', and you must be my flag and wave it in the East and in the West!" ‘Abdu’l-Bahá said to Lua Getsinger when she visited Him as a prisoner of ‘Akká, a member of the very first pilgrimage from America in 1898. 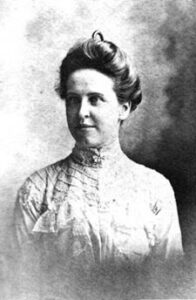 Lua was raised along with her 9 siblings in a small town in New York called Hume. She was excited with the conversations related to the imminent return of Christ. So her interest for religion was profound and later attended school in Chicago and there was a class on the Bahá’í Faith where she met fellow-student Edward Getsinger (whom she later married).

Upon returning home from school she received an invitation from Phoebe Hearst in 1898. Lua expressed to Phoebe how much she would love to meet the Master (referring to ‘Abdu’l-Bahá who is the son of (Ghusnu’lláhu’l-Athar), the founder of the Bahá’í faith). Phoebe arranged for this meeting to take place in Egypt in the Fall of 1898.

Lua and her husband Dr. Getsinger were the first North American Bahá’í’s to visit ‘Abdu’l-Bahá. In Lua’s own words (from a letter she wrote to Thornton Chase):

“…When I left America I thought I knew a good deal… but after seeing the Master… I am sure I know nothing… The Face of the Master is gloriously beautiful-His eyes read one’s very soul-still they are full of divine love and fairly melt one’s heart!”

‘Abdu’l-Bahá allowed the Getsinger’s to remain in Akká (Israel) for five months to learn Persian and acquire a deeper knowledge of the Faith. Lua returned to the U.S. with her husband in May 1899 and brought several gifts to give to the Friends. The gifts consisted of:

“Lua in Persian means ‘Flag’, and you must be my flag and wave it in the East and in the West!” ‘Abdu’l-Bahá said to Lua Getsinger when she visited Him as a prisoner of ‘Akká, a member of the very first pilgrimage from America in 1898. 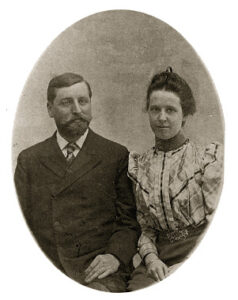 Stepping up to the lovely young woman standing beside Dr. Edward Getsinger, ‘Abdu’l-Bahá, seeing with His spiritual vision her capacity to become one of the great teachers of the Faith of Bahá’u’lláh, put something into her mouth, saying,

“I have given you the power to speak and loosened your tongue!”

Lua made several more trips to Akká throughout her life, including a stay of one-year to teach English. She was given the title ‘Herald of the Covenant’ and ‘Mother Teacher of the West’ by Abdu’l-Baha. Later, in 1914 the Master instructed Lua to proceed to India to acquaint the Maharajah of Jalowar with the Bahá’í teachings.

Lua died unexpectedly of heart failure on May 2, 1916. Before the doctor arrived she uttered three times “Ya-Baha-ul-Abha’.