"I believe with all my heart that He is the Master, and my greatest blessing in this world is that I have been privileged to be in His presence.” 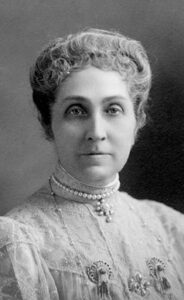 Phoebe Elizabeth Apperson Hearst at the age of 19, married George Hearst, who later became a U.S. Senator.  She was a major benefactor of UC Berkeley and its first woman Regent, serving on the board from 1897 through 1919.[1]

After the passing of her husband, Phoebe Hearst found herself in control of a vast fortune, which she dedicated to community services. During one of her stays at her home in California, she met with Lua Getsinger who taught her about the Bahá’í Faith.In 1898, she converted to the Bahá’í Faith and helped play a key role in spreading the religion in the U.S.

Because of the importance of her family in the US political sphere and the fact that ‘Abdu’l-Bahá was a prisoner and His movements were under close surveillance, it was dangerous for her to openly visit the Master and also for her involvement with the Faith to be known, so she traveled from Haifa to ‘Akká “under the cover of darkness”. Her pilgrimage only lasted for three days, and in spite of the shortness of her visit, it was a transforming experience. She described those days as “the most memorable days of my life…I believe with all my heart that He is the Master, and my greatest blessing in this world is that I have been privileged to be in His presence.” She also received from the Master the title  “Mother of the Faithful”. She was blessed by being able to see the Master again during His travels in California and was also honored by His visit to her Hacienda, where He chanted a prayer per her request.

After Mrs. Hearst’s passing on April 1919 the Master wrote that: “Although at present [it] is not known, yet in the future her name shall be uplifted and her fame shall spread abroad”. When Shoghi Effendi transformed the Mansion of Bahjí into a museum “showcasing the achievement of the Bahá’í Faith” he placed in a room overlooking the Shrine of Bahá’u’lláh the portrait of Phoebe Hearst, “the ‘Mother of the Faithful’, the one who made possible the flourishing of the Cause of God in the West”.[2]

In 1901, Phoebe Hearst founded the University of California Lowie Museum of Anthropology, renamed Phoebe A. Hearst Museum of Anthropology in 1992, in celebration of the museum’s ninth decade. The original collection was founded with about 230,000 objects representing cultures and civilizations throughout history.