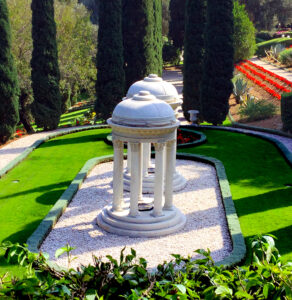 Ásíyih Khánum was born Ásíyih Yalrúdí the only daughter of Mírzá Ismá’íl Yalrúdí, who was a minister in court of the Sháh of Persia, highly influential and wealthy. She had one brother Mírzá Mahmúd who did not become a Bábí or a Bahá’í.

She was born probably in Yalrúd, a village in Núr district of Northern Iran. She was only 15 years old when she became the wife of her Lord in October 1835. She was called Navvabih as it was customary to call all girls descendent of the Vizier families by that name. From her early age she was extraordinarily intelligent, tall, slender, graceful with dark blue eyes. She was also entitled mother of Consolation as her Husband was called the Father of the poor.

The value of her dowry was large enough to be a subject of conversation in town for a long time! It is recorded that a resident jeweler was called to make jewelry for the bride during six months!

‘Abdu’l-Bahá, in a tablet addressed to a believer in the United States, confirms that the name of His mother was Ásíyih, which was also the name of Pharaoh’s daughter who adopted Moses. She received the rudimentary education of reading and writing. A sample of her handwriting can be seen in the Archives. The relationship between her family and that of Bahá’u’lláh strengthened when Ásíyih Khánum’s brother got married to the latter’s sister Sárih Khánum. The two girls loved each other so much that Sárih Khánum asked Ásíyih Khánum’s hand for her brother Bahá’u’lláh who was 18 then.

Ásíyih Khánum’s three survived children are ‘Abdu’l-Bahá, Bahá’iyyih Khánum and Mirzá Mehdi. In the first decade of her married life she bore two sons (Kazim & Mihdi) who were two years apart and died in infancy. The first 15 years of Ásíyih Khánum’s life was passed in relative comfort and luxury.

Following the persecution of the Bábi Communty in Iran, her happy life was short lived and the family lost all their possessions but she never complained; she considered the affliction a benediction from the Almighty.

Mirzá Buzurg’s (Bahá’u’lláh’s fater) fortune suffered tremendously during the last years of his life. He passed away in 1840 in Karbilá. Bahá’u’lláh, his wife and His mother as well as the rest of the large family moved with Him to the House at Shemirán Gate in Tihrán. All the surviving children of Ásíyih Khánum were born there. Since the declaration of the Báb this house became the focal point of activities for the Bábi believers and Ásíyih Khánum had to adjust with the vicissitudes of their lives. She became naturally in close contact with early women believers of the Faith such as Táhirih and was closely involved with the visitors’ well-being as Nabil tells us; she even healed Nabil’s eyes with an ointment she prepared herself!

Ásíyih Khánum’s third son, Áli-Muhammad, was born in 1845. He was 18 months younger than ‘Abdu’l-Bahá. He passed away just when he was seven years old in early 1852.

Whenever Bahá’u’lláh was absent from Tihrán, Ásíyih Khánum and their children would go to Tákur or Yalrúd to spend time with the family.

Following Bahá’u’lláh’s confinement in August 1852, His house was looted and sadly, Ásíyih Khánum became destitute. She immediately managed to find a house in an old quarter of the city to protect her children and the younger members of the family. The livelihood was non-existent and the children were so hungry that she decided to send ‘Abdu’l-Bahá, who was barely nine years old, to go to the other part of the city asking help from his aunt. The aunt could only give ‘Abdu’l-Bahá five coppers!

On January 12, 1853 Bahá’u’lláh was banished to Iráq. No need to say how difficult the long journey must have been for Ásíyih Khánum who had no travelling experience and never have lived a harsh life. Nobody came to say farewell to them except her grandmother.

During their journey from Tihrán to Baghdád, wherever they could stop, Ásíyih Khánum would take the children for a bath and wash their clothes in the bath water at the same time. Then she would carry the wet clothes in her arms and dry them on the side of her mule-litter as she was travelling. Her health deteriorated during this trip as well as in Baghdád where they were housed in a small dwelling.  Not only did Ásíyih Khánum have to carry her own household’s chores but that of Mirzá Yahyá! Bahá’u’lláh helped her as much as He could, nonetheless the ordeal got to its climax when Bahá’u’lláh decided to go to Sulaymániyyih.

Ásíyih Khánum was pregnant just as they left Iran on their way to exile and six weeks after their arrival the baby boy was born in Baghdad. He passed away while Bahá’u’lláh was in Sulaymániyyih.

She suffered tremendously during Bahá’u’lláh’s absence especially by Mirzá Yahya and his family’s unreasonable demands. Just before Bahá’u’lláh’s departure, ‘Abdu’l-Bahá, only ten years old, threw himself at His father’s feet and spontaneously implored the privilege of laying down His life for His sake.

On March 19, 1856, she was reunited with her Lord once again. Bahá’u’lláh returned from Sulaymániyyih and with His family moved to a small house on the west bank in the Karkh district of Baghdád. The house was entitled later as “Bayt-i-Á’azam”, the Most Great House. This house was always full of visitors from far and wide and Ásíyih Khánum’s life was busy by taking care of visitors and family alike.

During this period Mirzá Mihdi (The Purest Brunch) accompanied by Fátimih Khánum (second wife of Bahá’u’lláh) joined them in Baghdád.

On April 22, 1863, before leaving Baghdád, Bahá’u’lláh stayed in the garden of Najíbíyyih (Ridván) for 12 days. Ásíyih Khánum and other members of the family stayed behind to prepare for their trip and did not immediately join the companions. The flooding on the river Tigris prevented their crossing for eight days (April 29, 1863).

After four months in Constantinople, they were banished once again to Adrianople. Not being adequately clothed, they suffered tremendously during the 12 days’ journey in the dreadful cold winter. They moved from house to house in Adrianople for several months and finally they were settled in a suitable dwelling in the Murádiyyih quarter of the city. Following Bahá’u’lláh’s illness caused by poisoning, the effect of which remained with Him to the end of His life, He decided to separate house with His brother.  This came as good news to Ásíyih Khánum who was in constant fear for the life of her Beloved husband.

After five years in Adrianople, on August 12, 1868, they moved to Akká, the final stage of their exile. In the prison city, all the family members were ill. Bahá’iyyih khánum, not being able to bear the foul-smelling air in the Barracks, fainted upon arrival. Even ‘Abdu’l-Bahá who took care of everybody became ill. The hardship started to show its effect on Ásíyih Khánum. Her only joy was that she was close to her Husband and her children who at that time were in their twenties. It did not last long because of Mirzá Mihdi’s untimely accidental death in the prison, on June 23, 1870. Nabil narrates of Ásíyih Khánum’s unqualified acceptance of Bahá’u’lláh’s decisive decree to offer His son up for the quickening of humankind and its unification. She prostrated herself on the Threshold of His Grandeur and said: “My Lord, I entreat Thee to accept from me this ransom.” The Blessed Beauty conferred His bountiful favours upon her and advised her to be patient. Her response was: “Whatever is Thy good-pleasure that indeed is my heart’s desire and my best beloved…” She was not allowed to take part in her son’s funeral due to the restrictions in the prison. After this awful accident, she became ill and her health became a concern for the family. Soon after this incident the harsh confinement conditions relaxed and the family moved from the Barracks to the House of ‘Abúd. 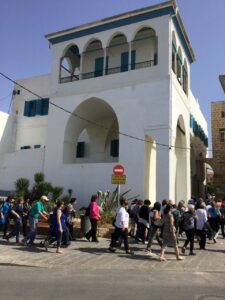 Abdu’l-Bahá married in the house of ‘Abúd.  Ásíyih Khánum with her daughter did all the necessary arrangements for the celebration. As the situation got more favorable in Akká, Bahá’u’lláh permitted the family members as well as some Bahá’ís to get settled in Akká and Haïfa.

Early June 1877, Bahá’u’lláh moved to Mazra’ih and then to Bahji but Ásíyih Khánum and the Greatest Holy Leaf stayed in the House of ‘Abúd due to restrictions imposed upon women travelling. Nevertheless, Bahá’u’lláh visited them regularly and stayed with them for a long period of time.  The women believers were regularly around Ásíyih Khánum, nevertheless she went through a stressful period in her life when ‘Abdu’l-Bahá travelled to Bahji for the first time in 1878. Ásíyih Khánum has never been separated from her son for an extensive period before. Correspondences preserved in the Archives from the time that the Master was in Bahji in which He addressed his mother as (her highness, the mother) and Ásíyih Khánum addressing her son as (Beloved Master).

In the latter years of her life she lived close to Bahá’u’lláh and a great number of correspondences between them confirms their close relationship. She had high hopes to meet with the wife of the Báb before she left this world which unfortunately it never took place. Both ladies were the same age!

During the last year of her life, she suffered poor health although it is not clear what the nature of her illness was. According to one of Bahá’u’lláh’s tablets, she might have had gastric disorder, which weakened her condition tremendously. Another account from Siyyid Ásad’ulláh Qúmi who had a shoe-repair shop in Akká tells us that Ásíyih Khánum slipped and fell down. Several days after the incident she passed away in 1886. Bahá’u’lláh as well as her children were at her bedside in her room in the House of ‘Abúd when she passed away.  The funeral of Ásíyih Khánum unlike her son’s, was carried out with great dignity as it was her station. Báha’u’lláh revealed a tablet of visitation after her death and refers to it as the second sorrowful event – the first being the passing of Khadíjih Bagum (the wife of the Báb) four years earlier – besetting the people of Bahá.