After the Japanese attack on Pearl Harbor and their invasion of Malaysia, Augusta and her husband were taken prisoners in Singapore, separated, and sent to prisoner of war camps for the duration of the conflict [Augusta was in the Stanley Camp in Hong Kong]. 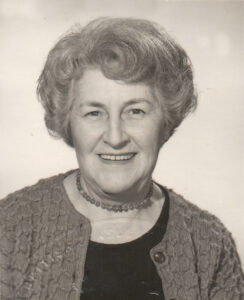 Augusta Florence Gertrude Annie Elwood was born July 21, 1900 in London, England. On June 25, 1927 Augusta married Robert Martin Wexham at the Parish Church of St. Paul Herne Hill in the County of London. She was predeceased by her husband, a warrant supply officer in the British Royal Navy. Robert M. Wexham was on a troopship, the S.S. Tamar, which was scuttled off Hong Kong in December 1941. He and Augusta had a daughter, Jane, in 1937, her death being registered in the same year, and a son, age unknown when he disappeared with his father in 1942. The Wexhams were stationed in Malta and Hong Kong, and Robert is listed as having died “on or since October 2, 1942” after disappearing as a prisoner of war. His official death certificate is dated November 9, 1945. On March 24, 1946 Augusta entered the United States at New York [papers of Augusta Wexham].

According to Lisa Janti, who knew Augusta in Beverly Hills, their young son was with Augusta and her husband at the time they were taken prisoners of war; he met the same fate as his father, and she never saw either of them again once they were separated in 1942. Lisa also recalls that Augusta possibly learned of the Bahá’í Faith while in the internment camp, which prompted her to contact Bahá’ís in Los Angeles. Lisa’s very first fireside was in the humble upstairs home up a flight of “rickety stairs” where Augusta lived in 1956 and which she says was “packed with people of diverse backgrounds” and so unusual in its simplicity and modesty in comparison to many homes in Beverly Hills. Maury Willows was the speaker at that fireside.

Augusta Wexham was a prisoner of war in the Stanley Camp in Hong Kong during Japanese occupation from 1942 until her release in 1945. Her original birth certificate was lost during her imprisonment.

Augusta enrolled in the Faith in the United States on July 16, 1951 through the firesides held by Maury and Lois Willows in Beverly Hills, and her enrollment was recognized by the National Spiritual Assembly on July 24, 1951. Horace Holley was secretary at the time. Augusta lived at 1070 Casiano Rd., Los Angeles.   She noted in her prayer book, given to her by the Spiritual Assembly of the Bahá’ís of Los Angeles on the date of her enrollment, that she had attended her first fireside on May 18, 1950, and attended those firesides for fourteen months.

“I first met Augusta in April, 1957 when I was living in Beverly Hills, California. Augusta was known to a neighbor of mine, Mary Ellen, with whom I had become friendly…[Augusta] had married a young naval officer whom she adored. At the outbreak of the Second World War, her husband was stationed in Singapore [sic] where Augusta joined him. After the Japanese attack on Pearl Harbor and their invasion of Malaysia, Augusta and her husband were taken prisoners in Singapore, separated, and sent to prisoner of war camps for the duration of the conflict [Augusta was in the Stanley Camp in Hong Kong]. I remember I was horrified when she told me this and commented that she must have suffered greatly, to which Augusta gently replied that of course it was often very difficult, but also some of her happiest and most important life experiences had happened during her internment for which she would always be grateful. I got the impression that these may have been deeply spiritual experiences, possibly due to being stripped of everything she held most dear, but this is because I found Augusta to be a calm, loving, but strong personality who seemed to live continually at a much deeper level than most people. ..At the end of the war, Augusta was released and repatriated, but she said never knew for sure what had happened to her beloved husband. She was nevertheless calm about her great loss and felt that he was ever with her in spirit, and she had ‘wonderful memories’ which sustained her. She said she had never wished to marry again…During the relatively short time that I was in close contact with her, Augusta was always kindly, hospitable and helpful, with a calm, wise, and loving personality…I remember her as being quite tall and stately; a fine looking woman.” –   Jan Mughrabi, October 2001, 143 Southfield  Avenue, Paignton, Devon. TQ31LD England

Augusta’s sister Muriel Elwood at some point moved to Ojai, California, and Augusta moved to Santa Paula in 1964, encouraged by friends and also to be nearer to her sister. Her first address was 123.1/2 N. Mill St., Apt. 3.   Previous to her passing, she lived at 965 Railroad Avenue in Santa Paula.

Upon moving to Santa Paula, Augusta discovered Mich Yamamoto, and they became devoted friends. An instant bond formed between them; he having been in a relocation camp in the U.S. at the same time that Augusta was in a Japanese internment camp in Hong Kong. 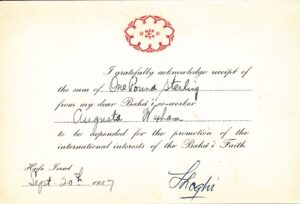 In 1980 Augusta moved to Merriman Manor assisted living at 404 Main Street in Santa Paula, where she lived until 1984. Bahá’í friends visited her regularly. When she passed away in 1984 in the Santa Paula hospital, Jean Eaton and Molly King were sitting on either side of her, holding her hands. 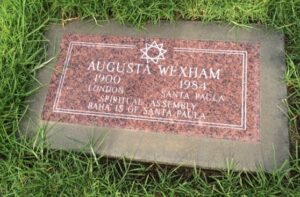 Anne King Sadeghpour grew up knowing about the Faith from her mother and enrolled at the age of 19. Pioneering became synonymous with being a Baha'i and she took part in teaching and administrative activities in Mexico, Spain, and Nicaragua from 1971-1990. At present she is part of the California community.