In the 1930s she and Laura dreamed up the notion of the Six Nations Pageant, an annual showcase of Mohawk history and culture. McKenzie Creek ran through her property, and Emily incorporated it into the pageant with portrayals of characters such as the famous Six Nations writer and performer Emily Pauline Johnson, ‘Tekahionwake’ reciting her poetry from a canoe. 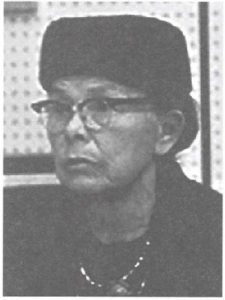 O SON OF SPIRIT!
The best beloved of all things in My sight is Justice; turn not away therefrom if thou desirest Me, and neglect it not that I may confide in thee. By its aid thou shalt see with thine own eyes and not through the eyes of others, and shalt know of thine own knowledge and not through the knowledge of thy neighbor.   Bahá’u’lláh

Emily General of the Turtle Clan lived her life on Six Nations Reserve in southern Ontario, Canada.[Six Nations (or Six Nations of the Grand River), is the largest First NationsReserve in Canada. It is the only Reserve in North America that has representatives of all six Iroquois nations living together.]  Six Nations is part of the Iroquois League—an alliance formed by the Huron prophet, Deganawidah, ‘The Great Peacemaker’. Emily’s mother was Mohawk, her father Cayuga. She had one sister, Laura, and two younger brothers.

In the 1930s she and Laura dreamed up the notion of the Six Nations Pageant, an annual showcase of Mohawk history and culture. McKenzie Creek ran through her property, and Emily incorporated it into the pageant with portrayals of characters such as the famous Six Nations writer and performer Emily Pauline Johnson, ‘Tekahionwake’ reciting her poetry from a canoe. [Born and raised on the Six Nations Reserve…poet and performer Emily Pauline Johnson was the daughter of a Mohawk chief and his English wife. She was educated mainly at home, studying both English literature and Mohawk oral history and legend. https://www.poetryfoundation.org/poets/emily-pauline-johnson]

Prior to becoming a school teacher, Emily resisted police when they forcibly relocated twenty-one children from her community to a residential school 900 kilometres away.

“…these Indians, should they be educated and guided, there can be no doubt that they will become so illumined as to enlighten the whole world.” – Tablets of the Divine Plan

Emily General entered Hamilton Normal School in 1925 and graduated in 1926. She was fluent in Mohawk and Cayuga. Shortly after graduation she began teaching for the Six Nations School Board. Emily made great efforts to impart her high standards to the children of the community. She taught them to take pride in their work, to strive for excellence, and to care for one another, to sit up straight, carry their heads high and their chins up. She always praised them when they did well. She cared deeply for her people, envisioning children learning to grow medicinal herbs and becoming stewards of the environment.

In July 1930 Emily accompanied a group of chiefs from Six Nations to London, England, to meet representatives of the Crown in an effort to reclaim the terms of the Haldimand Treaty of 1784 which confirmed the sovereign status of Six Nations. [On 25 October 1784, Sir Frederick Haldimand, the governor of Quebec, signed a decree that granted a tract of land to the Haudenosaunee(Iroquois), also known as the Six Nations, in compensation for their alliance with British forces during the American Revolution (1775–83). This tract of land, known as the Haldimand Grant or Haldimand Tract, extended for 10 km on both sides of the Grand River (southwestern Ontario), from its source to Lake Erie. Negotiations about title to the Haldimand Tract still continue between the Canadian government and the Six Nations Confederacy. https://www.thecanadianencyclopedia.ca/en/article/haldimand-proclamation]

My calamity is My providence, outwardly it is fire and vengeance, but inwardly it is light and mercy… 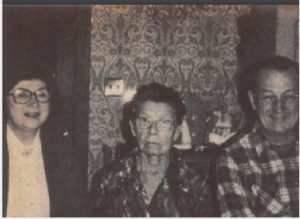 Although Emily General was a successful teacher for the Six Nations School Board she lost her job because of her participation in that delegation and again when she refused to participate in an oath of allegiance to the Crown. Although tiny in stature, she possessed a commanding strength.

To make ends meet Emily became a newspaper carrier, frequently stopping by at Bobby’s Grill for coffee and lemon pie after delivering her Hamilton Spectator newspapers. One day she was surprised to see a number of people entering the restaurant. When she asked the owner, Bobby Jamieson, the first Bahá’í on the Reserve, the reason for this influx, he explained they were holding a Bahá’í meeting at the back and invited her to attend. As a result, Emily declared her belief in Bahá’u’lláh in 1961. She found Baha’u’llah’s teachings similar to the teachings of Deganawidah and the Longhouse religion. Grace General, the wife of a cousin, also became a Bahá’í.

Phyllis Lickers, Bobby Jamieson’s widow, remembers Emily loved to work outside with her plants. “She also liked to think the best of everyone no matter what, and always had something good to say about them-some little gem in their disposition that she would focus on.”

Emily was a sought-after historian. It was important to her that her people retain their history. As well, she dedicated herself to bridging the gap between native and nonnative cultures frequently travelling with her nonnative teaching friends Helen and Dan Kelly.

Emily was extremely direct and open about her Bahá’í Faith.

Many requests came for Emily to address nonnative gatherings. She was a great speaker and exerted every effort to help people understand native culture and history and the relationship of teaching with pure motives and happy hearts.

She visited many reserves in Ontario and attended native councils such as the Mohawk Council of Kahnawake, Quebec. From these meetings, she branched out to include the Ojibwa at Rama Reserve. She was delighted to be able to fly to Cape Breton Island to visit the Mi’kmaq in Eskasoni First Nation where her influence contributed to the establishment of Eskasoni’s Bahá’í Centre. 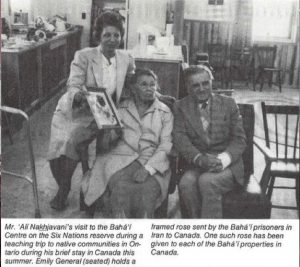 Emily planned to attend the February 1977 Intercontinental Teaching Conference in Mérida, Mexico, but both Emily and Grace General refused to apply for Canadian passports. She firmly believed that she had witnessed the Crown affirm the Haldimand Treaty and her people’s sovereignty. On their behalf John Sargent approached Canada’s Department of External Affairs and acquired a letter to present to Mexican authorities stating they were “citizens of North America.” Inspired by what they had experienced they formed the Spiritual Assembly of the Bahá’ís of Six Nations on their Reserve on their return.

“To one who devoted all her life to the cultural development of her people.’’

In Alberta, Allison Healy from the Blood Reserve recalls Emily wearing her traditional buckskin dress and explaining the workings of the Iroquois Confederation. “She was a real general, a very inspiring and intelligent woman. She taught us about the power of that matriarchal system, how the clan mothers chose the leaders and would kick them out if they didn’t live up to the women’s expectations.”

On October 13, 1984 the Gahendena Bahá’í Centre was dedicated on Emily’s Six Nations Reserve where, in September 1985, Six Nations hosted its own native council. Beside the driveway leading to the Bahá’í Centre next to Emily General’s home two pine trees were planted; the first for Emily General. It was dedicated: “To one who devoted all her life to the cultural development of her people.’’

Emily completed the circle of her earthly life at the Iroquois Lodge Nursing Home, a place responsive to her peoples unique spiritual and cultural needs on November 21, 1993. As a teacher and an historian her legacy endures. A Six Nations school, The Emily C. General School was named in her honor by the people of her Reserve. But above all her legacy endures through her potent example as a unifier, on and off the Reserve.

We have been grieved to learn of the passing of Mrs. Emily General, distinguished leader and historian of the Six Nations people. Her strong commitment to the Faith contributed greatly to the respect with which its message was received among Native Canadians.

Please assure the members of her family and the many Canadian Bahá’í’s who knew and admired her of our prayers for the progress of her soul in the Abhá Kingdom. – Universal House of Justice, November 23, 1993

Native Indians born in Canada are therefore entitled to enter the United States for the purpose of employment, study, retirement, investing, and/or immigration” if they can prove that they have at least 50% blood quantum, and cannot be deported for any reason. Unlike other legal immigrants, Canadian-born Native Americans residing in the US are entitled to public benefits and domestic tuition fees on the same basis as citizens.  “First Nations and Native Americans”. United States Embassy, Consular Services Canada. Retrieved December 1, 2020.

Courtesy of Will Naylor