In 1990 she was appointed as a counsellor for Australasia by the universal House of Justice.  In 1975 while attending the National convention of the Bahá'ís of the Northwest Pacific Ocean with its seat in Pohnpei , she was appointed as an Auxillary Board Member.  Hand of the Cause Mr. Collis Featherstone and his wife were in attendance at this convention. 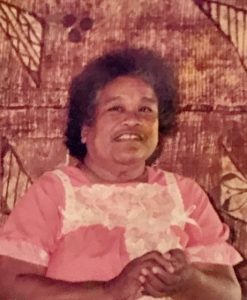 In 1995, the world center of the Bahá’í Faith called for a conference of believers in Australasia to come together and consult on teaching this Baha’i faith throughout the region.  Friends contemplated what the conference should be called. Counsellor Betra  Majmeto was a vital memberof the organizing team for this gathering. She specifically worked on planning the logistics of this momentous event. She had a vision that the ocean which surrounds our islands has turned into light and therefore this gathering became known as the “Ocean of Light Teaching Conference”.  From it came many souls who pioneered in different lands and places and rose the call of Baha’u’lláh to the inhabitants of these lands and islands.

Betra was born in 1931 on Ujae Atoll located in the Northwestern part of the Marshall Islands during the Japanese administration of Micronesia.  These atolls are referred to as Kabin Meto, which literally means the bottom of the Sea , and is considered to be the most traditional area of the Marshall Islands.   At a young age she was asked to move to the capital, Majuro to be trained to become a teacher.  This was a big move for this island girl.  But it changed her life for something she never dreamed of before.  She had a great love for learning English and reading English literature. After some intense training, at the young age of 14, she was put to work and taught English to others.  It was her great capacity and mastery in English that made her known in the workplace. She was sent by the government then called Trust Territory Government to travel to different places in the Pacific region for training in other fields and to attend many seminars.  She was finally able to finish high school in the only accessible high school in Pohnpei Island.

As she was sent to different places for training she came to meet Virginia Breaks (Knight of Baha’u’lláh for Micronesia) in Fiji and they became best friends.  Betra found special love for this woman and her life of service.  “What is in this white woman that empowers her to serve our people in these islands with so much love and dedication?”  Betra wondered. She wanted to know the real reason from her friend Virginia.  But unfortunately they could not be always together as Betra was sent to many places to train and help the Micronesian community, especially Micronesian women.  But she would always let Virginia know where she is going and Virginia would follow up on her like her own daughter.  Every place Betra went, if there were Bahá’ís there Virginia would inform the Bahá’ís to watch over her, meet  with her and tell her more about the faith.

It was in 1963 when Betra was in Hawai’i she was invited to a Bahá’í gathering where all her questions were answered.  She returned to her hotel and prayed and prayed, there was a fire in her heart, something burning from deep inside and she realized she wants to be like Virginia and desired to connect to the source of this power.  It was late at night but this fire was not settling in her heart and she knew it must be conveyed to others.  So she called the Bahá’ís and told them I want to become a Bahá’í.  Friends immediately went to her place and after she signed her Bahá’í card that night they celebrated it and the world center of the faith was informed right away of her declaration and the opening of new territory to the faith.   There was exceeding joy and excitement everywhere as Betra became the first Marshallese Bahá’í.  When they ask her what was in the faith that attracted her the most, she answered that it was the Writings of Bahaullah. The leaves of the same branch, and flowers of the same garden.  That night became a turning point for her life as she now had to face the massive work ahead of her and the challenges of parents and a husband, her own people questioning her.  Upon her arrival she felt as though she was the only one knowing the redeemer of the world.  Though alone, she knew she had Virginia Breaks to turn to at moments of challenges and anxiety.  And Virginia, though not in Majuro, kept communicating with her and kept showering her with unconditional love.  Betra felt the first one to know should be her husband but also felt it was not time for him and that he may not be he ready to receive the faith.  She prayed many nights asking for help and support.  How can I share my new found faith with my people she cried many nights as she turned to shrine of Baha’u’llah in supplication.    Soon her prayers were answered and a young Bahá’í couple from Kiribati Mr. and Mrs. Edwin Pedro pioneered to Majuro.   They spent a lot of time together and started to share the faith with others.  The first one to teach was her husband who contrary to Betra’s thinking accepted the faith and severed with her at the first Local Spiritual Assembly of Majuro. Betra was a delegate to the convention of the Baja’is of the Northwest Pacific Ocean comprising of the FSM, state, Guam, Saipan, Palau and Marshall Islands in 1970.  She served in the NSA and other capacities during these years and married her second husband Jiem Majmeto, also a dedicated Bahá’í.

In 1975 while attending the National convention of the Bahá’ís of the Northwest Pacific Ocean with its seat in Pohnpei , she was appointed as an Auxillary Board Member.  Hand of the Cause Mr. Collis Featherstone and his wife were in attendance at this convention.   In 1990 she was appointed as a counsellor for Australasia by the universal House of Justice.  She served that post until 2000.  As the faith was going through large enrollments in the Marshalls including youth, she was asked to go to Columbia and see with her own eyes the development of Institute process and the community building movement.  In Columbia she rode on donkey and horse to reach some of the villages for the first time in her life.   She tasted real experiences of expansion that set her heart to launch in Marshall Island.  She realized two segments were in need of empowerment and capacity building, the women and the youth of Marshall Islands.  She was also part of Public relations work for the faith asshe developed a profound relationship with first president of Marshall Island Amata Kabua and the first lady.  They studied messages togetherfrom the Universal House of Justice. The first lady and president were very thankful to her.  When President Kabua was asked to talk at the United Nation to all the assembled nations, he used the document “ The Promise of World Peace“ a statement by the House of Justice as the base of his talk.  It was during the ABM conference closing night that president Kabua was asked to give the closing remarks. A number of counsellors and member of ITC, Mrs. Joy Stevenson alongside some of the ABMs from neighboring nations were present.  At the end of his talk,President Kabua wished his yearning to become a Bahá’í to the astonishment of all those present in the audience.  Betra left a mark of her physical life through all those who came into contact with her. Every where she went she was known as a Bahá’í.  Women still talk of her as they witness the coming of age of humanity to maturity and the Youth who have become parents see their promised day has come and theirs is to continue building the kingdom of God on earth as their beloved mother Betra Majmeto did.

Manoucher Sabet is a pioneer of 37 years in Mariana Islands. He is currently serving on the National Spiritual Assembly. He was a previous Auxiliary Board Member. His wife is from Korea and they have three wonderful children. The Sabet family turly love the indigenous people called Micronesians.