He would arrive in a country, usually unannounced, and immediately notify the National Spiritual Assembly, not to ask permission to teach, but to tell that he was there and what he was planning to do. He did not want to be a burden for any NSA, so he did not want the news of his teaching activities to come as a surprise. 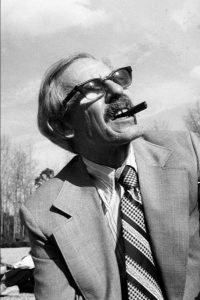 In his late 80s, Elwin Howard decided to “go over the water,” that is, return to Europe, where he was travel-teaching just a few years earlier. Legally blind and alone, he started these excursions in London. He also visited the Bahá’í Holy places in Haifa.

From there he went to Egypt, because he always wanted to go there. Still in his thrifty ways, he stayed in a youth hostel. The young Moslems were curious about this American in his late 80s staying at a youth hostel and befriended him. He was neither timid nor cautious about telling them about Bahá’u’lláh. That resulted in his being put out of his lodgings and, eventually, out of the country.

Who was this fearless Bahá’í who, in his late 80s, would go galivanting about the globe?

Let’s go back to 1972. Sixty-one-year-old Elwin Howard was recently widowed. An accident left him totally blind in one eye, with less than 20/200 vision in the other, making him legally blind. He normally wore thick glasses, just to see his way around. If he wanted to read a restaurant menu, he would pull out another pair of thick lenses – really magnifying glasses, put them over the ones he was wearing, and read the menu.

With his limited vision, he saw an ad for traveling to Mexico City by bus for $62. Despite his condition, and never having traveled out of the country before, he decided to become an international traveler. He didn’t even know he needed a passport.

By the time he landed in Mexico City, he had learned he needed a passport. So, he went to the American embassy. There, he met some Bahá’ís who were headed for the Temple dedication in Panama. They were mostly youth and driving a modified school bus. Elwin struck up a conversation with them and he was asked to join them to share expenses. 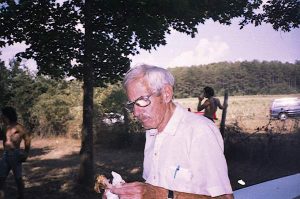 He had never heard of the Bahá’í Faith and had no interest in religion. He did want a cheap way to get to Panama, and he was strongly attracted to the group. So, he went with them. He became increasingly impressed with the high standards of the young people he was traveling with and, incidentally, he learned about the Bahá’í Faith.

During the dedication of the Temple, he stayed at the camp to watch over the bus. He surprised them on the last day of the conference by enrolling in the Faith, which enabled him to visit the temple and was the beginning of his life of service.

It had taken the group four days to go from Mexico City to Panama and nearly two months to return, because they stopped to teach in every locality along the way, and Elwin was an enthusiastic part of it.

When the group got back to Mexico City, young Robb McKie joined them. Despite 40 years difference in their ages, Robb and Elwin became lifelong friends and served the Faith together in many interesting ways, starting with opening a business together in South Carolina.

After the business was running successfully, and Robb had married, Elwin turned to other forms of service, even though the McKie home remained his home base and, with great pride, he would talk of the five McKie children as his own grandchildren.

While serving at the Louis G. Gregory Bahá’í Institute in Hemingway, SC in public relations, legally blind Elwin found a low-cost way to send press releases regularly to more than 200 newspapers. With his limited vision in his one “good” eye, he would write press releases and mail out over 200 copies every month. He spoke of this without a trace of pride in his voice, but only to illustrate what anyone can do with a little thought and effort. 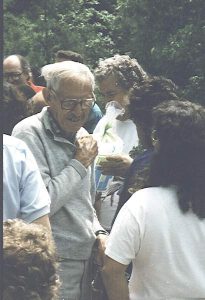 Then, remembering and relishing the teaching he had done on the way back from Panama to Mexico City, he had the strongest urge for more international teaching.

His only income was a social security check of $625 a month. He found he could travel and teach with this income by sticking to a budget of no more than $22 a day. This was enough for him to travel by bus, have lodgings in pensions, and, in his words, eat “three square meals every day.” That was how he spread the Message of Bahá’u’lláh in 59 countries: when he was in his sixties and seventies, legally blind and spending no more than $22 a day.

Normally, Elwin would only stay in a place for a short time, although he remained in Honduras for more than a year. Even with his meager resources, he was able purchase furniture for the Bahá’í Center there.

He would devour messages from the Universal House of Justice and looked upon them as personal instructions to him. While unorthodox in his ways, he was always obedient and responsive to any request from a Bahá’í institution, Elwin nevertheless went ahead with his work without waiting for a committee to tell him where to go or what to do. He just did it.

Whether or not he had read these instructions from the Guardian, he was an embodiment of them:

“Let him not wait for any directions, or expect any special encouragement, from the elected representatives of his community, nor be deterred by any obstacles which his relatives, or fellow-citizens may be inclined to place in his path, nor mind the censure of his critics or enemies. ‘Be unrestrained as the wind,’ is Bahá’u’lláh’s counsel to every would-be teacher of His Cause, ‘while carrying the Message of Him Who hath caused the dawn of Divine Guidance to break. Consider how the wind, faithful to that which God hath ordained, bloweth upon all regions of the earth, be they inhabited or desolate. Neither the sight of desolation, nor the evidences of prosperity, can either pain or please it. It bloweth in every direction, as bidden by its Creator.[1]

He would arrive in a country, usually unannounced, and immediately notify the National Spiritual Assembly, not to ask permission to teach, but to tell that he was there and what he was planning to do. He did not want to be a burden for any NSA, so he did not want the news of his teaching activities to come as a surprise. 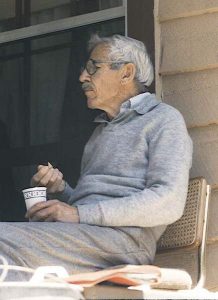 Elwin’s style in Latin America was to go to the rural areas, mingle with the people, and take whatever occasion presented itself to tell them about Bahá’u’lláh.

His style in Europe was different. There, he would travel from country to county, staying in youth hostels and teaching the other residents.

He saw scores of people declare their belief in Bahá’u’lláh, but he didn’t kept track. That was not important to him. He felt his job was to plant seeds. How people responded was between them and Bahá’u’lláh.

He reflected the statement Bahá’u’lláh made to Aḥmad in the Tablet that bears his name: He hath but to deliver this clear message. He said of his years of travel teaching, “I don’t know how many people I affected …. If there is any glory to be given it is to the power of Bahá’u’lláh.”

After his years of international travel, he returned to live with the McKies His only regret was that he didn’t spend more time in each country to help establish firm communities.

Always one to look ahead, he centered his energies on the progress of the Cause locally. Among his strong convictions about community building, were these:

It wasn’t long before the travel-teaching bug bit again. That was when, in his late 80s, he took his final unorthodox trip “over the water” that ended with his being expelled from Egypt.

He returned to live with the McKies, and continued his energetic local service. The final days for Elwin were as devoted, active, and unorthodox as his previous nearly 30 years of service. He was that rare person whose daily life illustrated what he claimed to believe, but whatever he did, he did it his way.

On August 2, 2003 he had been working in the yard when he was called into the McKie house for a Bahá’í class. On the way to his room, he fell down the stairs and had to be taken to a hospital where he stayed for a few days before being transferred to a nursing home. Exactly three weeks later, he died. His faith remained strong in the nursing home, saying his prayers regularly. His favorite was “O God, refresh and gladden my spirit…” which he called his “uptight prayer.” He would say it when he wanted relief from the unpleasant things of life.

Bahá’í men from the area washed and anointed his body and a simple graveside service was held.

A short time later some Bahá’í children (ages 6-9) visited his grave. They were disturbed because there were no flowers. They took the initiative in caring for the grave. They raised over $1,000 to fix things up. This included a granite bench engraved with the words: “We come from God, and unto Him will we return.”

There, visitors could sit, relax, and with their own prayers and meditations, think of the tranquil dynamics of his energetic and productive life, and stop dwelling on their private lists of “the unpleasant things of life.”

John Kolstoe is the author of God-Intoxicated Lovers of Baha’u’llah; Consultation, Compassionate Woman: The Life of Patricia Locke, and The Covenant and You. John has been a Baha'i since 1953. He and his first wife Beverly pioneered for 27 years in Alaska, then pioneered to St. Lucia in teh tropical Caribbean. He also served 8 years at the Baha'i Academy in Panchgani, India where he facilitated workshops on Universal Human Values.