Helen had an absolute belief in the power of prayer and the answers it provided to daily challenges and tests. To her, the answers were clear, immediate and not to be doubted. Hearing someone’s problem, she would later go to them and say, “I prayed about it, and here is what you need to do...” Or she might say, “Well, I prayed about it, and there is nothing to worry about. You just need to be patient.” 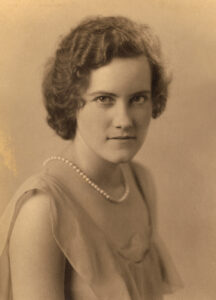 How can a small-town school teacher be transformed and touch the hearts and minds of many people around the world? Helen Louise Garrigues was a shining example of compassion, humility, and unconditional love for others regardless of background, ethnicity, religion, ability, gender, or social economic status. She was incredibly humble and had no desire for status or personal attention. Her tender smile, quiet strength, and generosity were an inspiration to all.

Helen was born on February 7, 1914, in Victoria, Texas, to Samuel Rayburn and Ella Myrta (Rich) Nicks. Her father was an itinerant printer and the family moved frequently from one small Texas town to another, eventually settling in Houston. After college, Helen began her career in education. In 1942, while teaching in Woodville, Texas, she met Lt. Lester M. Garrigues on a blind date, was quickly swept up in his love and married on Friday, the 13th of November. At the age of 28, the “old maid” school teacher, as she referred to herself, and the dashing officer began a life of adventure and travel, living in numerous places in the US, China, and Japan. Not only were they beginning a life of travel together, but also one of spiritual growth. Both Helen and Les had been raised in Texas, where racial prejudice was so deep-rooted in everyday life that it wasn’t even recognized, but just accepted as the way things were. Being in the military with its diversity, and living in other countries, opened their eyes to the reality that everyone—regardless of skin color—was worthy of respect. Helen related that they had to actively become aware of their ingrained prejudices and implicit biases and work hard to overcome them.

Initially, Helen first heard about the Bahá’í Faith in about 1960, when her cousin, Kenneth Wiley, became a Bahá’í. After years of military life, Lester retired from the Air Force in 1962 and they moved to Fort Collins, Colorado. They opened a shop selling imported gifts and home furniture and accessories, and Helen continued teaching elementary school. She loved her students and was always excited to find new ways to inspire them. The naughtier and more recalcitrant a little child or the more withdrawn and shy a young child, the more Helen loved them, knowing they faced the greatest challenges in life. She actively strove to find and draw out the best in each child—and in each person she met. Even before she knew about the Baha’i Teachings, she was embodying ‘Abdu’l-Baha’s injunction, “If a man have ten bad qualities and one good one, look at the one and ignore the ten.” She had a unique ability to engage others, curious about all aspects of their lives, interests and experiences. To Helen, everyone was special.

In 1966, their son, Steve encountered the Bahá’í Faith while in college in Japan and began sending letters home, 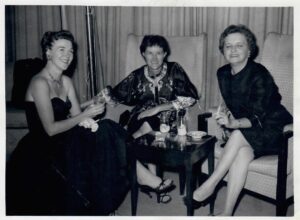 sharing what he was learning. The thin, blue mailgrams were filled with amazing ideas about a new Messenger, one world and the unity of all peoples, the life of the spirit, and so many soul-stirring concepts. Steve and his new Bahá’í bride, Machiko, moved to Fort Collins in 1967 and Helen began learning more about the Faith and meeting the friends in the fledgling Bahá’í community.

Through the coming decades, the Garrigues home was open to everyone and was a central meeting place for firesides, Feasts, and deepenings. Although not yet a declared Bahá’í herself, Helen supported and encouraged the Bahá’í community. She fasted and prayed, and shared the Faith with everyone she met. The Local Spiritual Assembly often turned to Helen for consultation and her balanced, wise, and practical approach to life. What a wonderful service she rendered to this Faith in which she was not officially enrolled yet.

After retiring from teaching, Helen and Les continued their world travels, eventually visiting over 100 countries, islands and territories, making sure to visit the Bahá’í Houses of Worship around the globe. Whether exploring small back roads by car, standing on the deck of a ship, hiking in a jungle, or watching from a train window, the world was their home. 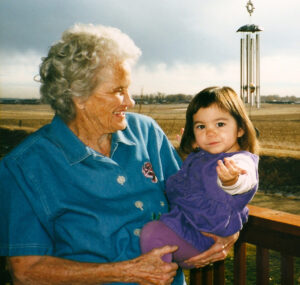 In 2000, Helen formally declared as a Bahá’í, and Les declared a few years later. Helen exemplified the Bahá’í teachings with her steadfast knowledge that her purpose was to know and love God, and that this life was a time to develop spiritual qualities in preparation for the life to come. Helen rejoiced for all who passed into the next life. When learning of someone who had passed on, she would exclaim, “How wonderful!” often shocking the mourners with her fervor and happiness for that soul.

Helen had an absolute belief in the power of prayer and the answers it provided to daily challenges and tests. To her, the answers were clear, immediate and not to be doubted. Hearing someone’s problem, she would later go to them and say, “I prayed about it, and here is what you need to do…” Or she might say, “Well, I prayed about it, and there is nothing to worry about. You just need to be patient.” She once explained that while praying, the answers came to her mind vivid and strong, with certainly, not as vague intimations or possibilities to be considered. 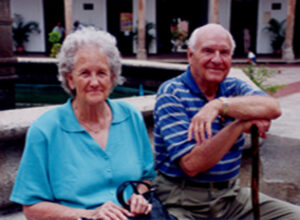 Her life was filled with small miracles, and some not so small. In their last years, in their 90’s, Les and Helen continued to hold Feasts in their home, with the help of their full-time caregiver to prepare food and make the room ready. Helen’s eyesight deteriorated to the point that she could only see blurry shapes, light, and shadow. And as her eyes dimmed, her inner vision grew stronger. Her memory was impeccable until the end. She could recite Bahá’í Writings and prayers from memory.

In the fall of 2011, her beloved husband and life-long companion through so many adventures was dying. Les had been hemorrhaging severely for three weeks, and the hospice nurse said his time was drawing close. With his help, his obituary had been written and was ready for the newspaper. The gravesites were bought and waiting. The undertaker had been informed about the Bahá’í teachings and knew that the family would prepare his body for burial.

Unexpectedly, Helen woke one morning with a blinding headache and after being up briefly, went back to bed, saying the light was too bright and everything was too noisy. The next couple days she could barely speak, answering questions with only one or two words. She lapsed into unconsciousness, restless at first, then quieter as days passed. During that week, Les’ hemorrhaging stopped, he regained some strength, and he was able to sit up in bed. Nine days after her headache, Helen passed quietly into the next world surrounded by her family. Thus, it was her body that the family prepared for burial, with Les looking on from the bed next to hers. It was her obituary that needed to be quickly written. It was for her the grave had waited.

Loving woman that she was, her last words had been, “Oh, I love you.” Spoken with halting difficulty in her unconscious state, spoken to…whom? She had loved so very many people.

Les grew strong enough to sit in a wheelchair and go Helen’s funeral and reception. Then he went back to bed and waited impatiently three more months before joining her on their continuing journey. They were both 97 years old.

A few days after Helen’s funeral, the hospice chaplain told the family that he had visited Les and Helen the day before her headache began. They had prayed together. As he was leaving, Helen went to the door with him and asked him to stay a few more minutes. She said she was unhappy that Les was dying before her. She wanted to be the first to go so that she could be waiting for him, so she could be there to welcome him into the next world. The chaplain reassured her that everything was in God’s hands. He told the family that never before in all his years as a minister had he known someone whose prayer to die had been granted.

Helen loved her family and extended that love to so many others, gracing all with her encouragement, acceptance, and wisdom. So many were blessed by her presence in this world, and by the gentle guidance she gave, and words of wisdom from the Baha’i Writings across the globe. The memory of this brilliant and kind soul continues to inspire us.

Margie Garrigues Brown is the daughter of Helen and Les Garrigues. Margie read those mailgrams from Japan with eagerness and became a Bahá’í in 1967, a few months after Steve, her brother, and his wife, Machiko, moved to Fort Collins. From 1967 to 1995 the Garrigues family home was one of multiple generations at various times consisting of Helen and Les, whom all called Baachan and Jiichan (the Japanese diminutive form for grandmother and grandfather), Steve and Machiko, their daughters Layla Garrigues and Shinobu Garrigues-Pula, Margie and her first husband Jerry Hummel, and their daughter Earen, as well as numerous friends in need of a home. Sometimes as many as 12 people lived together. Helen has two great-grandchildren, Wolfgang Songhurst of Fort Collins, Colorado, and Isabella Garrigues McHenry of Portland, Oregon.

Margie still lives just 15 minutes away from the Garrigues family home, and has served on the Spiritual Assemblies of Fort Collins and Larimer County, Colorado. Helen and Les continue to teach the Faith to those who wander in Grandview Cemetery in Fort Collins, Colorado, where their headstones are inscribed with the words of Baha’u’llah.

Margie Garrigues Brown is the daughter of Helen and Les Garrigues. Margie read those mailgrams from Japan with eagerness and became a Baha’i in 1967, a few months after Steve, her brother, and his wife, Machiko, moved to Fort Collins. Margie's niece Layla Garrigues edited and reviewed this story about her grandmother.