Mr. Hartmutt Grossmann was the son of the Hand of the Cause of God, Dr. Hermann Grossmann. His mother and grandmother were both Bahá’ís. During World War II, he was taken away from his parents by Nazis among many other German children to have them join the party. He remembers this time as the hardest time in his life. After the war, he was reunited with his parents.

When he became an adult, he served as a member of the National Spiritual Assembly of Germany from 1963 to 1969. From there, Mr. Grossmann and his family moved to Finland. He was appointed a Continental Counsellor in 1980, traveling all over Europe to help the Baha’i communities with growth and development. He lived in Israel working at the Bahá’í World Centre for the International Teaching Center, supporting the Universal House of Justice and Bahá’í communities in teaching and protection of their activities worldwide. [1]

Mr. Grossmann was elected to the Universal House of Justice in Haifa, Israel and served from 2003 through 2008.

On December 17, 2017, The Universal House of Justice sends the following to all National Spiritual Assemblies:
Our hearts are grieved to learn of the passing of our dearly loved former colleague Hartmut Grossmann. A distinguished son of an illustrious father, he poured out his life in uninterrupted service to the Cause of Bahá’u’lláh, as a teacher, pioneer, and member of the National Spiritual Assemblies of Germany and Finland, the Continental
Board of Counsellors in Europe, the International Teaching Centre and, ultimately, of the Universal House of Justice. He combined immense personal warmth, generosity of spirit, and serene humility with utter consecration,
unwavering obedience, firmness in the Covenant, and vigilance in the protection of the Faith. His cheerfulness and dedication touched and inspired the hearts of all those who crossed his path, and heightened their enthusiasm for service.
His tireless efforts to raise pioneers and nurture nascent Bahá’í communities left a legacy that will be felt for generations. We are ardently supplicating at the Sacred Threshold that his noble soul may be richly rewarded
and that he may be joyously reunited with his beloved wife, Ursula, who so recently ascended to the Abhá Kingdom. We extend our deepest condolences to his dear daughters, Kerstin, Claudia, Anke, Maren, and Barbara and their families, and will pray that their grieving hearts may be solaced. The friends everywhere are advised
to hold befitting memorial gatherings, including commemorative services in his honour in all Houses of Worship.
Mr. Grossmann was buried on December 28, 2017 in Weiterstadt, Germany where his wife Ursula was previously when she passed away on November 8, 2017. 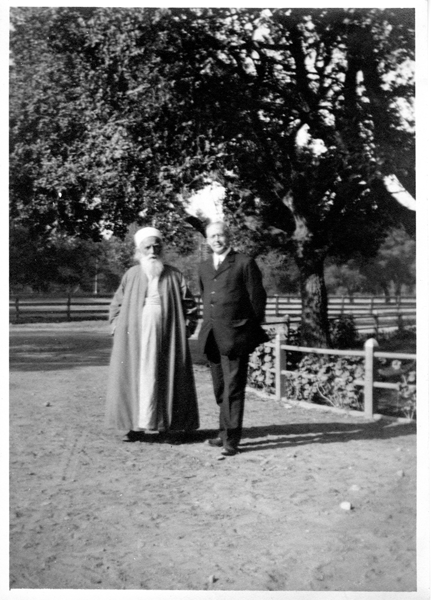