An artist, sculptor and designer by profession, he served as an adviser to the Tongan government. His handiwork can be seen in the several buildings and interiors he designed in the islands. Many such works can also be seen in the United States. 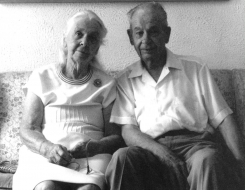 Dudley Moore Blakely declared his belief in Bahá’u’lláh in 1920. He was ever afterwards a devoted servant of the Bahá’í Faith. Following in the footsteps of his illustrious aunt, Lua Getsinger, he spread the Message far and wide. His travels took him in the 1930s to the Sudan in Africa and Guyana (formerly British Guiana) in South America.’ In the spring of 1936 he wrote to Shoghi Effendi seeking approval of his plan to teach in Latin America with his wife, Elsa. A reply dated March 6th written on behalf of the Guardian expressed Shoghi Effendi’s gratification at the news of this ‘projected teaching trip to South America’, and remarked that ‘the lands you are planning to visit are still virgin soils that no Bahá’í pioneer has as yet opened to the Faith. You are therefore called upon to undertake the work of a true pioneer.’ In a postscript in his own handwriting the Guardian added, ‘I am delighted to learn of your plans and of your determination to serve our beloved Cause in such distant countries and under such difficult circumstances. You are often in my thoughts and prayers. May the Almighty, Whose Cause you are serving with such love, fervour and devotion, bless richly your work and fulfil your highest and dearest hopes.’ A letter dated April 8, 1936 written on behalf of Shoghi Effendi by his secretary records that ‘the Guardian is truly delighted to learn of the success of your teaching trip to British Guiana’. There followed years of valuable contributions to the development of the teaching work in Latin America. Between the years 1936 and 1956 the Blakelys were in frequent correspondence with the Guardian, reporting the progress of their teaching efforts and seeking approval of new ventures.

In the early phase of the Ten Year Crusade Dudley and Elsa (or ‘Judy’ as she is known to her many friends) pioneered to Tonga, earning the title Knights of Bahá’u’lláh. A report sent to the Holy Land in the spring of 1956 describing the participation of Tongan believers in the teaching work in the islands brought a reply written on the Guardian’s behalf on May 1, stating, ‘The Polynesians for many centuries . . . have been admired for their fine characteristics and the nobility of their spirit. It would be a great contribution to the world-wide character of our Faith to have people of this race active in its service and representing what their race has to give, as time goes on, in joint Bahá’í national and international councils. Your services there are very deeply appreciated, and the work you are accomplishing, very dear to his heart: ‘They settled in Hawaii at the end of the Ten Year Plan, and in September 1977 pioneered to the Bahamas to help prepare the Bahamian Bahá’í community for the formation of its first National Spiritual Assembly, but circumstances beyond their control forced them to leave the following February. Dudley was then in his seventy-sixth year.

An artist, sculptor and designer by profession, he served as an adviser to the Tongan government. His handiwork can be seen in the several buildings and interiors he designed in the islands. Many such works can also be seen in the United States. He left a legacy of beauty. As a consultant, he produced designs for such diverse items as a small dory for the Department of Fisheries, a pilot boat, a government market,  a refrigeration system and buildings for various purposes. He also designed a set of the first gold coins in Polynesia, in 1962, of which two hundred and fifty proof sets were minted. A year earlier he had designed a five-stamp special issue set commemorating mail deliveries to the islands from the era of the fishing boat to that of airmail. He designed Tonga’s first decimal coin set in 1965. Dudley Blakely ascended to the Abha Kingdom on December 19, 1982 from his homefront post in St. Simons Island, Georgia, U.S.A. Recognizing his many years of dedi- of this region is tending cattle. After the dedicated service, the Universal House of Justice, afflicted friends were forced to evacuate when word came of his death, cabled on January 19, 1983: