Ahmad was born into a family filled with so much love and purpose. The marriage of his parents proved to be purposeful for his short existence as when his soul departed he gave comfort to not only his grandmother when she arrived but soon after to his beloved father and then mother. When Ahmad’s mother was pregnant with him it did jeopardize her life and she was never able to conceive.

Ahmad’s parents were Khadijih Baghum and the Bab (Siyyid Ali Muhammad Shirazi). Ahmad was named by his father.  The marriage of his parents proved to be purposeful for his short existence as when his soul departed he gave comfort to not only his grandmother when she arrived but soon after to his beloved father and then mother. When Ahmad’s mother was pregnant with him it did jeopardize her life and she was never able to conceive.

Ahmad was buried under a cypress tree in the compound of the tomb of Bibi-Du’kh taran (no one knows for certain who Bibi-Du’kh taran was. It is said she was a member of the Royal House of the Atabaks of Fars – The Salghurids while others have claimed that since Bibi-Du’kh tartan means the matron or the Mistress of the Maidens, it is possible that she was the Abbess of a Christian order of nuns).[1]

In the “Suratu’l-Qarab” (The Chapter of Kinship) of His mighty book, the “Qayyumu’l Asma’ , the Bab speaks of Ahmad: ‘O concourse of Light! Hear My call from the point of Fire in this ocean of snow-white water on this crimson earth. Verily, I am God, besides Whom there is no other God. On the exalted throne a beloved noble woman, bearing the same name* as the beloved of the First Friend, was wedded Khadijih.[1]

The Prophet Muhammad to this Great Remembrance; and verily I caused the angels of Heaven and the The term ‘Dhikr’, here translated as ‘Remembrance, was frequently used by the Bab to refer to Himself. Denizens of Paradise, on the day of the Covenant, to bear witness, in truth, to God’s Remembrance.[1]

‘O well-beloved! Value highly the grace of the Great Remembrance, for it cometh from God, the Loved One. Thou shalt not be a woman, like other women, if thou obeyest God in the Cause of Truth, the greatest Truth.  Know thou the great bounty conferred upon thee by the Ancient of Days, and take pride in being the consort of the Well-Beloved, Who is loved by God, the All-Wise, the All-Praised. Be patient in all that God hath ordained concerning the Bab and His Family. Verily, thy son, Ahmad, is with Fatimih, the Sublime, in the sanctified Paradise.’The daughter of the Prophet Muhammmad.[1] 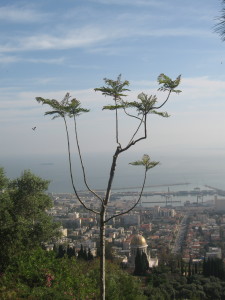 There is this further reference to Ahmad in the “Suratu’l-‘Abd” of the same mighty Book: ‘All praise be to God Who bestowed upon the Solace of the Eyes, in His youth, Ahmad. We did verily raise him up unto God…O Solace The Bab oftentimes refers to Himself in the “Qayyumu’l-Asma’  as Qurratu’l-‘Ayn-the Solace of the Eyes of the Eyes! Be patient in what thy God hath ordained for thee. Verily he doeth whatsoever He willeth. He is the All-Wise in the exercise of His justice. He is thy Lord, the Ancient of Days, and praised be He in whatever He ordereth.'[1]

I’d like to share an excerpt from the book, Lights of Guidance and a letter written on behalf of Shoghi Effendi, the Guardian of the Bahá’í Faith. This letter was written to a Bahá’í who inquired about death etc. The letter was dated October 3, 1943. (Coincidentally 100 years after Ahmad’s death)

“You ask an explanation of what happens to us after we leave this world: This is a question which none of the Prophets have ever answered in detail, for the very simple reason that you cannot convey to a person’s mind something entirely different from everything they have ever experienced. ‘Abdu’l-Bahá gave the wonderful example of the relation of this life to the next life being like the child in the womb; it develops eyes, ears, hands, feet, a tongue, and yet it has nothing to see or hear, it cannot walk or grasp things or speak; all these faculties it is developing for this world. If you tried to explain to an embryo what this world is like it could never understand—but it understands when it is born, and its faculties can be used. So we cannot picture our state in the next world. All we know is that our consciousness, our personality, endures in some new state, and that that world is as much better than this one as this one is better than the dark womb of our mother was….

“Our past is not the thing that matters so much in this world as what we intend to do with our future. The inestimable value of religion is that when a man is vitally connected with it, through a real and living belief in it and in the Prophet Who brought it, he receives a strength greater than his own which helps him to develop his good characteristics and overcome his bad ones. The whole purpose of religion is to change not only our thoughts but our acts; when we believe in God and His Prophet and His Teachings, we find we are growing, even though we perhaps thought ourselves incapable of growth and change!”[2]