Her husband at a very young age masterfully read the Qur’an, wrote in the purest style and people often were amazed at his calligraphy for someone so young. As he was in his teens he could be found in rapture for hours praying with his face always gazing towards the city where Baha’u’llah had lived. According to Hussein Ahdieh and Hilary Chapman in their book ‘Awakening’ One night the Bab got up and left the bedroom and when he didn’t return Khadijih Baghum went to look for him. She saw her husband with his hands raised up in supplication chanting a prayer in his beautiful voice. Tears rolled down his face. 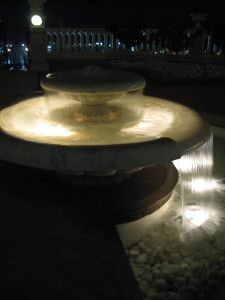 Khadijih Begum (Begum signifies a Lady and was often used as a sign of respect like we would say Ms. or Mrs. today but a little more elevated in the respect department) was the daughter of a prominent merchant in Shiraz. Her father Aqa Mir Ali was importing goods and worked in the family mercantile business and in comparison to his relatives he was the least successful. Her father was her mother’s Hajiyyih Bibi second marriage whom she had one son named Muhaamad-Mihdi, a poet and a daughter Ammih Haji who later married Haji Mirza Siyyid Ali (the guardian of the Báb in his childhood) Khadijih had (as described) one half brother and half sister. She had three full siblings: two brothers Haji Mirza Abu’l-Qasm and Haji Mirza Siyyid Hasan (who became a teacher of medicine and studied theology) and her sister Zahra.

The Báb was her relative, her second cousin once removed. He was three years older and since they were also neighbors they often played together.

Khadijih had several dreams very similar to the Báb. In this particular dream as described by Adib Taherzadeh in The Revelation of Bahá’u’lláh, “One night I dreamt that Fatimih (the daughter of the Prophet Muhammad, the holiest woman in Islam) came to our hours as a suitor to propose marriage. With great joy an ecstasy my sisters and I went to her. She then came forward to me and kissed my forehead. I understood in the dream that she had chosen me. When I woke up in the mooring I felt very happy and joyous, but I felt too shy to share my dream with anybody. In the afternoon of the same day, the mother of the Báb came to our house. My sister and I went to her. Exactly as I had dreamt, she came forward, kissed my forehead and embraced me. She then left. My eldest sister said to me, ‘The mother of the Báb came to propose and asked for your hand in marriage (with her son).’ I replied, This is a great felicity for me. I recounted my dream and expressed the happiness of my heart because of its implications.”

On August 25, 1842, when Khadijih Begum was 20 years old she married Ali-Muhammad (later given the name Báb) . At this point neither being a Bahá’í. (Their ancestry is traced back to the prophet Muhammad) A year later they had a son named Ahmad who only lived for a few months. 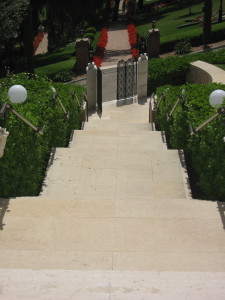 Her husband at a very young age masterfully read the Qur’an, wrote in the purest style and people often were amazed at his calligraphy for someone so young. As he was in his teens he could be found in rapture for hours praying with his face always gazing towards the city where Bahá’u’lláh had lived. According to Hussein Ahdieh and Hilary Chapman in their book ‘Awakening’ One night the Báb got up and left the bedroom and when he didn’t return Khadijih Begum went to look for him. She saw her husband with his hands raised up in supplication chanting a prayer in his beautiful voice. Tears rolled down his face. A powerful, unknown light emanated from him. She began to shake with fear. She couldn’t move. His majesty overwhelming her. At that moment, He turned to her and made a gesture that told her to go back. She returned to bed. The next morning Khadijih saw the Báb and he motioned her to sit near Him. He asked her what was bothering her, and she told Him that she had seen a great change in Him. He was no longer the man to whom she had been married to for two years. He answered her, “It was the will of God that you should have seen Me in the way you did last night, so that no shadow of doubt should ever cross your mind, and you should come to know with absolute certitude that I am the Manifestation of God Whose advent has been expected for a thousand years…” Hearing this, she fell prostrate before Him, believing what she heard. She would serve Him the rest of her life.

It would be remiss of me if I didn’t share what the Báb later revealed about Khadijih Begum it is of the utmost eloquence:

“O well-beloved! Value highly the grace of the Great Remembrance, for it cometh from God, the Loved One. Thou shalt not be a woman, like other women, if thou obeys God in the Cause of Truth, the Greatest Truth. Know thou the great bounty conferred upon thee by the Ancient of Days, and take pride in being the consort of the Well-Beloved, Who is loved by God, the Greatest, Sufficient unto thee is this glory which cometh unto thee from God, the All-Wise, the All-Praised. Be patient in all that God hath ordained concerning the Báb and His Family. Verily, thy son is with Fatimih (Muhammad’s daughter), in the sanctified paradise.

At the age of 28 Khadijih was widowed when the Báb was killed by a firing squad. She later moved in with her sister Zahra. She was to travel Akka (Israel) to visit Bahá’u’lláh in 1882 with her nephew but he couldn’t and she was not able to go (as women could not travel alone). Her health rapidly decreased and died at the age of 60 and was buried in Shiraz.