Hasan Balyuzi, representing the Afnan, was appointed by Shoghi Effendi as a Hand of the Cause of God on October 11, 1957. This was one of the Guardian’s last messages to the Bahá'í world before his sudden passing on November 4, 1957. Hasan assembled along with the other twenty-five Hands of the Cause of God in the Holy Land. He was among the nine selected to search the Guardian’s apartment for a will or testament. 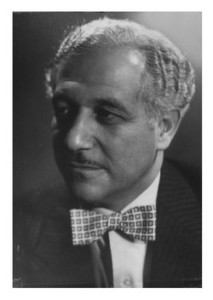 Mírzá `Ali Áqá, Hasan’s father, shared the same descent as the Guardian of the Faith, that is from the same great-grandfather, Haji Mirza Abdu’l-Qasim, one of the two brothers of Khadijih-Bagum, the wife of the Báb. Her daughter, Fatimih-Sultan Bagum was Hasan Balyuzi’s paternal grandfather. His mother also traced her decent from both of the brothers of the Bab’s wife. Thus, establishing firmly through both parents, what Bahá’u’lláh referred, as the Afnan family.

Hasan spent most of his childhood years in Bushire where his father was a diplomat and later Governor of the Persian Gulf Ports and Islands. It was here, at the age of four, where Hasan began to master use of the English language.

During World War I, Bushire was occupied by the British Forces and his father was exiled to India where the family lived for four years in Bombay and then another four years in Poona. It was while in India that two outstanding scholars and friends of his father, who were also in exile, tutored Hasan in Persian, Arabic, and history. He entered Bishop’s College in Poona, an English high school, where he was able to perfect his English. He was also learning Urdu.

After the war, he was able to return to Tehran where his father became Minister of Interior. He attended Cyprus School under the headmaster Prof. Sadiq-A`lam, who later became Persian Ambassador in London and Minister of Education. His father died in May of 1921; then his mother moved back to Shiraz. Because educational opportunities there were lacking, arrangements were made through Professor E. G. Browne by his uncle to take charge of his education in England. However, the old professor’s health was giving out, having had a heart attack the previous year; and therefore, with much regret, he was unable to assume the responsibility. Professor Browne died the following year, in 1926.

Hasan Balyuzi, too young to attend a university in England, went to Beirut and attended classes at the Preparatory School of the American University. At the age of seventeen, while traveling to Beirut, he received a memorable welcome in Haifa by Shoghi Effendi, the young Guardian of the Faith. Earlier, he found in his fathers library a copy of Some Answered Questions and read it with the intention of writing a rebuttal. He also received a manuscript of the Tarikh-i-Jadid, but he remained skeptical, considering himself a Muslim. It was the influence of the Guardian that transformed his interests and confirmed him in the Bahá’í Faith at age seventeen. He described this occasion: “”`My route to Beirut was through the Red Sea, Port Said, and Haifa. It was in the latter part of November 1925 and John Ebenezer Esslemont, the immortal author of Bahá’u’lláh and the New Era, lay mortally ill in the old Pilgrim House. His illness greatly occupied the Guardian of the Bahá’í Faith.'”

“During my stay of one night (November 21-22) on Mount Carmel two eminent Persian Bahá’í physicians who were there, Dr. Yunis Khan Afrukhtih and Dr. Arastu Khan Hakim, were called in the early hours of the morning to Dr. Esslemont’s bedside. Shoghi Effendi sat up with him through the night.”

“The next day I left for Beirut in the company of Dr. Afrukhtih and Dr. Hakim.”

“It was that bounty of meeting Shoghi Effendi and all that I saw in him, which confirmed me in the Faith of Bahá’u’lláh. The course of my life was changed.'”

When he arrived at the American University in Beirut and was asked of his religion on the official forms, he said “Bahá’í.”

He spent seven years studying in Beirut, 1925-1932, first a preparatory year, then a Bachelor’s degree in Chemistry, and eventually a Master’s of Arts in Diplomatic History. He was active in university life, participating in football and tennis as well as activities of the Dramatic Society, the Debating Society, and the Bahá’í Society. It was a happy time in his life, a large number of students participated in the activities of the Bahá’í Faith, often visiting the Guardian during vacations and the summers.

After completing his studies at American University, he went to the London School of Economics for post-graduate work. He studied Diplomatic History, with special references to the relations of the European Powers to the Persian Gulf States. He received his Master of Science degree in 1935; he then studied British Public Opinion on Franco-German Relations after World War I for his doctorate, but was delayed by the difficulty of finding a suitable supervisor and the outbreak of World War II.

It was at this time (February 8, 1934) that the Guardian directed a warning concerning involvement in politics. This was a reply to an article that Hasan wrote in a Persian newspaper on the current political situation in Europe. This was an act that changed the direction of his life.

At Ridván 1933, Hasan was elected to the National Spiritual Assembly of the Bahá’ís of the British Isles and also to the London Spiritual Assembly. For over twenty-five years he devoted himself to the progress of the administration of the Faith in the British Isles; starting in 1936, he found himself working closely with an English Bahá’í who had returned from America to London, David Hoffman. Hasan received approval be Shoghi Effendi to work as an administrator in the offices of the League of Nations in Geneva, being also advised to maintain membership with both the National Spiritual Assembly and that of London, stating that his cooperation was greatly appreciated by all our English friends. During that same year, there was a marked increase in their Bahá’í activities. Hasan became the Vice Chairman of the National Assembly on Ridván 1940. Working for the newly formed Persian Section of the BBC, he moved for a short time to Worcestershire, where he married Mary (Molly) Brown; and in August 1942, he returned to London shortly after the birth of his first son, Hushang.

He continued his work for the BBC full time until 1958; he wrote short stories, plays and talks on current affairs, producing more than a thousand radio programs on Iran and Persian history. He had four other sons, Robert, Felix, Richard and Simeon. He often commented that “there hasn’t been a girl baby born into the family for over two hundred years.”

Upon his return to London, he became the Chairman of the National Spiritual Assembly, traveling and lecturing around the country. He participated in Bahá’í committees such as the Assembly Development Program, New World Order Literature Revues, Archives, and Public Relations. He also became a significant influence on the work of the Ten Year World Crusade, 1953-1963.

In 1938, Hasan Balyuzi published his first real literary work on the Bahá’í Faith, an essay on the life of Bahá’u’lláh. Encouraged by the Guardian, he later published essays on the life of the Báb and Abdu’l-Baha. However, the pressing Baha’i duties prevented him from continuing his literary work for many years, until 1958, when his poor health mandated that he step down from most of his administrative positions and their related activities.

Hasan Balyuzi, representing the Afnan, was appointed by Shoghi Effendi as a Hand of the Cause of God on October 11, 1957. This was one of the Guardian’s last messages to the Bahá’í world before his sudden passing on November 4, 1957. Hasan assembled along with the other twenty-five Hands of the Cause of God in the Holy Land. He was among the nine selected to search the Guardian’s apartment for a will or testament. After a “thorough search,” none was ever found. Hasan became one of the “chief stewards,” guiding the Bahá’í Faith through the next six years, known as the Custodial Period, until the formation of the Universal House of Justice on Ridván, 1963.

Beset by health and financial problems after retiring from his work at the BBC, Hasan reluctantly stepped down from most of his Bahá’í administrative activities. He resumed his literary work in 1963, by completing a trilogy on the central figures of the Bahá’í Faith.

The first book was a biography of `Abdu’l-Bahá which he first initiated over twenty years earlier when Shoghi Effendi first encouraged him. Concurrent with this work, he found the subject of Prof. Browne’s relation with the faith worthy of a monograph. In 1970, he published Edward Granville Browne and the Bahá’í Faith, then the following year, he published `Abdu’l-Bahá: The Center of the Covenant of Bahá’u’lláh. He completed his trilogy with The Báb: The Herald of the Day of Days, published in 1973, becoming the first book on the Bahá’í Faith making extensive use of official documents from governmental archives.

Realizing that the literary work was incomplete, he soon found that there was no accurate historical account of Islam. In 1976, he had published: Mohammad and the Course of Islam.

Hasan Balyuzi acquired a research assistant to help carry out his monumental work, Moojan Momen. Dr. Balyuzi’s’ work on Bahá’u’lláh: The King of Glory was in progress when he suffered a heart attack in October 1979.

He made some recovery and completed his first volume and made considerable progress on the second when he passed away in his sleep on February 12, 1980. His earthly remains were laid to rest near those of his beloved Guardian.

He left instructions to set up the Afnan Library Trust for Bahá’í Faith research, donating all of his books and papers. He hoped that it will someday develop into a research library for all scholars. Moojan Momen wrote of Dr. Balyuzi’s work: “Balyuzi’s character and ability. . . it must be left to future writers to assess these adequately. . . Much of his writing ran counter to present-day styles of scholarly prose. But his work was imbued with two qualities which will cause it to be remembered. . . First was his assiduous pursuit of truth. He would take endless trouble to track down even the most minor fact or date. . . Second, was his integrity. There are no hidden motives in his writing. . . He wrote only what he thought correct after due consideration. His books clearly show him to be a Bahá’í, but nothing is concealed or distorted to protect the Bahá’í Faith, or anyone, or anything. He always maintained that it was best to tell it “warts and all.”‘

The following  publications are by Dr. Hasan M. Balyuzi.

“A Guide to the Administrative Order,” London: Baha’i Publishing Trust, 1941.

“Bahá’u’lláh: A Brief Life,” followed by an essay on the Manifestation of God entitled: “The World made Flesh.” London: George Ronald, 1963.

“Muhammad and the Course of Islam,” Oxford: George Ronald, 1976.

“Eminent Bahá’ís in Iran During the Time of Bahá’u’lláh,” Oxford: George Ronald, 1985.