Mr. and Mrs. Greenleaf became active in the Chicago Bahá’í community. When the Chicago Bahá’ís elected their first governing council, about March 16, 1900, he was one of the ten members. Charles with Thornton Chase, Arthur Agnew, and Albert Windust, were one of four men who founded the Behais Supply and Publishing Board, which was later incorporated (as a not-for-profit company owned by the same four men) as the Bahai Publishing Society. 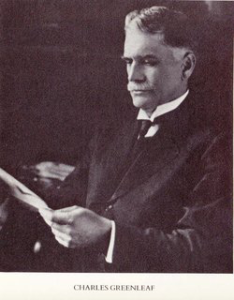 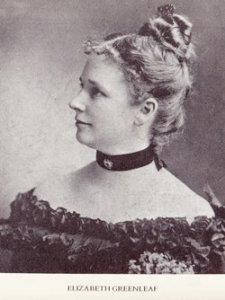 Charles Greenleaf, a Disciple of `Abdu’l-Bahá, was born into a family of New England Puritan stock. He was raised in Wisconsin and California, then as a young man settled in Illinois, where he became a lawyer and worked for Illinois Trust and Savings Bank of Chicago.

On August 8, 1882 he married E. Elizabeth Roemer of Evanston, Illinois, with whom he had two sons, Albert and Charles, Jr. Charles was raised as a strong Protestant. He became a friend of Thornton Chase, probably through relatives—Greenleaf’s uncle lived across the street from Thornton Chase’s father in Springfield, Massachusetts—and when Chase became a Bahá’í he told Greenleaf about the new religion. Charles and Elizabeth took a class on the Bahá’í Faith from Ibrahim Kheiralla in the fall of 1897; dreams convinced them of the truth of the new religion, and they “received the Greatest Name” (which was Kheiralla’s method for enrolling believers) on October 5, 1897.

It wasn’t until 1905 that his attendance again become regular; after the fall of 1907 he attended meetings rarely until 1911, when attendance records cease. With Thornton Chase, Arthur Agnew, and Albert Windust, Greenleaf was one of four men who founded the Behais Supply and Publishing Board, which was later incorporated (as a not-for-profit company owned by the same four men) as the Bahai Publishing Society.

Albert Windust wrote that Greenleaf “was one of the three recognized pillars of strength of the Cause [in Chicago] in the early days,” the others being Chase and Agnew. Greenleaf’s contributions may have been limited by family and work responsibilities; he is not known to have given any talks on the Faith. Upon his death on May 24, 1920, `Abdu’l-Bahá cabled that He was “supplicating Lord of the Kingdom” to submerge Greenleaf in “an ocean of mercy.” He referred to him as a “blessed soul.”

Elizabeth Greenleaf was also very active in the Chicago Bahá’í community. She served as secretary of the Chicago Bahá’í women’s organization in 1905. After the passing of her husband she began to travel extensively to lecture about the Bahá’í Faith. She also moved to various cities that needed Bahá’ís, remaining there until the community was strong enough for her to move again. In 1924 she was elected to the National Spiritual Assembly of the Bahá’ís of the United States and Canada for one year. She went on pilgrimage in 1926, meeting Shoghi Effendi. She died on August 6, 1941 in Eliot, Maine; Shoghi Effendi eulogized her as a “veteran and outstanding teacher” and described her qualities of “deep knowledge of the teachings, profound human sympathy, a heart which mirrored the Master’s love, and a winning sweetness and friendliness.”