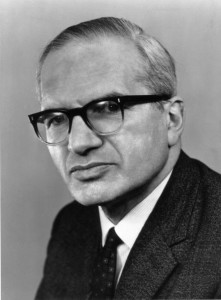 John Ferraby was a British Bahá’í and Hand of the Cause of God appointed by Shoghi Effendi. From 1959 to 1963 he served as a Custodian of the Bahá’í Faith at the World Centre in Haifa, Israel.

He was educated at Malvern and at King’s College, Cambridge, to which he won a major scholarship.

It was in 1941 that he was told about the Faith by a non-Bahá’í. Wanting to know more, he found Dr. Esslemont’s book in a public library. He was by then living in London, so he started to look for the Bahá’ís there, but he had difficulty in finding them because during the blitz, the Bahá’í Centre was empty most of the time. However, finally he found someone and after a couple of visits he wanted to be accepted as a member of the community. Almost imediately he began to work for the Faith, becoming in less then an year a member of the London Spiritual Assembly and of the National Spiritual Assembly. In 1943 he married a fellow member of the National Assembly, Dorothy Cansdale.

In 1946 he became secretary of the National Spiritual Assembly, working at first in his spare time and from 1950 as full-time secretary. This work he continued, living in the National Hazíratu’l-Quds in London from December 1954, until he went to serve in the Holy Land at the end of 1959. During a good deal of the time he was also manager of the British Bahá’í Publishing Trust, as well as being an active teacher and committee member. From 1951 to 1956 he was busily involved in the work of the Africa Committee and during the opening of the various territories in Africa, at that time mostly colonies or protectorates, he attended to most of the government relationship, acting in his capacity of national secretary. He attended the first Intercontinental Conference, held in Kampala, Uganda, in 1953, as well as the successive Intercontinental Conferences which were held in Europe.

In January 1955, he made the pilgrimage to the Holy Land and was in the presence of the Guardian, which deepened his already great devotion to Shoghi Effendi. This of course made a tremendous impression on him and it was in consequence of advice from Shoghi Effendi to write for the Faith that he produced his book All Things Made New. He seemed to have received some special stimulation and wrote at fever heat in every moment of his spare time until it was completed, as if he had been inspired and could not stop. The book has been widely used, running to one edition of the British Isles and three in the United States.

In 1957, in the last group of Hands of the Cause appointed by the Guardian, John Ferraby was included, and consequently he carried a big share of the work and responsibility for the arrangements when Shoghi Effendi died and was buried in London. After that he took part in the first sorrowful gathering of the Hands of the Cause in Haifa and stayed on there for over three months to help. In December 1959, John went to live in Haifa as one of the Hands of the Cause resident in the Holy Land and remained there until Riḍván 1963. After that he returned to England and lived in Cambridge for the last ten years of his life, working for the first few years as one of the Hands of the Cause in the continent of Europe, dealing with their secretariat and traveling a good deal. Later it became no longer possible for him to serve in this way. 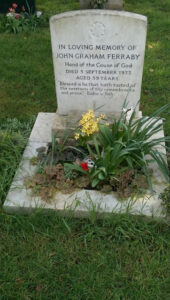 John’s whole life as a Bahá’í was one of activity and intense devotion. From the moment of his declaration the Faith came absolutely first with him and nothing else mattered, and this was true until the end of his life, whatever his circumstances and condition.

Editor’s Note:
At the age of 27, John Ferraby, Hand of the Cause of God, hears about the Bahá’í Faith from Victor Cofman, a non-Bahá’í.