When I found out it was a religion, I ordered them out of my house. No way was I going to allow anyone with a fancy religion into my house. I had had enough of religious freaks, and didn't want to be browbeaten with more fear tactics. After they left and with the click of the front door, I became blind drunk. 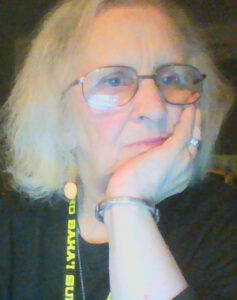 Tricia as she prefers to be called has three siblings: one brother and two half sisters. Her parents, Eileen Marjorie Barrett (died in 1971), a housewife and who had no interest in religion and at the age of 48 said, “ It’s not that I don’t believe in God, but I just don’t believe in Churchianity.”  Her father,  James Edward Hague was a photographer.  Her grandfather was Samuel Edgar Barrett and was the last child of a Lord. His house is a protected historical building in Greytown, which was built in 1874.

Tricia attended Queen Elizabeth Technical College, but left without any qualifications on her 15th birthday.  She married at the age of 19. This wasn’t her only marriage.  In the course of her life she has been married 5 times. She has 5 children. The first two of which were kidnapped as babies.

Well here is what we found to be so fascinating about Tricia and caused us to interview her. At the age of 27 her whole life changed. She had till then, begun to drink heavily and take drugs. She was hurting inside, but didn’t understand why, and was terribly depressed.  In her own words: ‘Suicide attempts continued and God I was lonely. I was in the hotels at 7 o’clock every night and my kids were suffering.’ Her drinking was by now at a high level of four and a half bottles of bourbon a day. I had my driving job, delivering newspapers in the country for about 3 hours a day, and I would be driving at breakneck speed so that I could get to my favorite hotel to top up for the run home. My driving suffered, and I ploughed through many a flock of sheep, killing them and denting the car. 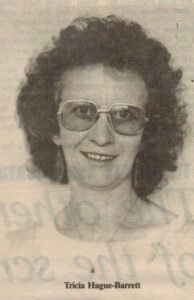 My children were in the back of the car, without seat belts. They just had to sit there amongst some tractor parts and other things. I was not only a mess, but I was unsafe to be with. I was doing that job to earn enough to drink. My house was a disgrace, and I had no purpose in life.

Then, one night, I needed a babysitter so that I could go out on one of my binges. I couldn’t find one anywhere. I picked up the paper that day and looked in the Situations Vacant column, where a young girl was asking for part time work. After much hoo-ha, I got a friend of hers to babysit for me for that night. Off I went to get drunk. Boy was I going to do it this time. My doctor had told me that if I did not give up drinking I would be dead in six weeks, so I figured I might at least enjoy my life to the fullest.

Off I went to the pub, and got plastered. I drank myself silly, and somehow found my way back home again with a crate of bourbon that some guy had bought for me.

As I staggered into my lounge, eleven people were waiting for me, all sitting cross-legged on the floor. The lady who was babysitting had asked if she could bring her husband around (they were newly married) and I had told her that she could do anything she liked. All I wanted was to be able to get to the pub.

A drinker always wants to share her drink to the last drop, so I offered everyone a drink. They said, “no, they didn’t drink.”

I couldn’t believe that was possible.

“Oh go on, have a drink, everyone should drink, its the only way to get through this horrible existence.” I said to them. They refused. When I asked why they didn’t drink, they said, “Because we are ——-”

I couldn’t hear that word. Being slightly deaf, I used to lip read a lot in order to hear what people were saying. I couldn’t be bothered if they were not going to talk to me clearly. Anyway, I didn’t make any further inquiries, and they left.  What happened next was not expected. Immediately the door clicked shut behind them, I became sober, and felt the sting had been taken out of the night. I made myself a drink and ended up drinking quite a lot. When it didn’t have any effect, I went to bed.

The next day, like all other days, I awoke to my bottle of bourbon beside the bed, and poured myself a drink. It didn’t have an effect on me either. In fact, all week, nothing could get me drunk.

I was furious. By the time Saturday night came around again, I was ready for a binge. So I got the same woman back again, and off I went. I got stuck into the drinking, but had no reaction to it at all. I was really angry, now. It was surely that woman and those people who were in my house.

Were they putting a hex on me or something?  All the fears of Satan taught to me by the church only heightened my thinking, and with that in mind, I went home to tackle these witches. “

“Last week,” I said through gritted teeth, “when I asked you to have a drink with me, you said that you didn’t drink, and that you were……. “What?” I asked again waving my hand around in a circle.

When I found out it was a religion, I ordered them out of my house. No way was I going to allow anyone with a fancy religion into my house.  I had had enough of religious freaks, and didn’t want to be browbeaten with more fear tactics.

After they left and with the click of the front door, I became blind drunk. I don’t remember much of the next two months, after trying to struggle up the stairs to bed.  I fell down my stairs many times in one attempt to get up to bed.  My ribs hurt, I felt like I was crushed.   I dislocated my knee once more, and had to go to the doctors the next day.

The court bailiff was coming every day for more money for bills, my kids were screaming from lack of food, and I was at my wits end.  Well, the depression was getting to me. I was still drinking heavily, and one day, I was sitting in the lounge with a drink in my hand, having cleaned up my house. I was alone. Nobody loved me, I was sure about that. The tears were running down my face. I mustered all of my strength, and cried out “God! If you’re really there, send someone to me, right now!”

At that moment there was a knock at the front door. I was astounded. Thinking that it was a coincidence and just a pack of naughty kids on their way home from school, I went out to the door ready to give them a real telling off. However, I came face to face with my babysitter.

Tears welled up and overflowed. I brought her inside and we talked about lots of things. I told her what was happening to me, and she listened. God, I have never been so grateful to anyone in my life.

Tricia published her first book, ‘In My Father’s House’ in 1991, a coloring book. She hopes to publish her autobiography soon which is a wonderful piece of work, so look for that and we will make sure to update this page when we have publication information.

She was elected Secretary of the Bahá’í Group the day she declared.  And she was the First LSA Secretary of Palmerston North in 1974. She was appointed a Public Relations Officer and served for 15 years. She served on Spiritual Assemblies in 5 different areas within New Zealand. She has spent 12 years as a Radio announcer in Hamilton, NZ as part of a three man team. She visited the Marshall Islands to help create 52 Radio shows based upon The Hidden Words of Bahá’u’lláh in fulfillment of a desire of the Marshall Islands King which was to have a copy of The Hidden Words in every household on the Islands.

We received sad news after enjoying a friendship with Tricia for 2 years from her family, that she passed away  on Sunday 11th November 2018. Her funeral service will be held on Friday November 16, 2018 at the Hamilton Baha’i Centre at Ross Crescent, Fairfield starting at 11am. Tricia would love for you all to come along and celebrate her joyous passing to the Abha Kingdom to share stories, songs, and memories of her. Funeral Service and reception details:
Location: Hamilton Baha’i Centre, Ross Crescent, Fairfield
Time: 11am
Burial Location: Oak Lawn, Newstead Cemetery, 395 Morrinsville Road
Time: 1.00pm

Tricia leaves behind her children Felicity, Mike and Richard