Aqa Husayn-i-Ashchi (Ashchi in Farsi means cook or maker of broth) was Baha'u'llah's cook. His father died on his way to ask for the hand of his brother's daughter to wed 'Abdu'l-Baha. Aqa Husayn-i-Ashchi's uncle Ustad Ismail raised him for a short time.

Aqa Husayn was a native of Kashan. During the Báb‘s stay in Kashan, Aqa Husayn’s father, Aqa Muhammad-Javad, had met the Báb at the house of his uncle, Haji Mirza Jani, and had become a believer. When Bahá’u’lláh was in Baghdad, Aqa Muhammad-Javad emigrated to Baghdad and settled there with his son.

He was entrusted by Bahá’u’lláh with the mission of going to Tihran to ask for the hand of the daughter of His brother, Mirza Muhammad-Hasan, in marriage to `Abdu’l-Bahá. As he was returning from this mission he fell ill at Kirmanshah, and died as he reached Baghdad. Aqa Husayn was raised for a time in the care of his uncle; Ustad Isma`il, but when Bahá’u’lláh was about to leave Baghdad, Aqa Husayn was honored by being accepted into His household, initially to serve the womenfolk and later as a cook. (Ashchi means cook or maker of broth.) He accompanied Bahá’u’lláh at all stages of His exile until `Akka was reached. He was involved in the murder of the Azalis and served a term of imprisonment. After this he opened a small shop in `Akka. He lived throughout the period of `Abdu’l-Bahá’s ministry and into that for the Guardian of the Faith, and died in AH 1446 (1927-8). —Bahá’u’lláh: The King of Glory, pp. 473-4. [1]

Parts of the original transcript is available at h-net.org it is in Farsi, if you want the English translation, you will have to seek permission through email.

The following is a talk by his son Hossain Achtchi who spoke at the very first cloud conference. What an extraordinary life. His father was Aqa Husayn-i Ashchi, Bahá’u’lláh’s cook, who joined His household as a teenager and was thus ‘Abdu’l-Bahá’s companion from when ‘Abdu’l-Bahá was 19 to the day of His passing in 1921.

There can’t be that many people left alive a single generation apart from intimate companionship with Bahá’u’lláh Himself. Hossain will share his family’s first hand recollections of ‘Abdu’l-Bahá and tell us what it was like as a family to grow up in the influence of such memories.

I share below an anecdote from the autobiographical memoirs of Hossain’s father recounting an episode he remembered as a teenager living in the household of Bahá’u’lláh, introduced by Adib Taherzadeh:

“One of the features of the life of Bahá’u’lláh was that although born of one of the wealthiest families in Persia and having lived many years in luxurious surroundings, He spent forty years of His Ministry in an austerity to which He had never been accustomed during the earlier days of His life. For two years he lived in the utmost poverty in the mountains of Kurdistán where many a day He subsisted on milk alone. In Baghdád He lived a simple life and had to endure many privations. ‘There was a time in ‘Iráq,’ He affirms in a Tablet, ‘when the Ancient Beauty…had no change of linen. The one shirt He possessed would be washed, dried and worn again.’ In Adrianople and ‘Akká He submitted Himself to the privations and hardships which a ruthless enemy had imposed upon Him. 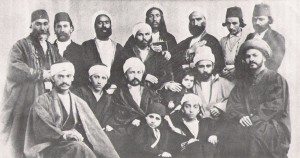 “Although many believers through their devotion, and often by sacrificing their own needs, offered gifts to Bahá’u’lláh, He usually distributed such gifts among the poor and He Himself lived with the utmost simplicity. For example, Husayn-i-Áshchí, a youth from Káshán who served Bahá’u’lláh as a cook in Adrianople and later in ‘Akká, has left to posterity the following account of the days when He stayed in the house of Amru’lláh in Adrianople.

‘This house [of Amru’lláh] was very large and magnificent. It had a large outer apartment where all the loved ones of Bahá’u’lláh used to gather. They were intoxicated with the wine of His Peerless Beauty…However, the means of livelihood were very inadequate and meagre. Most of the time there was no food which could be served to Bahá’u’lláh other than bread and cheese. Every day I used to save some meat and oil and store them in a special place until there was enough to cook. I would then invite Bahá’u’lláh to a meal on the lawn. We managed to save some money and buy two cows and one goat. The milk and yogurt which were produced were served in the holy household…

‘In the winter there was a brazier in each room. It was among my duties to light them. In order to economize I used to measure the amount of coal that I placed in each brazier. Someone had informed Bahá’u’lláh of this. He summoned me to His presence and said: ‘I hear you count the pieces of coal which go into each brazier!’ Bahá’u’lláh smiled and was very amused. He agreed that such economy was necessary in a large house.’”[2]