“Nothing is left me on this pathway. I have lost everything, including my bride. I have been able to give Him all I possessed.” 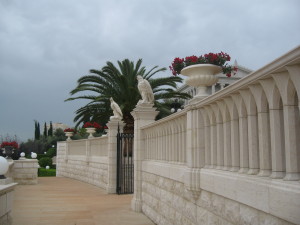 Yet another from amongst that blessed company was Ustád Ismá’íl, the builder. He was the construction overseer of Farrukh Khán (Amínu’d-Dawlih) in Ṭihrán, living happily and prosperously, a man of high standing, well regarded by all. But he lost his heart to the Faith, and was enraptured by it, till his holy passion consumed every intervening veil. Then he cast caution aside, and became known throughout Ṭihrán as a pillar of the Bahá’ís.

Farrukh Khán ably defended him at first. But as time went on, he summoned him and said, “Ustád, you are very dear to me and I have given you my protection and have stood by you as best I could. But the Sháh has found out about you and you know what a bloodthirsty tyrant he is. I am afraid that he will seize you without warning, and he will hang you. The best thing for you is to go on a journey. Leave this country, go somewhere else, and escape from this peril.”

Composed, happy, Ustád gave up his work, closed his eyes to his possessions, and left for ‘Iráq, where he lived in poverty. He had recently taken a bride, and loved her beyond measure. Her mother arrived, and by subterfuge, obtained his permission to conduct the daughter back to Ṭihrán, supposedly for a visit. As soon as she reached Kirmansháh, she went to the mujtahid, and told him that because her son-in-law had abandoned his religion, her daughter could not remain his lawful wife. The mujtahid arranged a divorce, and wedded the girl to another man. When word of this reached Baghdád, Ismá’íl, steadfast as ever, only laughed. “God be praised!” he said. “Nothing is left me on this pathway. I have lost everything, including my bride. I have been able to give Him all I possessed.”

When Bahá’u’lláh departed from Baghdád, and traveled to Rumelia, the friends remained behind. The inhabitants of Baghdád then rose up against those helpless believers, sending them away as captives to Mosul. Ustád was old and feeble, but he left on foot, with no provisions for his journey, crossed over mountains and deserts, valleys and hills, and in the end arrived at the Most Great Prison. At one time, Bahá’u’lláh had written down an ode of Rúmí’s for him, and had told him to turn his face toward the Báb and sing the words, set to a melody. And so as he wandered through the long dark nights, Ustád would sing these lines:

I am lost, O Love, possessed and dazed,
Love’s fool am I, in all the earth.
They call me first among the crazed,
Though I once came first for wit and worth.
O Love, who sellest me this wine,
O Love, for whom I burn and bleed,
Love, for whom I cry and pine—
Thou the Piper, I the reed.
If Thou wishest me to live,
Through me blow Thy holy breath.
The touch of Jesus Thou wilt give
To me, who’ve lain an age in death.
Thou, both End and Origin,
Thou without and Thou within—
From every eye Thou hidest well,
And yet in every eye dost dwell.

He was like a bird with broken wings but he had the song and it kept him going onward to his one true Love. By stealth, he approached the Fortress and went in, but he was exhausted, spent. He remained for some days, and came into the presence of Bahá’u’lláh, after which he was directed to look for a lodging in Haifa. He got himself to Haifa, but he found no haven there, no nest or hole, no water, no grain of corn. Finally he made his home in a cave outside the town. He acquired a little tray and on this he set out rings of earthenware, and some thimbles, pins and other trinkets. Every day, from morning till noon, he peddled these, wandering about. Some days his earnings would amount to twenty paras, some days thirty; and forty on his best days. Then he would go home to the cave and content himself with a piece of bread. He was always voicing his thanks, always saying, “Praise be to God that I have attained such favor and grace; that I have been separated from friend and stranger alike, and have taken refuge in this cave. Now I am of those who gave their all, to buy the Divine Joseph in the market place. What bounty could be any greater than this! Such was his condition, when he died. Many and many a time, Bahá’u’lláh was heard to express His satisfaction with Ustád Ismá’íl. Blessings hemmed him round, and the eye of God was on him. Salutations be unto him, and praise. Upon him be the glory of the All-Glorious.