Edith married William Otto Inglis, a renown journalist in 1910. William was an Episcopalian and never became a Baha’i. He worked for the New York Herald, The World and Harper’s Weekly and carried out special assignments for Joseph Pulitzer. William had several connections to American presidents, scientists and other notables. He knew John D. Rockefeller, 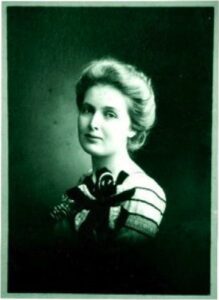 Esther Annie Magee (1853-1918) and Johnathan Magee (1849-1902) lived in London, Ontario, Canada. They had two daughters Edith and Harriet. Edith liked to visit her famous journalist uncle Guy Magee who lived in Chicago. In 1898, when Edith was seventeen years old, her uncle told her about the Baha’is after writing a story. She arranged an introduction and returned to Canada as the first Canadian Baha’i and shortly after her family became Baha’is, specifically her mother, sister and her two aunts Rose and Vail.

Edith married William Otto Inglis, a renown journalist in 1910. William was an Episcopalian and never became a Baha’i. He worked for the New York Herald, The World and Harper’s Weekly and carried out special assignments for Joseph Pulitzer. William had several connections to American presidents, scientists and other notables. He knew John D. Rockefeller, whom he helped substantially in assembling the personal archival materials on the history of Standard Oil. Believe it or not, he was among those who persuaded Woodrow Wilson to leave the presidency of Princeton University and run for governor of New Jersey. He also advised Theodore Roosevelt on Cuba and the Panama Canal. [1]

They had a son, Edward Inglis who was born on June 10, 1913 and died on August 17, 1986 and was buried in Arlington National Cemetery. Edith’s sister Harriet had tuberculosis and died at the age of thirty-two at Green Acre in January 1915 which ‘Abdu’l-Baha sent a letter to their mother. [2]

O thou afflicted one!

In this great catastrophe the eyes are weeping and the hearts are burning, because that incomparable plant was growing and developing with infinite joy and fragrance in the garden of the love of God. She was stirred into cheerfulness by the wafting of the breeze of providence; day by day she was progressing, and she was at all times the cause of the consolation of the hearts of the friends. I will never forget her, for she was one of the most important personages. But it was destined that she might become free from this material world, the world of physical sufferings and tribulations, and hasten toward the heavenly universe, so that through the showers of the cloud of grace she may obtain the utmost freshness and infinite delicacy and yield luscious fruits. Consequently be thou not unhappy, nor be thou grieved, for she is not counted amongst the dead. Nay rather she was dead, she became alive; she was evanescent, she became eternal; she was earthly, she became heavenly; she lived in the material world, she became wholly spiritual. Like unto a bird she was a prisoner and captive in the cage of this body. This cage was broken; that bird winged its way heavenward, and in the celestial rose-garden she became the associate and companion of other divine birds. Thou shalt find her in that rose-garden with the utmost joy and fragrance.

Convey on my behalf the utmost kindness and love to Mr. and Mrs. Inglis. I beg of God that in this affliction he may bestow upon them patience and consolation, and that they may educate their dear son in accord with their highest and purest standard. Upon thee be greeting and praise!

Edith and her family spent many years attending events at Green Acre Baha’i School in Eliot, Maine.[2] The Magee’s received at least nine letters from ‘Abdu’l-Baha. Edith in her own words has expressed the Master’s visit to Green Acre:

“It is hard to realize that a half a century has passed since those days. In my mind’s eye, I can still see Him, a majestic Figure, strolling on the grounds; the talk in the old Eirenion building and under the big pine tree in the pine woods, explaining the teachings of the Faith and giving us glimpses of the future… Probably many of you are familiar with the pictures of the meeting held on Montsalvat. In those days, the land was clear and one had a beautiful view of Great Bay and the river leading up to it. Many Eliot townspeople attended this meeting. After the meeting, ‘Abdu’l-Bahá and the Persians and a few of the friends went to our house, known as the Prime House situated on the Old Road. My mother, Mrs Magee and I were occupying it that summer. After tea was served, ‘Abdu’l-Bahá retired to a bedroom upstairs to rest until dinner which we were giving that evening. A couple of my sister’s friends, Louise Culver and Dorothy Carlson, were visiting us and we, earlier in the day, had gathered great quantities of fern, trailing vines and flowers to decorate the dining room. Carrie Kinney, who was familiar with Persian cooking, supervised the preparations for the meal. Finally, when all was ready, I asked one of the Persians if he would announce dinner to ‘Abdu’l-Bahá. He said, “I’ll tell you what to say and you go up”. “Alright”, I said and repeated the phrase over and over on my way upstairs. Upon entering the room I spoke my piece, whereupon ‘Abdu’l-Bahá sat on the side of the bed and rocked with laughter. What had happened? Had I lost the pronunciation or had the Persian played a joke on me? I never did find out!

After dinner, a meeting was held at the house [with] ‘Abdu’l-Bahá speaking, after which He departed for the Inn. Thus ended a perfect and full day…” [4]

Edith Magee had a deep interest in the women’s suffrage movement and participated in marches. On more than one occasion, her husband had call upon his many contacts among New York policeman to stand by to rescue Edith from any violence during suffragist marches on Fifth Avenue (M. Inglis, 1987)[1]

On April 21, 1923 Edith was elected to the New York Spiritual Assembly as the corresponding secretary.