Rizwanea gave more than 150 lectures in Toronto and 70 in Hamilton, Ontario, Toronto's expansion goal. One young friend in Toronto said, “She always knew the right answer. She never hurried you. She never seemed impatient.” Rizwanea served on that new Spiritual Assembly until she left Canada. 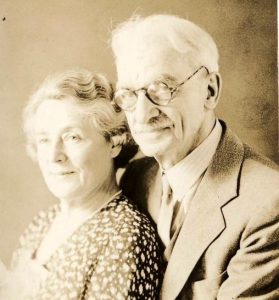 In her day they knew little of the World Order of Bahá’u’lláh. They had no books, and only a few tablets from ‘Abdu’l-Bahá.  She was asked one day how it was possible to accept this Faith. She replied, “I only knew that a Manifestation of God had again walked the earth and that was enough.”

In 1903 she married Theron Canfield Rice-Wray, who was not a Baha’i but was a friend of the Faith. Their home in Newark, N. J. was frequented by many of the early believers such as the Haneys, ‘Ali Kuli Khan, Harlan Ober, and Hooper Harris.

From 1909 to 1914, they lived in California where her teaching the Faith gradually increased with study meetings at her home in Tropico.  When she learned that ‘Abdu’l Baha had arrived in L.A., she was in the midst of moving into a new house. Dropping everything, Rizwanea arrived at the hotel with her children just as He entered the lobby. The brief time she spent with Him inflamed her spirit with the deepest longing to serve the Cause. Her marriage having ended not long after Rizwanea returned to the East and in 1919 met Howard Colby Ives (former Unitarian Minister but by that time a very active Baha’i).

They married in November, 1920. She said, “There is no greater thrill than for two souls to grow spiritually together, to explore the spiritual universe together, to learn spiritual lessons together. To share all this with one you love is a most marvelous experience.”

The first year of their marriage was spent in New York City near Grace and Harlan Ober two early Baha’is that had been joined in marriage first by ‘Abdu’l Baha followed by a civil ceremony conducted by Colby Ives. The four were closely associated in business and in the teaching work, with a love which continued unabated. Many times, the Obers or the Ives would travel long distances to help one another establish a group in virgin territory. 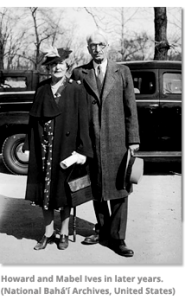 In 1921, the Ives’ made a momentous decision. In her words, “Our plan had been to earn a lot of money rapidly—enough to make us independent so we could give the rest of our lives to spreading the Cause. This proved to be a chimera, and our dream of traveling and teaching was no nearer fulfillment. One day we realized we might go on the rest of our lives trying to establish security so that we might go out in the teaching field, but never do anything but simply work and dream of this future. So, we decided that we would now go out and teach.”

“We advertised for some selling proposition for two salesmen who wished to travel, received 21 answers, chose one, and felt ready to go. We sold or gave away all our earthly possessions, reduced all our earthly goods to a trunk or two and a couple of suitcases. When we had bought our train ticket to Pittsburgh, we had just $7.00 between us.”

At first, they earned their living by making show-cards on a little machine. Later they sold an adult education courses. They spent the next 20 years, until the end of their lives, travelling throughout the U.S. and Canada spreading the message of Baha’u’llah.

Rizwanea had been brought up in the South to be a lady. One day, she turned to Howard and said, “I give up; I just can’t take it any longer!”

He replied, “Bahá’u’lláh said, ‘The only escape is in submission.’” So, she went off by herself to learn to submit. 2

Her teaching activities took her the length and breadth of the continent, from New York to California, North Dakota to Louisiana, as well as middle and eastern Canada. 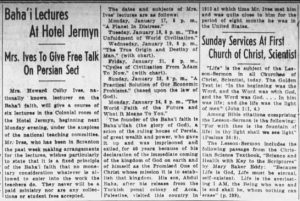 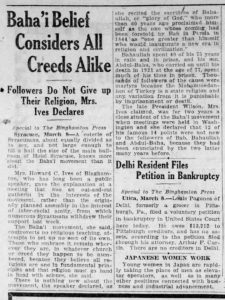 In 1937, the suggestion was made that Moncton, New Brunswick would be a fertile ground for the Cause. The Ives went. During the first six weeks of her stay, Mrs. Ives gave public lectures, radio addresses and formed a study class. She introduced the Faith to St. John, N.B., Halifax, N.S. and Charlottetown, P. E. I.  Her untiring efforts, led to Moncton, N.B. forming the first Spiritual Assembly in the Canadian Maritimes, April 21st, 1937.

In spite of Howards failing health, they travelled to Toronto in November of 1938 for ten months to assist in the formation of Toronto’s first Spiritual Assembly. Howard, although experiencing heart problems and rapidly losing both his sight and hearing complemented her abilities by doing personal deepening with receptive souls downstairs, while she would be presenting the Teachings upstairs.

Rizwanea gave more than 150 lectures in Toronto and 70 in Hamilton, Ontario, Toronto’s expansion goal. One young friend in Toronto said, “She always knew the right answer. She never hurried you. She never seemed impatient.” Rizwanea served on that new Spiritual Assembly until she left Canada.

Not long after, it was in 1941, that her beloved husband, Howard, ascended. There was no one for her to lean on or draw strength from. Her children and all the older Bahá’ís were far away. The people there were either young in the Faith or newly interested.

During the last two years of her own life she was able to combine both her former qualities and his as a Bahá’í teacher while often suffering greatly from ill health. 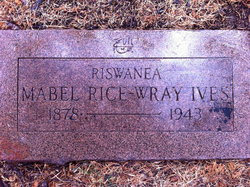 Two months later, on June 18th, following a stormy ten day illness in Oklahoma City, Rizwanea passed on. It was nineteen minutes after eight, two years, lacking two days, after the ascension of her beloved Howard.’

STAR of the WEST, SEPTEMBER 30, 1912, Letter From Los Angeles, California.