Ives graduated from the Unitarian Theological school in 1905 at age 38. In addition to his ministry he established the Brotherhood Church on Sunday evenings in a Masonic Hall in Jersey City so as to include more of humanity in spiritual endeavors. Through an associate there Ives attended his fist Baha’i meeting. 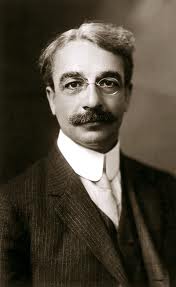 Howard Colby Ives: “Minister of the Temple of the Kingdom”

Howard Colby Ives divided his life sharply in two; the forty-six years of his life before `1912 was a period of ‘gestation’ before his spiritual ‘birth’ when he was transformed through the influence of meeting ʻAbdu’l-Bahá.

Ives graduated from the Unitarian Theological school in 1905 at age 38. In addition to his ministry he established the Brotherhood Church on Sunday evenings in a Masonic Hall in Jersey City so as to include more of humanity in spiritual endeavors. Through an associate there Ives attended his fist Baha’i meeting. Upon learning that ʻAbdu’l-Bahá was visiting New York City Ives presented himself at the Hotel Ansonia.

“My son, my very dear son,” murmured ʻAbdu’l-Bahá and embraced him deeply.

Ives later wrote, I knew then that I had found all and more than I was seeking.”

“Indeed, I was interested and my interest has never flashed from that day to this. But I never dreamed that renunciation could be so glorious.

Ives soon gave up denominational work, becoming instead a ‘minister of the Temple of the Kingdom.” A term ʻAbdu’l-Bahá had applied to him. “To be a minister,” Ives wrote, “is the prerogative of every believer in the Words of God.”

As for renunciation, he wrote: “Throw open wide the doors of the soul and He will surely enter. But, it will be in His way, not ours. The doors of the Placeless are surely wide open but it needs the blood of the lovers to adorn its lintel.”

Ives compared it to “the brilliance of the noonday sun after being shut in a dark room. The blinding is most confusing – perhaps painful – but Praise be to God, after a while the eyes become accustomed to the light and we see our way about.”

His marriage ended, Ives met Mabel Rice-Wray [Rizwanea] in 1919 and the following November they were married. One of his spiritual daughters, Doris McKay, wrote “It was like the juncture of two swift running streams: from the moment of that union the streams became a river.”

Their plan was to build a life around the propagation of the Cause of God. They settled in New York City and tried first to earn enough money to free their activities completely for a life of teaching the Faith.

In 1921 the plan changed. They disposed of their possessions and started on their long Odyssey. Their first stop was Pittsburgh, where besides working during the day they held thirty-six meetings in six weeks. From there they moved continually from one city to another.

It was indeed ‘the day for very great things.’

They spent their lives travelling throughout the U.S. and Canada spreading the message. They often gave self-improvement courses, coupled with talks on the Baha’i Faith, establishing and nurturing small Baha’i groups along the eastern seaboard and into the south.

To McKay, he wrote, “Rizwanea and I often have a yearning for a permanent place…Just as sure as this longing finds a place in our hearts we are moved again… ʻAbdu’l-Bahá’s words ‘…homeless and without rest ring in my ears.’”

In Knoxville, in 1934, Howard began to write. He was sixty-seven.

Suddenly, he had found the knack of writing vivid prose. Then, one morning he fell unconscious – his first attack of angina. He had found a gift that might have resulted in relief from economic stress only to lose the use of it almost at once. His health, always precarious, was now undeniably gone. Soon his eyesight and hearing began rapidly to go.

In 1936, in poor health and with failing eyesight Ives struggled to put down his spiritual memoirs in ‘Portals to Freedom’, his intimate account of his experiences with ʻAbdu’l-Bahá and his own personal quest for faith. It was published in 1937, followed by the ‘Song Celestial’.

Five long years of debility; first deafness, now cataracts. Ives did not live to lose his sight, which seemed miraculously extended to fill the needs of his remaining days.

In April, 1940 he wrote: “Yesterday was a marvellous day of spiritual realization, and, God willing, shall mark a new and great step on the path of reality.”

Ives reaction to his doctor’s statements was ‘a triumphant inner shout and that it was then as if a voice spoke through the doctor’s words saying, “See how I am trusting you! …you have offered your life as a sacrifice in My Path…I have taken you at your word…”

“Ever since I met ʻAbdu’l-Bahá, the path of attainment has been sincerely shown to me to be the path of self-renunciation, self-sacrifice, detachment from all save God.”

“When I recognize the undoubted fact that all this life has taught me, or could ever possibly teach me, is but a sign, a token, a symbol, of what the future worlds of God shall surely teach – my whole being is lost in thanksgiving and praise of Him Who has bestowed on me this boundless Gift and this infinite Bounty.” 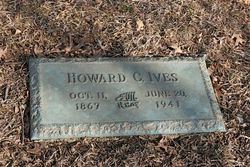 At Ridvan 1937, the Guardian launched his first Seven Year Teaching Plan for North America. At that time, Arkansas was one of six southern states having no resident Bahá’ís. Ives chose, in the last pioneering venture of his life, to establish the Faith in Arkansas, and brought Robbie Wilson, the state’s first Bahá’í into the Faith.

Howard Colby Ives, the Father of Arkansas, blessed the soil of his pioneer post with his bones on June 23, 1941 just outside Little Rock, Arkansas.

McKay wrote: “The pain in the last days was like the exquisite throbbing of violins, stabbing the heart with their terrible ecstatic beauty.”

“Then, his long patience was rewarded.”

Crowning his earthly life was the Guardian’s telegram:

For an example of Ives study of the Writings see:  The Ocean of His Utterances An unpublished study course on the Revelation of Bahá’u’lláh using the books of Bahá’u’lláh, Abdu’l‑Baha, and Shoghi Effendi, compiled and with commentary by Howard Colby Ives.