Soo as she likes to be called was born and raised in Hawai’i of Korean ancestry. She attended Bahá’í children’s classes and became a Bahá’í youth at at the age of seventeen. Three years later, at the age of 20, she married Leroy Kenneth Fouts and they were married for forty-nine years. 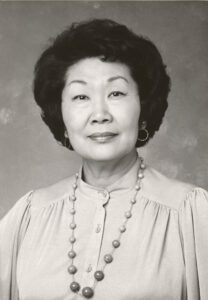 As the Bahá’í’s of the United States, Hawai’i and all over the world know this woman, a child of the Covenant and faithful maid-servant of Baha’u’llah who has lived an exemplary Bahá’í life. She has manifested those many spiritual qualities which have influenced and magnetized friend and stranger alike.

Soo as she likes to be called was born and raised in Hawai’i of Korean ancestry.  She attended Bahá’í children’s classes and became a Bahá’í youth at at the age of seventeen.  Three years later, at the age of 20, she married Leroy Kenneth Fouts and they were married for forty-nine years when he passed away in 1992.

After his death, Soo fulfilled her life-long dream and heeded the injunction of  ‘Abdu’l-Baha to pioneer. She went to China and spread the Faith.

This highly spiritual lady, yet astute businesswoman for many years, has already left a legacy which will endure for all time. Of a gentle yet forthright nature, of noble bearing; of singular dedication and unwavering faith, she has served this beautiful Faith.

Soo has served at local, national and international levels for over fifty-four years and has endeared herself to receptive hearts in America and over the face of the globe where she travelled extensively and taught incessantly. Of the highlights of her long service to the Faith too numerous to mention, she served on the Northeat Oriental Bahá’í Teaching Committee; the first Deep South Committee as U.S. representative to the United Nations Conference on ending racism and racial discrimination in Geneva in 1979; and on the Bahá’í National Teaching Committee of the United States for five years.

She was the first Asian woman elected to the National Spiritual Assembly of the Bahá’í’s of the United States where she served for ten crucial years (1976-1986) and functioned in part, as its Assistant Secretary.

During her tenure alone, she engaged in travel teaching to sixteen countries; twice attended International Bahá’í Conventions at the World Center as a delegate; and was sent as the National Spiritual Assembly representative to the dedication of the Mashriqu’l-Adhkar (Bahá’í  House of Worship) in Western Samoa where she met the only reigning Bahá’í monarch, His Highness Malietoa Tanumafili II. Soo accepted the invitation of the Continental Board of Counsellors for the Western Hemisphere to serve as an Auxiliary Board member for Propagation (1986-1993) for Alabama and Georgia and thus, with characteristic selflessness, she resigned from membership on the U.S. National Spiritual Assembly to assume this function.

Soo is one of the original acting Trustees of the Eshraghieh and Mahmoud Rabbani Charitable Trust and was appointed by Mrs. Eshraghieh Rabbani.

Soo was in Hospice care in Deerfield, Illinois after suffering a stroke the week of January 24, 2016. She passed away on February 9, 2016. She has one son, Leroy Kenneth Fouts, Jr. (goes by the name Roy), daughter-in-law Christine Fouts, granddaughter, Kai Li and grandson, Trey; and eight beloved great-grandchildren.

A small, simple and private funeral service took place on Thursday, February 11, 2016 in the afternoon. Mrs. S. Valerie Dana, Deputy Secretary of the current National Spiritual Assembly was in attendance. Mrs. Fouts gravesite is in the general vicinity of the resting place of Hand of the Cause of God Zikrullah Khadem.