On May 22, at exactly the same moment when in 1844 the Báb had declared Himself to His first disciple, Robert was in the Holy House, praying at the threshold of the Declaration chamber. On his various Visits to lran he saw other precious landmarks that would soon disappear. 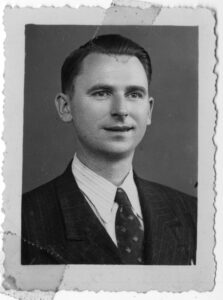 Robert Gulick, Jr., was a ‘second—generation Bahá’í through his father, Robert Lee Gulick, who had received a Tablet from ‘Abdu’l-Bahá in 1900. Robert Jr. became a believer at the age of 14, and from then on his life, wherever it took him, was single—mindedly focused on the Bahá’í Cause.

After graduating with a bachelor’s degree in social science from California State University, Chico, in 1933, he attended the University of California, Berkeley, where he received his master’s and doctorate degrees in education. He worked five years for the US. Customs Service in San Francisco, and later, having served as an economist at the Carnegie Endowment for International Peace in New York City, he returned to U.C. Berkeley as a faculty member.

Robert had the gift of making his work a part of his entertainment. He surveyed the world with a kind of amusement, enjoying the play of events and people and their foibles with real pleasure. Even so dull a procedure as shopping at the supermarket was a game to him, and he explored the aisles as if seeing them for the first time, experimenting With new products. He put his knowledge of people to work in ways that were all his own. For example, noting that many believers came late to meetings, he suggested that we should attend concerts and the opera and get the names and addresses of all the late-comers, since they were the potential Bahá’ís.

He enjoyed puns and playing with languages. He planned to write his autobiography and call it Up From Paradise. He said that when people ask you to “cooperate” with them they really mean, “You coo while I operate”. Anxious to acquire Persian, he learned to read and write the language from Marzieh Gail during his lunch breaks at the US. Customs. In Iran, when told that a certain project was impossible (mahdl), he replied, Mahdi mahdlz’h (impossible is impossible). Hiring a carriage to tour Rome, but not knowing Italian, he put his musical terminology to use (he was a fine amateur pianist) and instructed the driver: Allegro ma non troppo.

He did a considerable amount of writing, including an introduction to the 1952 US. edition of The Seven Valleys. His thesis, “Muhammad the Educator”, is of lasting value, and other works from his pen which have attracted favorable attention include “American Higher Education: Uncertain Trumpet”, and “World Trade and World Plenty”. He wrote frequent well-received letters to distinguished people and also to the press, usually With an aim to reconciling East and West.

His work for the Faith was continual and innovative. At a time when the Faith was little known, he introduced it on the radio in northern California by featuring the internationally famed artist, Max Pollak, who was friendly to the Bahá’ís and had done a notable etching of ‘Abdu’l-Bahá. He devised a pamphlet adapted to the Armed Forces, called “Headlines Tomorrow” which circulated for many years. He induced ‘Ali Kuli Khan and his daughter Marzieh to write “Mirza Abu’l Fadl in America”, a memoir published in The Bahá’í World and which otherwise might have been lost. In New York City, he planned important Bahá’í sponsored events relating to matters of current interest, such as a commemoration of Woodrow Wilson, and a Wright Brothers anniversary.  He would invite prominent non—Bahá’ís to share the platform and thus attract audiences and media coverage.

His wide range of interests included horticulture, and here again he put his finds to work for the Faith, presenting shrubs and trees to the Bahá’í School at Geyserville. He later introduced the cultivation of safflowers into Libya. 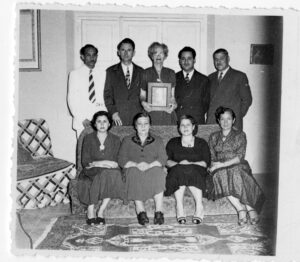 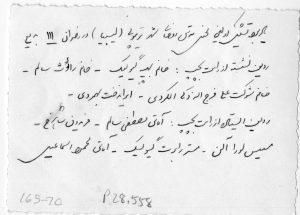 An outstanding characteristic of Robert’s was his special love for Persia, which he Visited a number of times. He seemed to the Persians like one of their own. His first Visit, in 1947, was even announced by a precognitive dream. Hushang Mavaddat told how he was standing on the steps of the Tehran Hazira when Persian friends arrived with a tall stranger, and before introductions could be made, Mavaddat said, “This is Robert Lee Gulick. A few nights ago I dreamed that he came to the entrance of the Hazira with a stranger who introduced him and told me his name.” Over two thousand came to hear him at a later meeting in the Hazira, every inch of sitting or standing room packed, and Mr. Na‘imi, son of the great Bahá’í poet, translated. Robert won the audience over with words of cheer and encouragement, interspersed with Persian phrases, and chanted prayers in the original language flavored by a touch of Western music. Persia’s national Bahá’í News and Reviews (June 1947) reported the event.

As an economist studying lran’s needs and the possibility of American investments, Robert received the red carpet treatment wherever he went. Following his pilgrimage to the House of the Báb, he travelled on With his party to Abadih and along the way found military escorts and guards of honor. Arriving in Abédih, he found crowds gathered about his new Hudson car (provided by the authorities) and voices were heard asking, “Which one is the Pope?” It turned out that a telegram from Shíráz announcing his Visit had mistakenly reported the name Hushmand Fath-i-A‘zam, a member of the group, as Pap-i-A‘zam, the great Pope.

On May 22, at exactly the same moment when in 1844 the Báb had declared Himself to His first disciple, Robert was in the Holy House, praying at the threshold of the Declaration chamber. On his various Visits to lran he saw other precious landmarks that would soon disappear. In 1948 he climbed to the top of the crumbling Ark (Citadel) Where the Bab had been confined in Tabn’z and risked his life walking around on the roof edge to reach the Báb’s cell, by then completely open to the sky, and he said this was one of the greatest experiences of his life. A picture, unidentified, appeared of this day in The Bahá’í World.

Longing to make pilgrimage, Robert had tried to telephone Haifa for permission, but because of the world situation no pilgrimages were possible then. Amatu’l-Bahá Rúḥíyyih Khanum took the call, and he seems to have told her of wanting to marry a Persian. In any case, he received a letter from her recommending that he might wish to meet Bahia [Bahíyyih] Faraju’llah. They met at a dinner party in Baghdad, Where Bahíyyih was training teachers in the Girls’ College (Dar al Muallemat), but nothing happened between them for two years. In fact, Bahíyyih went home and told her mother that the American was conceited.

Back in California, Robert brought his problem to Harold Gail; he planned on using an intermediary to tell Bahíyyih he would like to marry her. Harold replied, “You are a Westerner. If this goes through somebody else, it might be garbled. You write Bahíyyih direct.” 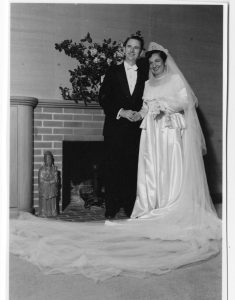 With her mother, Madame Faraju’llah, Bahíyyih went to America in 1950, and Robert met them at the airport in New York. Here a tragedy almost took place: their Visas were inadequate, and they were about to be sent home. The officials were adamant. Nothing availed until Robert went through his wallet and found a yellowed bit of newsprint headed “Confers with President” which described him “as one of the leaders of the Bahá’í movement” and “advise; to Winthrop W. Aldrich, president of the International Chamber of Commerce”, and told of his conferring at the White House with President Truman and his interest in freeing world trade. Immediately, all doors opened. Apologies were made, and the ladies were ushered into the United States. Robert and Bahíyyih were married the next day at the National Ḥaẓíratu’l-Quds in Wilmette, Illinois, and many notables of the time, including Horace Holley, Juliet Thompson, the ‘AliKuli Kháns with their daughter Hamidih, attended their reception at the Orrington Hotel.

The marriage was blessed: he and his bride grew very close. He was tremendously proud of her achievements. She earned a master of arts degree and became a sought—after speaker and a noted professor of Arabic at the American Graduate School of International Management (Thunderbird) in Arizona. She translated The Secret of Divine Civilization from the original Persian into Arabic, and translated from English into Arabic The Promise of All Ages by George Townshend. Robert also came to love his mother-in-law, a cordon bleu cook and an excellent teacher for their little boy, Husayn (Robert III). 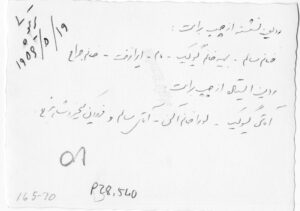 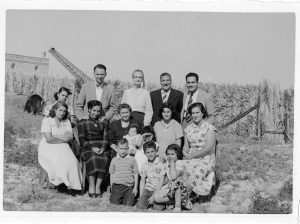 The Gulicks’ many travels together included a journey to Kurdistan, where they Visited the Takyiy-i-Mawlana Khalid, the seminary where Bahá’u’lláh had stayed. Bahíyyih acquired a property there for a future Ḥaẓíratu’l-Quds in her father’s memory.

In 1953 the Gulick family, taking Bahíyyih’s mother, Shawqat Faraju’llah, and Ella Bailey and Laura Allen with them, left to pioneer to Tripoli, Libya. There they formed a Local Assembly of which Robert was chairman. He was- also elected to the National Spiritual Assembly of Northeast Africa. He engaged in educational and business activities and Visited countries including Algeria, Egypt, ‘Iráq,

Jordan, Kuwait, Lebanon, Morocco, Saudi Arabia, Sudan, Syria, and Tunisia. These pioneering services lasted 11 years. Unfortunately, travel restrictions prevented him from meeting the Guardian in Haifa. “T hat’s what it cost me to pioneer,” he told a friend. 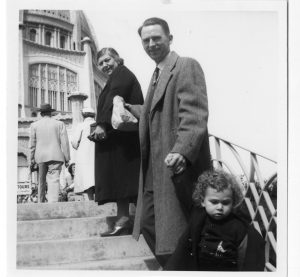 Returning to the United States in 1964, he served as Dean of Admissions at the American Graduate School of International Management (Thunderbird) for 18 years, promoting enrollment from 221 to 1,084. He taught the school’s first course on the Middle East, and was named Outstanding Educator for 1972. He became a member of American Professors for Peace in the Middle East, and is listed in Who’s Who in Asian Studies, American Men of Science, and other reference works. Meanwhile, even when ill he remained active in Bahá’í administrative affairs in Glendale and Phoenix, Arizona, usually attending the annual Bahá’í Convention in Wilmette, as a delegate.

After a long illness, Robert Gulick died on May 3, 1987. An overflowing crowd heard the eulogy, delivered by the President of the College, Dr. William Voris, as its flag flew at half mast. A scholarship for foreign students was established in his name.

Among the many tributes he received were two cherished cables from the Holy Land:

DEPLORE LOSS YOUR COMMUNITY DEVOTED ‘SERVANT BAHA’U’LLAH ROBERT L. GULICK. SUPPLICATING HOLY THRESHOLD ABUNDANT DIVINE REWARD FOR ONE WHO PLACED CAUSE GOD FIRST IN HIS TIRELESS EFFORTS PROMOTE ITS INTEREST AT HOME AND THROUGH HIS TEACHING WORK IN DIFFERENT COUNTRIES INCLUDING CRADLE FAITH AND NORTH AFRICA. HIS ASSOCATION PIONEERING ACHIEVEMENT HEROIC ELLA BAILEY UNFORGETTABLE. KINDLY CONVEY OUR SYMPATHY HIS DEAR WIFE BAHIA, HIS SON ROBERT AND OTHER MEMBERS FAMILY FOR WHOSE CONSOLATION PRAYERS BEING OFFERED.

On What would turn out to be his last birthday in this world (October 6,1986), at St. Joseph’s Hospital in Phoenix, Arizona, Robert wrote a kind of farewell to his fellow-Bahá’ís. Here, among his comments on teaching the Faith, he told of an encounter in the 1940 with Fred Schopflocher, a highly successful Canadian businessman, later designated a Hand of the Cause of God. When the two met at a railroad station in San Francisco, Robert was wondering what motivated Fred in his remarkable services to the Faith. Mr. Schopflocher answered Robert’s unspoken thought, saying, “The most important thing is to recognize the Beauty of Baha’u’llah…to recognize Him… is to love Him, to serve His Cause, and to live as He prescribed”.