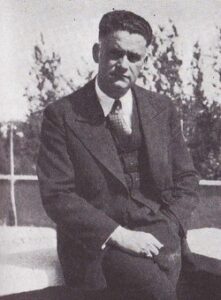 Nuri’d-Din Fath-‘Azam’s parents were from familieswell known for their wholehearted servicesand self-sacrifices for the Bahá’í Faith. Hismother was the daughter of Mulla ‘Ali-Akbar Ardistini, who together with Quddds and Mulla Sadiq-i-Khuasani, formerly known as Muqaddas, and surnamed by Bahá’u’lláh, Ismu’llahu’l-Asdaq, embraced the Cause at its inception in Shiraz, and were the first to be persecuted. His father Aqa Siyyid Shahab was the son of Mirza Fath-‘Ali, who was aware of the Mission of

Bahá’u’lláh before its declaration, and whose devotion was recognized by Bahá’u’lláh, and who surnamed him Fath-‘Azam. Nuri’d-Din’s childhood was passed in Ardistan, but when he was ten years old his father had to migrate to Tehran with him because of constant persecution from Muslim priests and mobs. ‘Abdu’l-Bahá, also permitted the family to be transferred to Tehran, where during the first years, they suffered great privations. Gradually, however, the family got over the difficulties and established a more or less comfortable home, where Nuri’d-Din was brought up in the love of the Cause of God.

He was educated in the Tarbiyat School, and attended Bahá’í teaching courses, and in both lines won the admiration of his teachers for his zeal, interest and intelligence.

When he was twenty-four, he entered the government service, and was appointed chief of the Post Office in Kirmanshah. In later years, he served as chief accountant of the late Majesty, a position he held for eleven years, proof of his honesty and ability, and was always well known as a Bahá’í.  People frequented his house and office for assistance-which he could render in his position-and they were never rejected.

He served the Cause as a member of the National Spiritual Assembly and of the Tehran Assembly with his usual diligence. He was so much occupied that his family saw very little of him, and that only at breakfast time.

He visited the Holy Land in 1942and on his return brought the glad-tidings to the Bahá’ís who had been deprived of them for many years because of unsettled conditions in Palestine. His return to Iran was the signal for many Bahá’ís to migrate and teach the Cause. Many people who met and heard him were fired with so much enthusiasm that they volunteered to forsake their interests for the Cause. Abiding by the instruction from the Guardian, he stayed in Tehran, much as he desired to go to Afghanistan and establish a Bahá’í center there. He worked, however, very hard as a member of the Emigration Committee, and was always first and foremost to help Bahá’ís who were emigrating, often at the expense of his own interests.

He undertook to repair and reconstruct the House of Bahá’u’lláh in Tehran and took a great deal of pains to complete the work according to the original design.

An outstanding work of his was compiling the Addresses made by ‘Abdu’l-Bahá which he published under the name “Khatabat,” and added it to the wealth of Bahá’í literature.

He was benevolent to friend and foe, and always extended help to people in distress, forgetting his own debts and monetary troubles. After the heart-breaking incident of his death, great was the number of people who related stories of his generosity, and who grieved over the loss of such a devoted friend. It happened like this:

After leaving his official work, he and his brother purchased a ruin of a village from the government, and did their best to improve its condition with regard to the income, health and education of the villagers. The peasants who could hardly get from their lands enough to pay their expenses for a quarter of a year, not only were enabled to meet their annual needs, but also started to buy extra accommodations. However, they proved very ungrateful for all his kind ness, and let the village be used for intrigues against the Bahá’ís.

It was on Tuesday night on August 26, 1952 at 9 P.M. when he went there as a kind father for their guidance that he was met by a fanatical mob, and was put to death in a most cruel way, thus adding his name to the immortal list of martyrs who have given their lives for the glory of the Cause.

News of his death came as a shock to the Bahá’í world. His funeral was attended both by Baha’is and non-Bahá’ís. Memorial services, worthy of his station, were held by Bahá’í communities. One service was specially held by the National Spiritual Assembly of lran as instructed by the Guardian. Many telegrams and consoling letters were received from all over the world.

His body was interred at the north section of the Bahá’í cemetery in Tehran, and the beloved Guardian gave instructions for his tomb to be erected on his behalf.

In conclusion Iquote the cablegram of the Guardian on this grievous occasion: