When on a visit to New York City, Mrs. Lewis devoted her time to spreading the teachings of Bahá’u’lláh. After a lecture, one of the members of the audience who came to speak to her was Dr. Mayo, of the well-known Mayo Brothers of Minnesota. He told her that he was impressed by her efforts to serve humanity spiritually without financial return. He said that he had noticed in her symptoms of a kidney ailment, which if treated in time, could be greatly benefited, if not cured. 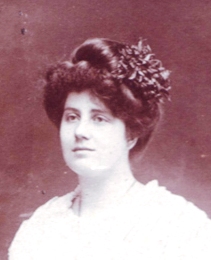 Beulah Storrs Lewis born of a well-known Mormon family in Springville, Utah. Her life had been a tree that bore much fruit. As Miss Beulah Storrs, she married Albert E. Lewis. They had no physical children, but Mrs. Lewis had a spiritual family that was indeed numerous. For Mrs. Lewis an eloquent speaker, a fluent writer and an active Bahá’í  teacher. For approximately twenty-eight years she had devoted an increasing amount of her time and her unique capacities to spreading the “Glad-Tidings” of the coming of Bahá’u’lláh.

According to her brother, Kindred L. Storrs, Beulah became a follower of the Bahá’í  Faith in California. He writes: “As I remember it, Beulah first became a Bahá’í  in 1919. I became a Bahá’í  almost instantaneously when I first learned of it through Beulah. My mother followed soon after that. My father never declared himself to be a Bahá’í , but talked Bahá’í  to practically everyone he met. Beulah attended the Brigham Young University at Provo, Utah, and later studied in England. She had a varied experience in dramatics, and had been in the movies in Hollywood in the silent days. I do know that she gave up everything, including her ambition in the field of dramatics to serve Bahá’u’lláh.

Mrs. A. C. Platt relates that, while Beulah was acting in the silent movie pictures, she met with an accident and was taken for recuperation to the home of Mother Wright, a Bahá’í  and a competent character actress. But it was at the home of Mrs. Platt that a Bahá’í  study class was conducted. Two members who attended the class regularly and expressed keen interest in the teachings were a little girl and her mother. That girl was Carole Lombard who later became a world-famous actress, and a close friend of Beulah Lewis. In the spring of 1938, Carole Lombard Gable, already a Bahá’í  at heart was encouraged by Mrs. Lewis to appear before the Spiritual Assembly of the Bahá’í s of Los Angeles and to declare her belief. She joined the Bahá’í Faith and became a member of the Los Angeles community.

When on a visit to New York City, Mrs. Lewis devoted her time to spreading the teachings of Bahá’u’lláh. After a lecture, one of the members of the audience who came to speak to her was Dr. Mayo, of the well-known Mayo Brothers of Minnesota. He told her that he was impressed by her efforts to serve humanity spiritually without financial return. He said that he had noticed in her symptoms of a kidney ailment, which if treated in time, could be greatly benefited, if not cured. Then he added that he too was trying to aid mankind in the field of physical health, and that he would like to offer her the facilities of the Mayo Brothers Clinic without cost. Though his kind and unselfish offer was deeply appreciated, she decided she could not accept it.

It was also in New York City that an enemy of the Faith came to Mrs. Lewis and offered to establish her as a minister in a church of her own, saying that from this position she could obtain both wealth and fame. Her refusal was immediate and definite.

A close friend of Mrs. Lewis, Mrs. Martin G. Carter, who lived in Los Angeles, opened her hospitable home for many years to classes that Mrs. Lewis taught of the Bahá’í  Faith. Mrs. Carter actively interested herself in inviting the open-minded and progressive among those she contacted to attend and study in these classes. She states that in her opinion possibly one hundred souls became awakened and declared themselves Bahá’ís through the effective teaching of Mrs. Lewis, either directly or indirectly.

As to the spirit which animated Mrs. Lewis as a Bahá’í  teacher, her brother has written from Salt Lake City: “She was extremely humble and grateful to Bahá’u’lláh for the inspiration which she received and for the good that so many people derived from it.”

From Miss Clara E. Weir, a close friend of Mrs. Lewis, comes this statement: “I knew Beulah in the days of her robust vitality…By her eloquence she could warm and inspire her listeners with the love of God and stimulate them to rise to heights of service…My earnest prayer for her is that doors of service may open to her in all the worlds of God.”