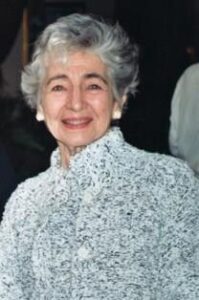 Molly attended North Texas State Teacher’s College in Denton, and graduated with a major in English from University of Texas at Austin in 1946, where she had the privilege of working for tuition as a student assistant in the Rare Books Collection of the University (then located in the famous Texas Tower). She later received a master’s degree in English from the University of Michigan, and a teaching credential from Claremont Graduate School.

In 1945, she met Charlton Russell King, LTJG, an Annapolis graduate in flight training in Odessa, Texas and Pensacola, Florida; they married the following year. Their first child, Margaret Jane, was born in 1947 at the Naval Hospital in Bethesda, Maryland. A second daughter, Charlton Anne, was born in 1951 in Ann Arbor, Michigan while Russell was teaching in the NROTC program. During Russell’s post-war service as a Naval Aviator, the Kings were stationed in French Morocco, then Naples, Italy where son Walter Russell was born in 1953. The family of five returned to the U.S. on the RMS Queen Elizabeth and settled back in Ann Arbor, where Russell attended law school at the University of Michigan, and a third daughter, Nancy Randolph, was born in 1954. In 1957 the family moved to California, first to Palo Alto, then in 1959 to Claremont. In 1963 the King family, now with their fifth child, Miriam Irene, born that same year, moved to Santa Paula. Russell’s private law practice served the community until his passing in 2006.

In March 1957 while living in Ann Arbor, Molly became a member of the Bahá’í Faith, which became the spiritual center of her life, and which she served faithfully and energetically since then. Her efforts to help end discrimination and dedication to equality and justice blossomed in the late 1950s. In service to the Bahá’í Faith, she was a member of the National Bahá’í Advisory Committee on Education, the Southern California Bahá’í Schools Committee, and a first contributor of the award-winning Brilliant Star magazine for children. Molly traveled to Nicaragua and many destinations throughout the US as a speaker and consultant for Bahá’í education, and fulfilled Bahá’í pilgrimage to Haifa, Israel in 1970. From 1976 until her retirement in 1994, Molly’s work as Program Director of the Bosch Bahá’í School in Santa Cruz, California would be her most gratifying. For many years she served on the Local Spiritual Assembly of the Bahá’ís of Santa Paula, where she was a stalwart and inspiring leader.

Molly’s home was a beacon to all, for Bahá’ís and any curious seeker and friend alike, where regular “fireside” and interfaith meetings, Bahá’í Holy Day celebrations and Feast gatherings overflowed with love and fellowship. She joyfully shared, tirelessly taught, and consistently embodied the Bahá’í tenet of the unity of the human race.

Molly’s interests and commitments to the city of Santa Paula were many. From 1990 to 2004 she served as a volunteer docent/tour coordinator at the California Oil Museum. She could often be seen greeting guests arriving at the Santa Paula Train Depot, leading historic walking tours and promoting the town’s museums, murals, and airport. She cultivated Elderhostel (Road Scholar) programs in Santa Paula with its co-founder, Marty Knowlton, served on the Santa Clara Valley Hospice Board, and for many years led home tours for their annual fundraiser. She was honored by Santa Paula’s Women of History, taught Parent Effectiveness Training, coached by its founder, Thomas Gordon, was a driving force in Tale-Spinners, a group that showcases Ventura County figures of historical note, and with her late husband was a member of the Friends of Blanchard Library. Neighbors will remember her generous “open swim time” when she welcomed any and all to enjoy her backyard pool “when the flag is out.” She was a gracious host, delighted in thoughtful conversations, and loved making connections between friends in her vast local, national, and international circle. Her grace and love, outreach and involvement, hospitality and friendship, dedication and inexhaustible energy have left a mark that will continue to reverberate around the world.

Molly remained an active Santa Paula citizen until 2012 when she moved to the Ventura Townhouse, then to Kerman to be near son Walter (and wife Connie), and spent her last months with daughters Anne and Mim in Santa Monica. She spent her final days surrounded by family and friends sharing prayers, songs, and happy reminiscences. She wanted all to know this passage from the Bahá’í Writings: “I have made death a messenger of joy to thee. Wherefore dost thou grieve?” Her memory will be cherished by all who knew her.

Moly lived 91 “lucky and wonderful years,” as she often said herself.