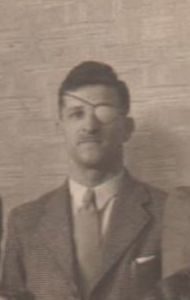 Eric Manton was an Englishman and towards the end of the Second World War, in which he served with credit in the British Army, was wounded and lost his left eye. In his search for permanent world peace, was serious in his consideration of the merits of Communism. However, he saw a notice of a Baha’i public meeting to be held in the Library in Northampton, where the speaker was Marion Hofman. He went to this meeting and his attention was caught.[1]

With the approval of close family members (Eric was a widower), he left by sea on December 29, 1951, with his 13-year-old son Terrence, on a five-week journey through the Mediterranean and the Suez Canal, then down the east coast of Africa, reaching Dar es Salaam on January 24, 1952.

There he was met and welcomed by Mr. Jahil Nakhjavani, and stayed in the home of Hassan and Isobel Sabri. He had served with Isobel on the historic first Local Spiritual Assembly of Edinburgh. Eric and Terry proceeded to Beira where they disembarked and went overland by rail to Livingstone, then to Lusaka, the capital of Northern Rhodesia (as Zambia was at that time known) on the morning of February 8, 1952. Not only was Eric the first pioneer in that country; he was the first pioneer in southern Africa.

An electrician by trade, he secured a position with the Government’s Public Works Department in Livingstone. Some months later he was transferred to the Copperbelt, where he lived in Kitwe although his area included other nearby towns, and he became a familiar figure as he moved about training and supervising his workmen. He once told me how his watchword became ‘Do a good job’. Some years later, when he was living and working in Luanshya in his own electrical contracting business, he was reminded of this when his foreman, with whom he was discussing the work programme and to whom he suggested a short cut, replied, ‘Remember, boss, always do a good job.’ Eric told the tale with relish and a degree of pride.

From Kitwe, he was able to teach the Faith and Miss Jessie Frankson, a nurse at the Government Hospital in Luanshya, became a Baha’i in April 1955. In October of that year, Eric and Jessie were married and shortly after this, in February 1956, the couple and Terry transferred to Fisenge where they had a small- holding, raising vegetables and poultry for the Luanshya market, while Eric established himself as an electrician. Jessie had an adopted daughter, Mary, so the family of four were involved in the teaching work on the Copperbelt. This area had already been opened to the Faith by Eleanor and Lyall Hadden and their family who had gone to South Africa in December 1953 and moved to Luanshya, Northern Rhodesia, in August 1955. It was here that at Ridvan 1956 the first Local Spiritual Assembly in Northern Rhodesia was formed and a neighbouring village of Fisenge, where the first local woman embraced the Faith, was opened. After the departure of the Hadden family in October 1956, the Mantons filled the gap and proceeded to work with and encourage the believers to erect the first local Quds in Zambia in Fisenge. Teaching was also done in Kitwe, the principal town of the Copperbelt, where the second Local Spiritual Assembly was established.

In the course of a visit to the remote North Western Province of Northern Rhodesia in 1962, Eric and Jessie observed the potential there for the spread of the Faith and called the attention of the National Spiritual Assembly of the Baha’is of South and West Africa to the possibilities. A project was planned and proven teachers such as Florence Muruma, William Masehla, Max Seepe and his wife, Rudolpho and Angelica Duna from South Africa, and George Mpayila from Nyasaland all spent time in the area assisting in the achievement of the one outstanding goal of the Ten Year Crusade for the Southern Africa region ‘to begin the process of large scale enrolments’. By Ridvan 1963 there were 1,000 believers in the Mwinilunga area. Eric and Jessie were the backbone of the campaign, making many hazardous journeys of 500 miles over roads hardly worthy of the name and almost impassable in the rainy season, to reach the friends, who were them- selves accepting responsibility for the spread of the Faith.

During the last two years of his life, his activities were perforce curtailed, but his interest in the progress of the Cause, and his encouragement to all, never faltered. He passed away peacefully in his sleep, five days before his seventy-third birthday. The Universal House of Justice sent the following cable to the National Spiritual Assembly: