A shining event in William’s life was the dedication of the Kampala Temple which he was ‘privileged to attend in January 1961. He remarked of it, ‘What a joy it is to be amidst so many Bahá’í friends.’ In 1963 he was present in Haifa for the election of the first Universal House of Justice and, as part of the delegation from Southern Africa, proceeded to attend the World Congress in London. He was keenly aware of the greatness of the Cause manifested in that gathering in Albert Hall. He used to say, ‘You could not resist the mighty power of God packed in that hall where the first international House of Justice was sitting.’ 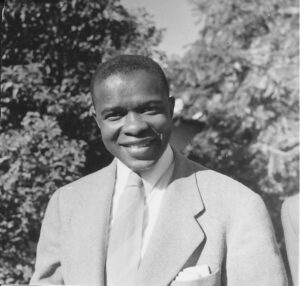 William Mmutle Masetlha was a member of St. Peter’s Anglican Church from childhood. Due to lack of funds he received only a primary and secondary education and was unable to attend high school. He started working as a welder at the early age of fifteen. At the time of his passing he had been working for many years as head of the photocopy and filing department of a brokerage firm, and was highly valued by his employer.

In 1952 William met Daphne Senne whom he married on October 15 of that year. She had been born into the Senne family of Kgale in the village of Phokeng, near Rustenburg. The couple were blessed with six lovely children: Matilda, Faith, Billy, Bahíyyih, Elise and Gregory.

William was introduced to the Bahá’í Faith in the fall of 1954 by his sister-in-law, the late Mrs. Dorothy Senne. He then met the early pioneers and attended several talks on the new Revelation. Inspired by what he heard, William accepted the Faith and, to a great extent, was deepened in his understanding of it by William and Marguerite Sears. In 1955, Daphne also embraced the Faith.

From the moment he became a Bahá’í, William expressed his love for Bahá’u’lláh through courageous and indefatigable service. Through his tireless efforts beginning in 1955, the Cause was established in the mountains of Lesotho, the Cape escarpment and Karoo region, the desert of Kalahari and Namibia, the rural areas of the Transvaal, the plateau of the Orange Free State, the protectorates of Botswana and Swaziland, and other black states in southern Africa. He was a member of the first Local Spiritual Assembly of Alexandra in 1956, moved to Dube (Soweto) in 1957 and became a member of the Dube/Mofolo Spiritual Assembly in 1958.

In 1956, the first National Spiritual Assembly of the Bahá’ís of South and West Africa was formed. William was one of the nine elected and except for one year served on it in various capacities, including recording secretary and corresponding secretary, until 1968 when he was appointed to the Auxiliary Board.

A shining event in William’s life was the dedication of the Kampala Temple which he was ‘privileged to attend in January 1961. He remarked of it, ‘What a joy it is to be amidst so many Bahá’í friends.’ In 1963 he was present in Haifa for the election of the first Universal House of Justice and, as part of the delegation from Southern Africa, proceeded to attend the World Congress in London. He was keenly aware of the greatness of the Cause manifested in that gathering in Albert Hall. He used to say, ‘You could not resist the mighty power of God packed in that hall where the first international House of Justice was sitting.’ It was William who chaired the final session of that Congress on May 2, and in that poignant moment when Amatu’l-Bahá Rúḥíyyih Khánum broke down during her telling of the story of the life of Shoghi Effendi, it was he who started the singing of Allah’u’abha. William Masehla’s twenty-nine years of dedicated service were crowned by his appointment in 1976 as a member of the Continental Board of Counsellors. Despite ill health arising from a rare bone disease, acute multiple myelome, he discharged his duties with true distinction. His strong will and radiant spirit carried him to Haifa to attend the International Convention in April 1983. He passed away quietly on July 17, 1983. An account of his funeral, which appeared in the September 1983 issue of the International News Service, reads, in part: ‘Six hundred people came from all over southern Africa to attend the funeral of Counsellor William Masehla on July 24 at his family home in Soweto… Tributes from National Spiritual Assemblies and individuals were offered, interspersed with songs and prayers Flowers, beautiful and profuse, covered the grave of one whose happy radiant smile will linger always in memory…All of southern Africa mourned him, mourners coming from Botswana, Bophuthatswana, Lesotho, Swaziland, Venda, Ciskei, Transkei, Namibia and many cities of South Africa. The International Teaching Centre in a special tribute spoke of the sweetness of his personality, his total dedication and his devoted services despite suffering and ill health.’

Those who knew Counsellor William Masetlha know how richly he was endowed with the qualities of love and humility. He was a keen observer of his fellow-men and his observation was tempered with deep compassion. He reflected on all that he heard and read, and carried into every experience of life his torch of sincerity, not only as a guide to his own path but as a light and stimulus to those about him. The theme of his words was always the same: the radiance and capacity implanted in each human soul; the Value of each one’s contribution; the need to carry on the work of the Faith ever hopeful and assured. ‘With or without you’, he repeatedly said, ‘the Cause will grow and expand. It is the plan of Almighty God, not yours.’

On July 17, 1983 the Universal House of Justice sent the following cable to the National Spiritual Assembly of South and West Africa with instructions that it be shared with all National Assemblies in Africa:

Founded in 1995, the William Mmutle Masetlha Foundation (WMMF) is a Baha’i organization that supports education and vocational training initiatives in Zambia. Its parent organization, the Masetlha Institute, was founded in 1983 and offers community-based education in areas including literacy and health, as well as spirituality. One of the WMMF’s initiatives, the Banani International Secondary School, is a residential girls’ school specializing in science and agriculture; in 2003, the Banani School was ranked among the top 100 African secondary schools. WMMF is also partnering with FUNDAEC (Foundation for the Application and Teaching of the Sciences) to develop a secondary education/vocational training preparation program for rural youth.