From morning till dark he worked at his craft, and almost every night he entertained the friends at supper. 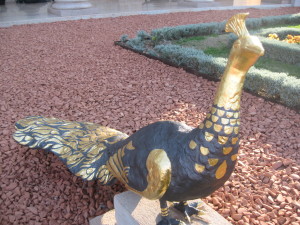 This eminent man had high ambitions and aims. He was to a supreme degree constant, loyal and firmly rooted in his faith, and he was among the earliest and greatest of the believers. At the very dawn of the new Day of Guidance he became enamored of the Báb and began to teach. From morning till dark he worked at his craft, and almost every night he entertained the friends at supper. Being host in this way to friends in the spirit, he guided many seekers to the Faith, attracting them with the melody of the love of God. He was amazingly constant, energetic, and persevering.

Then the perfume-laden air began to stir from over the gardens of the All-Glorious, and he caught fire from the newly kindled flame. His illusions and fancies were burned away and he arose to proclaim the Cause of Bahá’u’lláh. Every night there was a meeting, a gathering that rivaled the flowers in their beds. The verses were read, the prayers chanted, the good news of the greatest of Advents was shared. He spent most of his time in showing kindness to friend and stranger alike; he was a magnanimous being, with open hand and heart.

The day came when he set out for the Most Great Prison, and arrived with his family at the ‘Akká fortress. He had been afflicted with many a hardship on his journey, but his longing to see Bahá’u’lláh was such that he found the calamities easy to endure; and so he measured off the miles, looking for a home in God’s sheltering grace.

At first he had means; life was comfortable and pleasant. Later on, however, he was destitute and subjected to terrible ordeals. Most of the time his food was bread, nothing else; instead of tea, he drank from a running brook. Still, he remained happy and content. His great joy was to enter the presence of Bahá’u’lláh; reunion with his Beloved was bounty enough; his food was to look upon the beauty of the Manifestation; his wine, to be with Bahá’u’lláh. He was always smiling, always silent; but at the same time, his heart shouted, leapt and danced.

Often, he was in the company of ‘Abdu’l‑Bahá. He was an excellent friend and comrade, happy, delightful; favored by Bahá’u’lláh, respected by the friends, shunning the world, trusting in God. There was no fickleness in him, his inner condition was always the same: stable, constant, firmly rooted as the hills.

Whenever I call him to mind, and remember that patience and serenity, that loyalty, that contentment, involuntarily I find myself asking God to shed His bounties upon Áqá ‘Alí. Misfortunes and calamities were forever descending on that estimable man. He was always ill, continually subjected to unnumbered physical afflictions. The reason was that when at home and serving the Faith in Qazvín, he was caught by the malevolent and they beat him so brutally over the head that the effects stayed with him till his dying hour. They abused and tormented him in many ways and thought it permissible to inflict every kind of cruelty upon him; yet his only crime was to have become a believer, and his only sin, to have loved God. As the poet has written, in lines that illustrate the plight of Áqá ‘Alí:

By owls the royal falcon is beset.
They rend his wings, though he is free of sin.
“Why”—so they mock—“do you remember yet
That royal wrist, that palace you were in?”
He is a kingly bird: this crime he did commit.
Except for beauty, what was Joseph’s sin?

Briefly, that great man spent his time in the ‘Akká prison, praying, supplicating, turning his face toward God. Infinite bounty enfolded him; he was favored by Bahá’u’lláh, much of the time admitted to His presence and showered with endless grace. This was his joy and his delight, his great good fortune, his dearest wish.

Then the fixed hour was upon him, the daybreak of his hopes, and it came his turn to soar away, into the invisible realm. Sheltered under the protection of Bahá’u’lláh, he went swiftly forth to that mysterious land. To him be salutations and praise and mercy from the Lord of this world and the world to come. May God light up his resting-place with rays from the Companion on high.