While in his thirties, he became acquainted with a musician named Haji Khán who was in the entourage of the Governor of Isfahán and was a Bahá’i. Ustád Nasru’lláh was fond of music and wanted to learn to play an instrument. He took music lessons with Khán and their friendship grew deeper leading to Ustád Nasru’lláh accepting the Bahá’i Faith. His ardour of the Faith was such that he decided to carve the twelve principles of the Faith on the flank of a mountain facing the city. There is a spring on that spot named ‘The Point’. 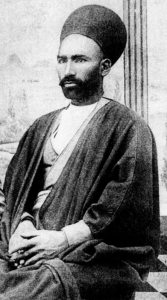 One of the delights of my childhood was to go and visit Ustád Nasru’lláh and get absorbed in his extensive library of Architectural books and magazines as well as to listen to stories of his innovations and arduous work. I never realized what a genius he was until I started to explore the history of the Bahá’i Faith, film, photograph and document the Holy Places of the Faith in Irán. He was a distinguished master of traditional Iranian architecture, design and plaster floral work.

Generations in his family were well-known architects and designers. Ustád was indeed one of the most distinguished and learned his craft from his father and the masters of his time. Soon he became well-known in the field, particularly in design and execution of plaster floral work; an ancient Iranian art of centuries ago. He was frequently invited to repair and rebuild the historical frescos of old buildings in the country.

While in his thirties, he became acquainted with a musician named Haji Khán who was in the entourage of the Governor of Isfahán and was a Bahá’i. Ustád Nasru’lláh was fond of music and wanted to learn to play an instrument. He took music lessons with Khán and their friendship grew deeper leading to Ustád Nasru’lláh accepting the Bahá’i Faith. His ardour of the Faith was such that he decided to carve the twelve principles of the Faith on the flank of a mountain facing the city. There is a spring on that spot named ‘The Point’. The Blessed Báb, on His way to exile, before entering the city of Isfahán, pitched His tent there for a couple of days. Ustád Nasru’lláh took his workers to that area and day and night they worked laboriously on this task. Before the project ended, one day the Governor Zill’u’l-Sulán, was scanning the horizon with his monocular and observed the activities on the mountain. He immediately called his officers to go and investigate the matter. The clergy headed by the “Son of the Wolf” also followed. Ustád Nasru’lláh and his workers were seized and the fresco was destroyed. Today that area around the spring has become a beautiful public park and the fresco, although void of any inscription, is illuminated with colorful lights!

In the early 20th Century and beginning of a new dynasty, Iran started an era of modernism and rebuilding. One of the initiatives was to establish an office of restoration of historical monuments. The government invited all the distinguished craftsmen in the country to cooperate with this new institution and Ustád Nasru’lláh was naturally one of the masters in that office. He dedicated his life to this important task and managed to repair and rebuild numerous historical sites in Isfahán, Yazd, Kirmán, Ardibil, and Qum some of which were over a thousand years old. The historical buildings suffered vandalism and fell into a terrible state of unrepair during the Qájár dynasty. The most precious art pieces were taken from the sites and were placed in the homes of Princes as decorative objects or sold to foreign art dealers. Among Ustád Nasru’lláh’s outstanding restoration plaster works are an eight Century niche of Uljáytu (Mihráb) in Isfahán Friday Mosque, a floral plaster and color glass window located at the Palace of Chehel Sutun and another plaster floral Mihráb in Darb-i-Imám Mosque.

His most notable works in ceramic designs and innovations are the entire design of floral pattern and color concept at the entrance door to the Mosque of Shaykh Lutf’u’lláh and the Mosque of Sháh, both from Safavid period. The entire design is a recreation from whatever was saved from the Qajár era! Later on, a replica design from the entrance to the Mosque of Sháh was rebuilt in Doris Duke’s Shangri-La Center for Islamic Arts in Hawai’i. Ustád was the one who rediscovered the natural process of tiles coloring extracted from flowers and plants and used this technique in his work in such a way that it is impossible to distinguish between the work of Safavid era and his restoration work. Among all those remarkable works, there is only one inscription bearing his name located in one of the Safavid buildings.

Mosque. Inspired from only a few remaining ceramic tiles, Ustád Nasru’lláh recreated the complex Quránic verse of the 8th Century and completed the work which amazes the observer. It was for this outstanding recreation that he was entitled ‘Magic Pen’!  He was also an affiliated consultant of the office of Restoration and repair of the Historical Monuments for which he travelled all over the country. Several generations of fine arts builders and designers were trained by Ustád Nasru’lláh.

His other services were to repair the historical houses of Imám Jumih of Isfahán and that of the King and Beloved of Martyrs where the Báb resided. The house of Imám Jumih has an intricate floral plaster and mirror ceiling which has never been repaired due to the complexity and fineness of its structure. I heard from Ustád Nasru’lláh’s grandson that he used to mix the plaster in the palm of his hand in order to always have a fresh mixture, to accomplish the delicate work.

Another masterpiece was the monument on the Hand of the Cause of God, Mrs. Kehler’s resting place who passed away in Isfahán. This monument which consisted of a porcelain globe of three meters’ diameter and a pedestal was a fine masterpiece indeed, which was destroyed due to a severe winter in the city (a small scaled replica of the porcelain globe is found in the Versailles Palace in France). The monument which was a partnership project with Ustád Nasru’lláh’s son-in-law (Haji Iskandar of Shiráz, an architect and designer of several generations in that city), was replaced later by a stone globe.

Due to his belief in the Bahá’i Faith, there is only one document related to the restoration of ancient Persian monuments mentioning Ustád Nasru’lláh’s contributions in the field; nonetheless, praiseworthy mentions are made in French Architectural books. In 1928, André Godard, an archaeologist, architect and historian of French and Middle Eastern Art was granted the directorship of Iranian Archeological Services. Upon his visit to Isfahán, he became acquainted with Ustád Nasru’lláh and remained a life long friend. He wrote a four volume book about the Historical monuments of Iran in which he mentions the services of Ustád Nasru’lláh in this field.

Like numerous artists and craftsmen in this world, Ustád Nasru’lláh’s life ended in utmost poverty following an accident due to an unsafe scaffolding structure at the Yazd Friday Mosque. His irregularly paid pecuniary was not enough for his family expenses. His property was pillaged due to unwise urban planning. His income was narrowed to whatever he could receive from private carpet weavers for whom he drew carpet patterns. A year or two before he passed away, the district authorities finally acknowledged Ustád Nasru’lláh’s contributions to revival and restoration of ancient monuments of Iran through a private ceremony at the Isfahan District Office. The only people present were the District Governor General, the Director of District Education Authority and Ustád Nasru’lláh’s son.