Shoghi Effendi recognized the extent to which Sylvia’s efforts aided the progress of the teaching work. Here is what the Guardian wrote in 1946, after Leroy got a promotion and was transferred to Chicago.

Sylvia Kulman married Leroy Ioas in 1919, and soon after that the young couple moved to San Francisco.  For a while the two newlyweds lived at the Bahá’í Center, and assumed the responsibility of keeping the Center open. Later, after they had moved into a home, they hosted many Bahá’í study classes in that same residence.

Leroy once described his wife as a “tower of spiritual strength.”[1] His description managed to highlight her support for his many activities. In addition to providing her husband with a tremendous amount of support, Sylvia helped Leroy to champion the cause of Bahá’u’lláh, while providing him with a loving companion.

Shoghi Effendi recognized the extent to which Sylvia’s efforts aided the progress of the teaching work. Here is what the Guardian wrote in 1946, after Leroy got a promotion and was transferred to Chicago. That transfer represented the fulfillment of the Leroy’s desire to assist the NSA in a more active fashion.  It also provided the Guardian with the chance to pen these remarks to Sylvia:

Without the steady faith and tireless devotion [that Leroy] brought to bear on the teaching work of North America, the Plan might not have gone as smoothly to victory as it did.[2]

In December of 1951, Leroy became a Hand of the Cause. After consulting with his wife Sylvia and with Mrs. Amelia Collins, he and Sylvia prepared to go to Haifa. The two of them arrived in Haifa on March 17, 1952. 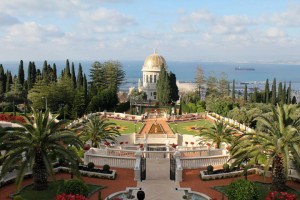 While in Haifa, Sylvia helped to welcome all the Bahá’ís on pilgrimage. She also agreed to serve as a witness, when a witness was needed. Her willingness to serve in that manner allowed her to be present at a most momentous occasion.

On December 2, 1957, the title to the Shrine of Bahá’u’lláh, the Mansion of Bahji and all other buildings and lands that had been owned by the covenant breakers were passed to Israel’s branch of the U.S. NSA. Documentation of that transfer was signed by Leroy Ioas, and the signed document showed that Sylvia had served as the witness, as that same transfer was made official. [2]

In 1964, Sylvia joined her husband as he embarked on a visit to the United States. During his visit he spoke a numerous Bahá’í gatherings. The National Spiritual Assembly appreciated the efforts extended by Leroy and Sylvia; in fact the Assembly acknowledged those same efforts in a letter that it sent to the Hand of the Cause on August 25, 1964. Here is a passage from the letter:

“We cannot express in words how grateful we are to you and Sylvia for the inspiration which you have given to so many hundreds of new believers.” [2]

That same trip managed to put a real toll on Leroy’s health. He and Sylvia returned to Haifa in October of 1964, and Leroy passed to the next kingdom on July 23, 1965. Sylvia offered her husband unwavering support and undying companionship throughout the final months of his life.

Editor’s Note:
According to daugther Anita Ioas in the book “LeRoy Ioas – Hand of the Cause”, Sylvia Kuhlman died on August 24, 1983 in Alexandria, Virginia and is buried in Washington, DC. A special thanks to Don Calkins who researched and obtained this fact in addition to her date of birth.

Fortunately, Sue had written scores of newspaper articles for various Baha'i communities, and had edited a newsletter for the N. New Mexico Extension Teaching Committee. For that reason, she was able to become a freelance writer, beginning in the spring of 2004.