After the second convention, when the Baha’i Temple Unity resulted, Mountfort Mills was the president of the first Executive Board, of New York City, and visited the Center of the Covenant who was still a prisoner of the Turkish Government, though liberated in July of that same year, 1908. 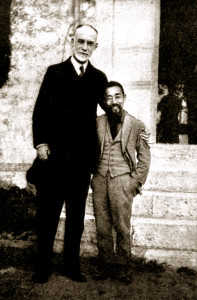 Mountfort Mills (the spelling of his first name spelled as Montfort) received a tablet from ‘Abdu’l-Bahá saying:

“The Mashriqu’l-Adhkir of Chicago is of the greatest importance. This, Bahá’í temple is a supreme house of worship, a place of spiritual gathering and of the manifestation of divine mysteries. The friends of God must endeavor with all their hearts and souls that this structure may be raised and completed.”[1]

Mountfort was one of the members of the Executive Board of Bahá’í Temple Unity.  After the second convention, when the Bahá’í Temple Unity resulted, Mountfort Mills was the president of the first Executive Board, of New York City, and visited the Center of the Covenant who was still a prisoner of the Turkish Government, though liberated in July of that same year, 1908. Mr. Mills wrote: “At the temple convention, he seemed most pleased and satisfied and assured us that the future would see many more, constantly increasing in numbers, attending and bringing together representatives from all parts of the world. He said that these gatherings would be to the spiritual body of the world what the inrush of the spirit is to the physical body of man, quickening it to its utmost parts and infusing a new light power.” [2]

The annual meeting continued as a “Souvenir of ‘Abdu’l-Bahá,” and founded by Him personally at West Englewood. New Jersey in June 1912. Each year on this anniversary, Mr. Roy C. Wilhelm and his mother lovingly welcomed as guests of ‘Abdu’l-Bahá the Bahá’ís and their friends from all over the world. Several hundred gathered on June 25th, 1927, to commemorate the founding of the Feast and the visit of ‘Abdu’l-Bahá fifteen years ago.

Mr. Mountfort Mills, who has so adequately brought from Haifa after his long sojourn with Shoghi Effendi the peace and refreshment of that unique and potent spot, read the Words uttered by ‘Abdu’l-Baha on the occasion when that now historic group first gathered here as His guests. This was followed by a vigorous exposition of the Bahá’í teachings and principles set forth by Mr. James F. Morton. Mr. Morton, a scholar, scientist and linguist of note, eloquently told the story of how the breadth and sanity of the Message of Bahá’u’lláh had rescued him from atheism and the cynicism of a materialistic outlook.

Mr. Morton was followed by the Rev. Richard Bolden, pastor of the Harlem Immanuel Church who spoke with the fire and feeling of his gifted race, on the significance of ‘Abdu’l-Baha as a racial unifier. [3] After the passing of ‘Abdu’l-Bahi in 1921, the Guardian who was appointed in His Will and Testament summoned two American Bahá’ís for conference in Haifa: Roy Wilhelm and Mountfort Mills. [4]

Editor’s Note:
Regarding Green Acre Bahá’í School. The Farmer’s took the Bahá’ís to court who were represented by John Mitchell, a brilliant lawyer and who, at that point, had never lost a case. The Bahá’ís were represented by Montfort Mills, and the Bahá’ís won. They won the freedom and safety of their radiant and devoted sister Sarah Farmer and they won Green Acre.[5] Additional information from Horace Holley’s tribute to Montfort Mills is available in Volume XI of The Bahá’í World, (1940-1950).
There are many different spellings of his name Mountfort and Montfort. We wanted to make sure we directly lifted them as they were originally referenced.
He was married to Adele. The information about his place of birth comes from his 1920 passport which is signed by him.